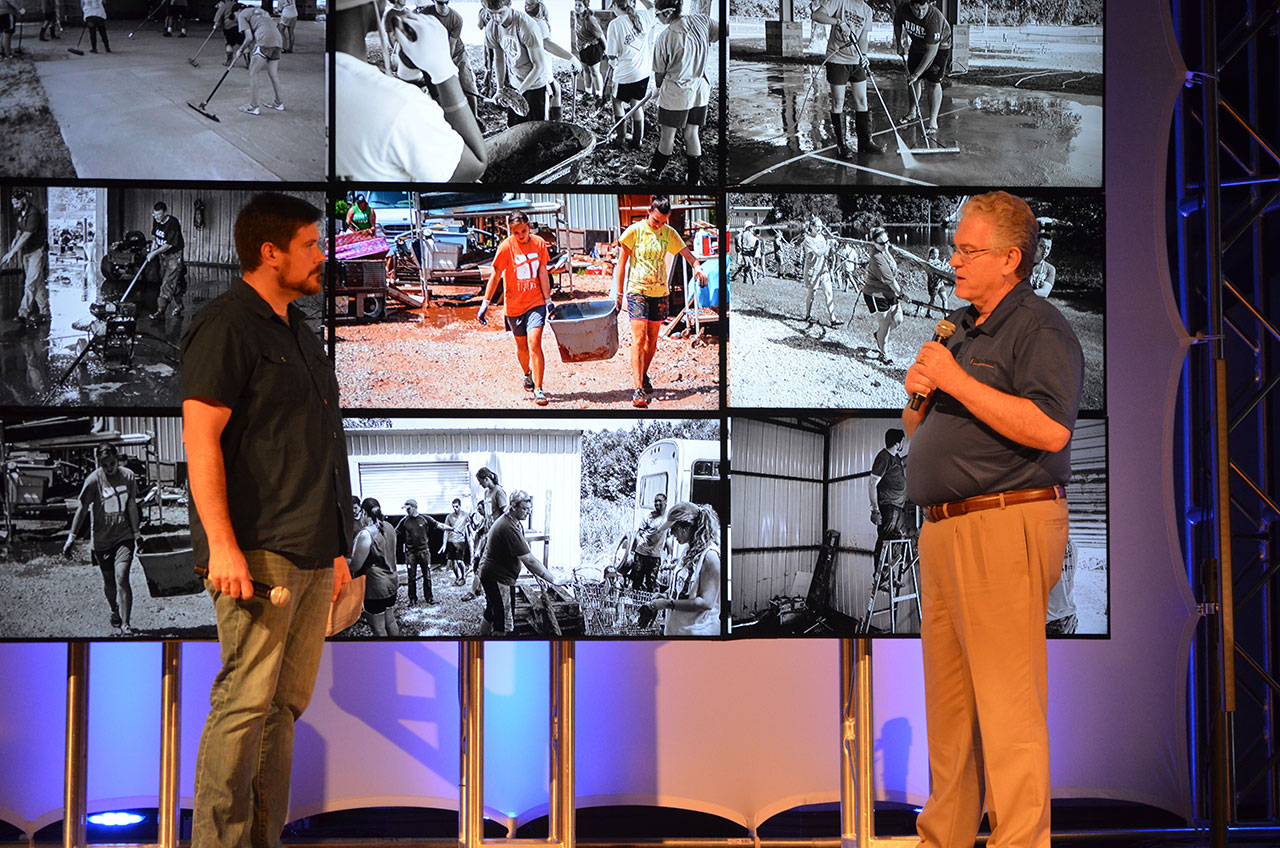 DAVIS – The summer youth weeks at Falls Creek Conference Center have seen unexpected events happen near the end of June. A major flood on June 17 forced an early conclusion to the Week 3 (June 15-19) experience, and Week 4 (June 22-26) had to be cancelled in order to recover from flooding results.

Thankfully, the safety of all Week 3 camp participants was not in danger, and Falls Creek’s staff members and consultants worked diligently throughout the follow-up to make sure the rest of the summer camp weeks, beginning Week 5 (June 29-July 3), remain on schedule.

Since Week 4 did not happen, Falls Creek programming leadership offered a livestream service, June 24, at www.skopos.org/livestream for online observers to get an update from Anthony Jordan, executive director-treasurer of the Baptist General Convention of Oklahoma, and to experience a Falls Creek evening service from the Tabernacle. An estimate of more than 1,300 viewers (not counting how many total students at church groups were viewing) logged on to watch the Wed. evening service. 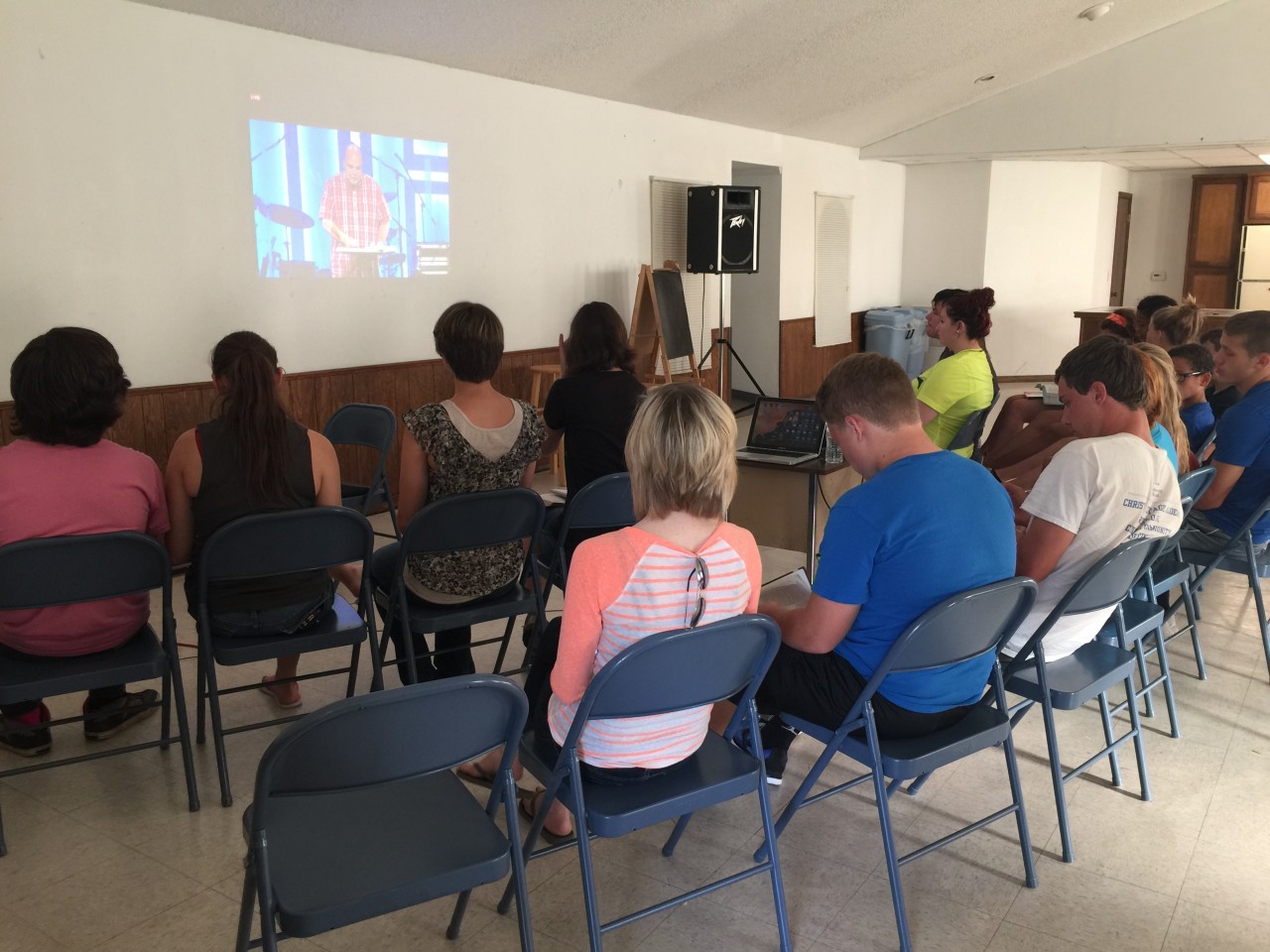 The service began with a Q&A session, with Todd Sanders, Falls Creek program associate, offering questions to Jordan who provided answers regarding the events that happened during Week 3, especially since social media and news reports were offering information that caused many questions and inaccurate conclusions.

“First thing is, don’t believe everything you see in the news,” Jordan said in his opening remarks. One incident in particular that caused a stir was a photo released through social media of a bus in a flooded creek bed. “The bus rolled into the creek. Nobody was in it. Nobody was near it,” he said.

Jordan explained there was major flooding on the Washita River, located near the conference center, and flooding affected some of the encampment’s facilities. “But the fact of the matter is, safety was the first importance,” he said. “All students were safe. Nobody was in jeopardy at all.”

An area that was significantly affected, Jordan said, was the conference center’s new wastewater facility, which was built two and a half feet over the historic flood stage. The facility was overrun by water. “We were up six feet in the (facility’s) chemical building,” said Jordan, sharing his appreciation for Wynn Construction, which built the wastewater facility, and how the company helped assess the damage.

“Good news is that we are going to be able to get through camp moving forward,” he said. “Then we will have to come back and address all kinds of other issues. We’ve lost our maintenance facility. We’ve lost all of our equipment down there. But God has been good. We’ve had some people step up and help us.”

Jordan was happy to share the news that the remaining weeks of Falls Creek will continue. “This is a great day. We have been working through the last hours, making that decision (to continue the summer camp weeks). All of the pieces fell into place. All the temporary fixes are in place. We are going to have Week 5 and the rest of the summer weeks. We plan to finish this summer in great style.”

The Falls Creek summer staff received great praise from Jordan. “Our Falls Creek staff, beginning from top to bottom, have given themselves fully to the task of getting this camp back up and running, as well as down at Cross Timbers,” he said, mentioning the Cross Timbers Children’s Mission Adventure Camp, located outside Davis, near Falls Creek. Cross Timbers also was affected by flooding, cancelling one camp session, but will be back on schedule as well next week.

Jordan ended his speaking time telling the entire Falls Creek summer staff, who were in attendance for the service, how much he appreciated their efforts.

“I want you to know I’ve watched you,” Jordan said to the summer staff. “I’ve had reports about you from the time we had students and sponsors here. Here’s what I’ve heard: ‘Best staff ever.’ I’ve heard that from those who were here who you’ve helped and provided for their safety, and cared for them. You’ve help them get moved out when the time came. I also heard from supervisors here. They just can’t say enough about the kind of hard work you’ve done. I just wanted you to know from me as a leader of Oklahoma Baptists, I appreciate you more than you will ever understand. 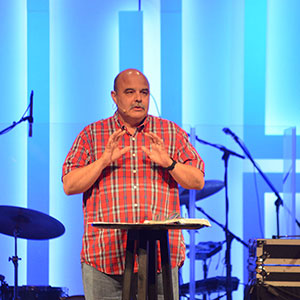 “The reason we do Falls Creek, you know, is because we want the Gospel presented, and we want young people to come to faith in Christ and lives transformed, and next Monday we get to start that all over again.”

Denver and Ced, worship band that was scheduled to provide music during the Week 4 services, performed during the livestream service. Andy Harrison, Falls Creek program director, provided the message from Matt. 11, talking about rest for the weary and how Jesus wants to comfort affliction.

“My prayer tonight is that, as you hear these words from Jesus, that He reveals Himself to you. That you wouldn’t be so proud in your heart… that He would open your heart, and you would say ‘Jesus, I’m willing to let you change my life,’” said Harrison.