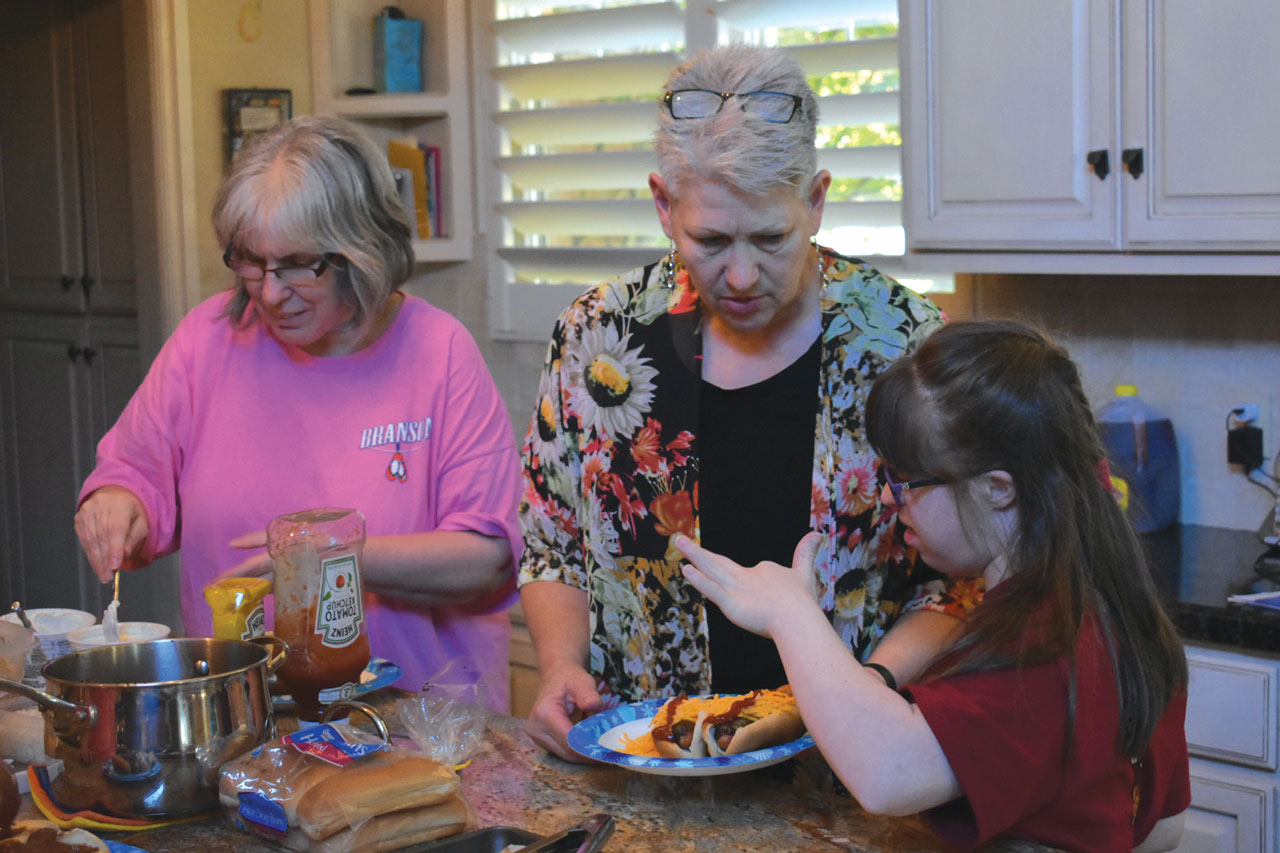 EDMOND—Laughter and pleasant aromas fill Karla Boone’s kitchen as she gathers with some of her favorite people to cook delicious meals together.

Boone along with her husband Steve, members at Edmond, Oakdale, have been involved in serving in several special needs programs such as Camp Perfect Wings, 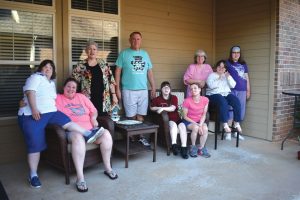 Karla and her husband Steve, center, spending time with members of her Girls Night Out gathering

among others, across the state, but she wanted to make a difference in someone’s life rather than having some fun for a couple of hours, which she still does and enjoys.

Boone then took action and came up with the idea to host a cooking class for those with special needs at her home in Edmond.

“Learning life skills is so important for people with disabilities. It helps them to become more independent,” Boone said.

In her six-week, weekly cooking class, Boone focuses on teaching how to create nutritious meals without needing help from others, among other life skills related to cooking.

“In our cooking class we learn about sanitation, healthy food choices, planning a menu. We make shopping lists and even go to the store to buy all the ingredients,” Boone said. “Then each girl works independently to prepare her own food, and most of all, they get to eat what they prepared!”

Boone explained that before the cooking class, some of her friends were not allowed to cook alone because it was too dangerous. They could burn themselves or catch fire to home. Not anymore, said Boone, “Now they are able to prepare a complete, nutritious meal all by themselves.”

During class, all of the cooking is done on George Foreman grills. Boone and those who attend her class make a photo recipe book without any words, only using pictures. Their photo recipe books show each student how to prepare each recipe, step-by-step. The recipes are also color coded, to make them easier to find.

Boone’s students are excelling in her cooking class, and their families are gladly reaping the benefits. One of the first students recently took the cooking skills she has learned and prepared her mom a Mother’s Day breakfast all by herself. Boone remarked, “Now that will empower a girl!”

Another student made dinner for her dad, and he said it was the best grilled cheese sandwich he has ever eaten. The student had a smile on her face for days. 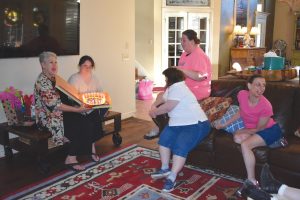 ‘Happy Birthday’ is sung as a birthday celebration takes place, one of the favorite activities of the class.

Another thing Boone does is “Girls Night Out” or GNO. Once a month, Boone and her friends gather together in her home to enjoy a night of fun. The schedule consists of greeting time, washing hands, help make food such as personal pizzas, eat dinner, make a craft or celebrate birthdays, then they watch a movie.

Boone selected these girls from different special needs organizations she has served. Some girls know each other, and some girls didn’t know anyone, but that has all changed.

“At first there was little interaction between the girls, they talked to me, but not to each other, they were all there individually,” said Boone. “Now, they are true girlfriends and love to call each other just that. They have a group to belong to.”

Boone said the girls interact with each other and talk constantly, laughing and helping each other cook and craft along the way. One of the favorite activities of the girls are birthday parties.

Boone noted how some of the girls had never had birthday parties outside of their immediate family, with no girlfriends to invite. That isn’t the case anymore. GNO has enabled the girls to have a group to which they belong, spend some time independently away from their parents and be accepted for who they are.

“My favorite thing about GNO is the personal interaction between the girls. We discuss what’s going on in their lives and we pray for our own needs and others and each month they tell how their specific prayers have been answered.”

When asked how she got involved with the many special needs programs in which she and Steve serve, Boone said, “If you want to get involved with one person or a group of people that have disabilities, stop over thinking it. Just do something, be flexible and say yes to God’s plan.”

Each week as Boone hosts her cooking class and monthly as the girls get together for a fun time of fellowship, the Lord is working in all of their hearts, all because Boone said yes to the Lord urging her to branch out, “Most people are one decision away from changing someone’s life, just say ‘Yes’ to God.”