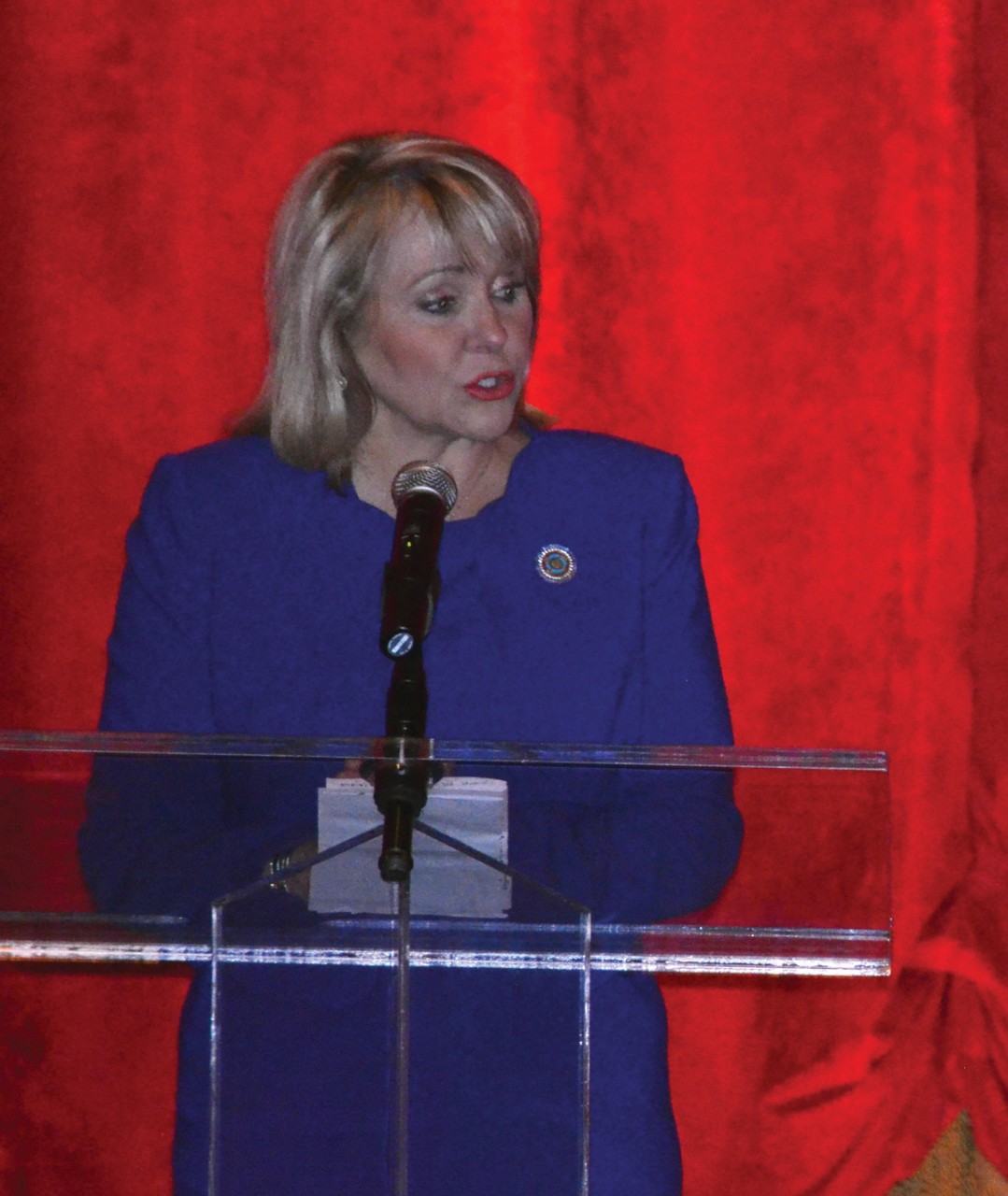 Gov. Mary Fallin speaks at the May 13 movie premiere event of ‘Where Was God?’ at the Moore Warren Theatre.

MOORE—On Tues., May 13, more than 500 Oklahomans attended the movie premiere screening of the Oklahoma documentary film “Where Was God?” at the Moore Warren Theatre.

The event, which was hosted by the Baptist General Convention of Oklahoma (BGCO) and its Disaster Relief organization, was attended by notable people including Gov. Mary Fallin, City of Moore Mayor Glenn Lewis, Moore Public School officials and select teachers, Insurance Commissioner John Doak, select families who lost loved ones in the tornado, first responders to the Moore tornado, among others.

“This film offers a real picture of hope and God’s provision after the terrible May 2013 tornadoes,” said Anthony L. Jordan, BGCO executive director-treasurer, who spoke at the event. “We are Oklahoma strong, not because of who we are, but because God gives us strength.”

Fallin expressed words of appreciation for the BGCO and its Disaster Relief volunteers for serving the Moore community, as well as other disasters.

“We are so grateful for the Baptist General Convention of Oklahoma for your leadership and generosity,” said Fallin.

“This question, ‘Where was God?’ is something all of us ask at some point in life,” she said. “I saw where God was after last May. I saw Him in the teachers who protected children from the storms. I saw Him in the first responders who risked their lives to help. 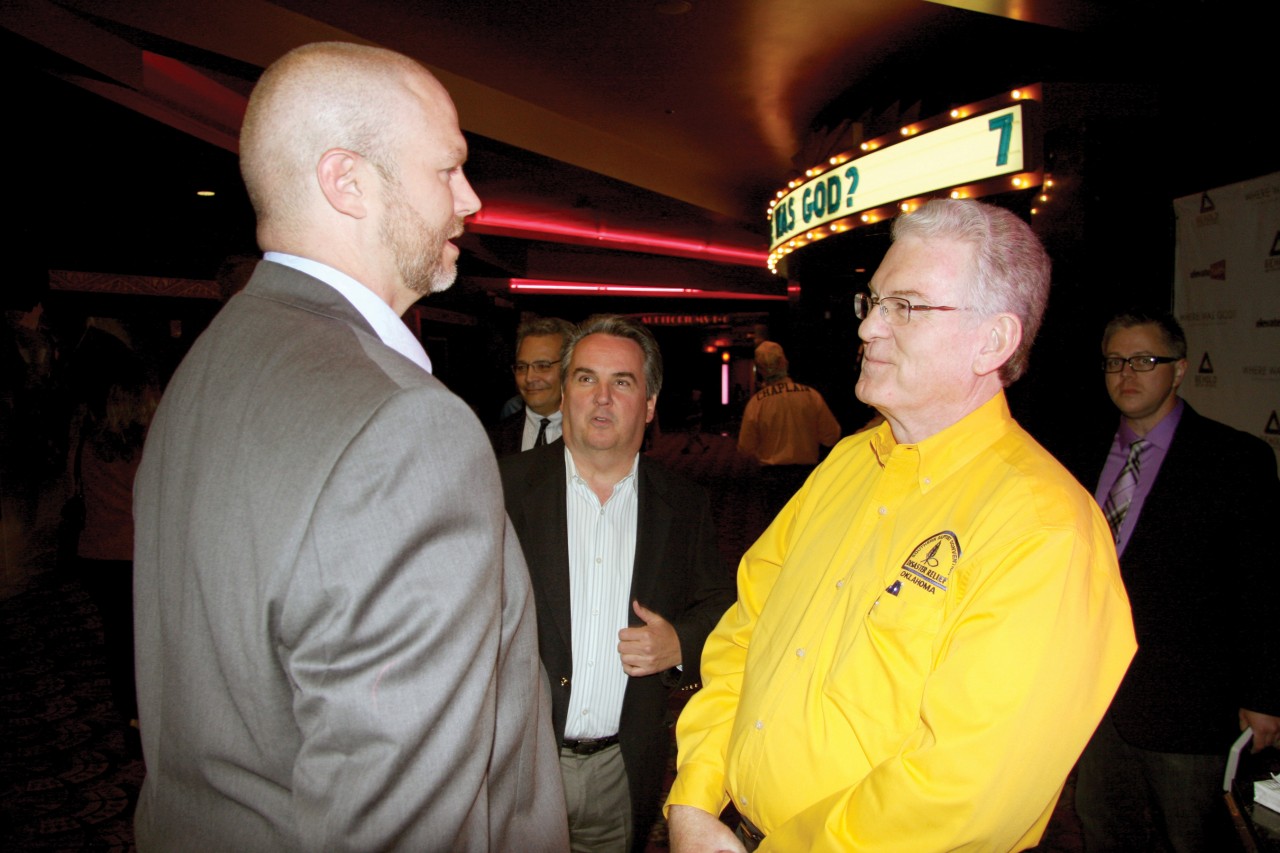 From left, James Moody, who was featured in ‘Where Was God?’ lost his home in the Moore tornado, visits with film producer Chris Forbes and BGCO Executive Director-Treasurer Anthony L. Jordan.

“No one could have imagined what this (Moore) community would be put through last May.

“But we will continue to help families who lost children and loved ones and keep them near to our hearts,” said Fallin.

“This movie is going to help us retrieve that hope and healing that all of us need at times like this. We know there are going to be storms in life—the Bible tells us that there will be valleys and mountain tops. That’s when we want to call upon our faith (in God).

The film explores the role of faith and hope in overcoming life’s storms and follows the stories of survivors, parents, children, first responders and volunteers who experienced the devastating tornadoes that hit Moore on May 20, 2013 and in Joplin, Mo. in 2011.

Filmmaker Chris Forbes said, “The film’s premiere event hosted by the BGCO and Oklahoma Baptist Disaster Relief was very gratifying. The enthusiasm with which the film was received was due to Oklahoma Baptists’ passion for evangelism.

“I admire the people in our film who openly shared their hurts and griefs on camera. Their willingness to offer their experiences as a means to help others find hope and healing is inspiring.”

According to Forbes, “Where Was God?” will run at the Warren through May 22, with the possibility of running longer. 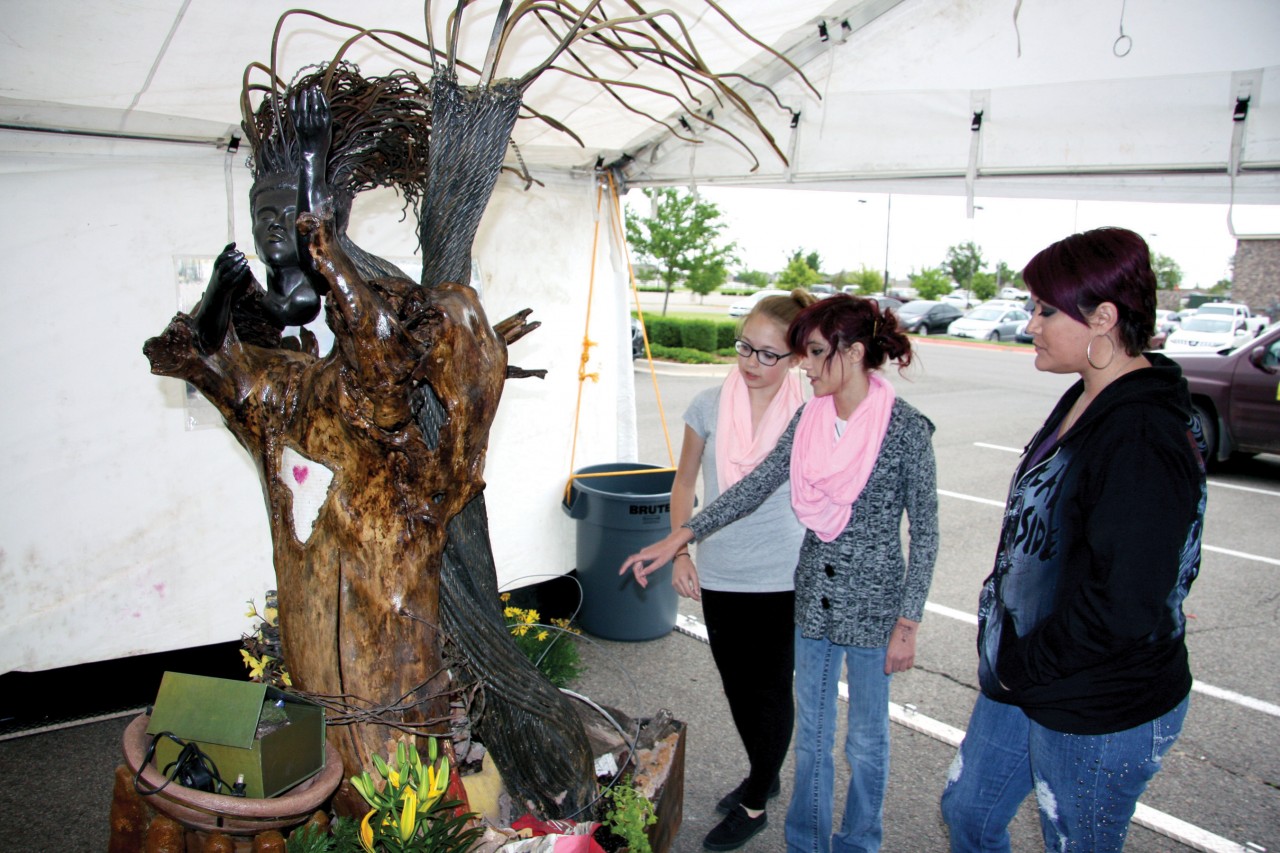 From right, Tara Fanning, Alexis Fanning and Hayden Gardiner, look at the “Rising from the Rubble” sculpture made by a local artist. The sculpture, which was featured in the film, was made from pieces of rubble after the storm and family photos from those affected by the tornado.

Viewers who attended the May 13 premiere praised the film.

“If I could use one word to describe it: powerful,” said Will Wilson, Jr., pastor of Tecumseh, New Hope.

Garland and others who saw the film attested to the gospel-sharing opportunity it creates.

“Our goal with this film is to showcase faith, hope and the ability to overcome after life’s storms—whether they be literal or figurative,” said Steven Earp, the film’s executive producer and lead pastor at Moore, Elevate.

“We want to remind people that God is always near, no matter what. There is not a single thing that we could ever go through that our heavenly Father does not understand, and there is not a single dark place that He has not already walked. We are so thankful to our cast for sharing their stories of courage, faith, change and hope to inspire others, and we hope that message resonates with those who see the film.”

The BGCO had chaplains at the premiere event and also displayed its disaster relief feeding trucks at the Warren, ones that were used in the May 20, 2013 tornado relief and other disasters. 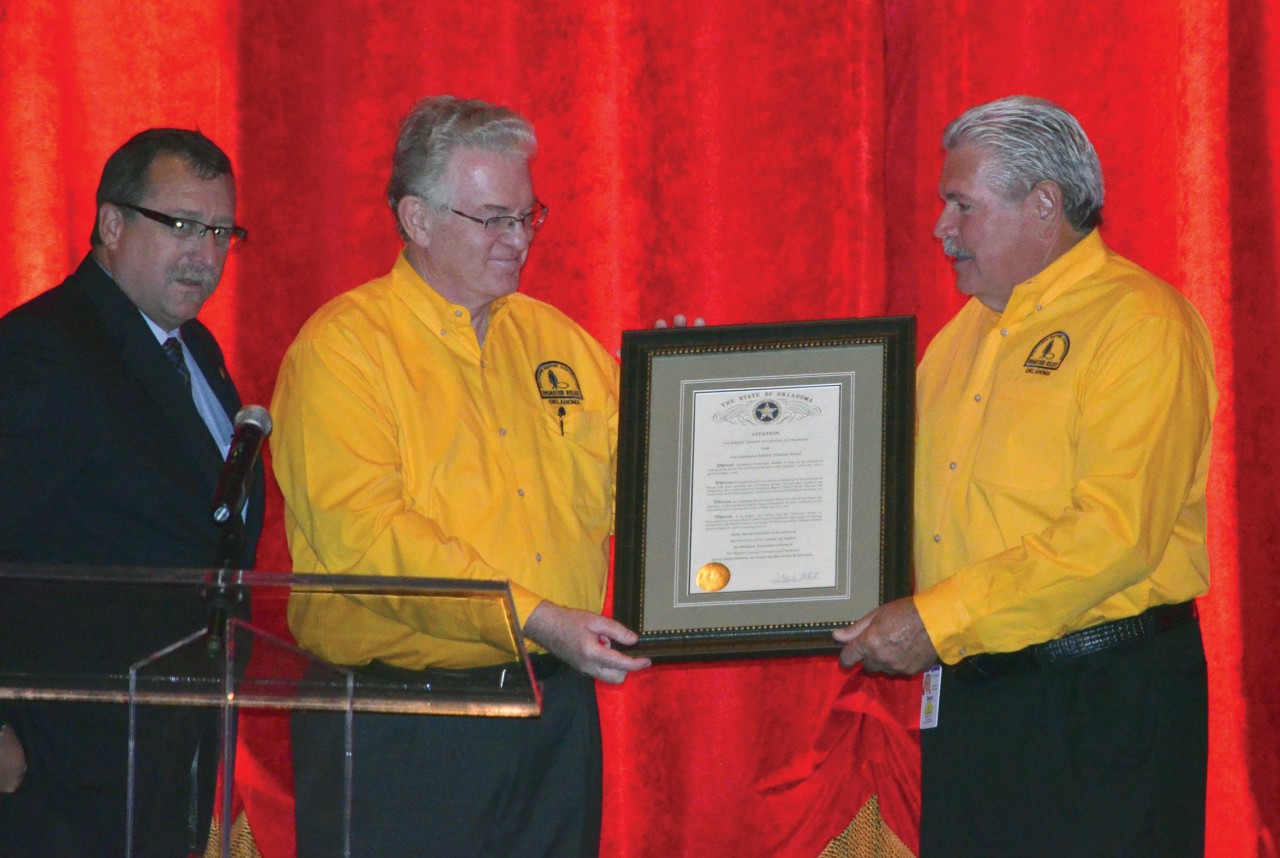 From left, Rep. Mark McBride, R-Moore, presents a citation from the Oklahoma State House of Representatives praising Oklahoma Baptist Disaster Relief for its role in the Moore tornado recovery.

Forbes and the movie makers expect the film to open in other areas of the state soon.

“The film can be brought to any city in the state by visiting our website WhereWasGod.com. We have a sponsor who also is ready to help bring the film to cities all over the state,” Forbes said.

Sam Porter, state director for Oklahoma Baptist Disaster Relief, makes an appearance in the movie. He is featured giving his perspective of what happened in the aftermath of the Moore tornado.

“It is a gripping story,” said Porter. “It is a movie that churches can recommend, take people to see. I believe (the movie) can lead people to the Lord.”

“Where Was God?” is a Behold Motion Pictures film in association with Elevate Faith Productions. The film was produced by Brian Cates and Forbes and directed by Travis Palmer. Funding for the film is provided by Moore, Elevate, faith-based groups, Oklahoma churches and companies.

For more information about the film and to view the trailer, visit www.wherewasgod.com.