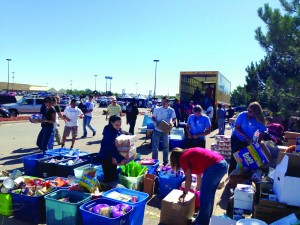 Everyday Church mobilizes its members to do various outreach projects, including after the Moore tornadoes.

MOORE—As the tornado plowed through Moore on May 20, John Hickman sat in Brandon, Miss. with his eyes glued to the TV.

Just a few months earlier, God had spoken to Hickman about planting a new church in his hometown. Now the area was being devastated by the massive storm.

“I was torn,” related Hickman. “I was in Mississippi, but my heart was in Oklahoma.”

Hickman and his family were in Brandon doing a church planting residency at Pinelake Church—an 11-month program to equip, encourage and send out church planters. A graduate of WestMoore High School, Oklahoma Baptist University and New Orleans Seminary, Hickman had served as youth pastor at Broken Arrow, First and the Church at BattleCreek, as well as in Richland, Miss. He also served five years in full-time evangelism.

“I sensed God leading me toward the pastorate, but with some wise counsel, I realized God was pointing me to church planting,” Hickman said. “I was clueless about church planting, but the residency program grew me and gave me a vision for Everyday Church.”

Hickman said they inwardly expected to move to a place with which they would be largely unfamiliar, but at a Catalyst Conference in Dallas, he heard a message he felt was completely directed to him.

“The speaker,” Hickman explained, “taught from Mark 5:19, where Jesus said to the man He healed from the legion of demons, ‘Go home to your friends and tell them how much the Lord has done for you, and how he has had mercy on you.’ It was one of those moments where God’s voice was undeniable.”

The timeline for the new church was for the Hickmans to relocate to Moore in June, serve the community through “Bless the City,” and launch a monthly preview service on Aug. 18. He said they had been talking with Briarwood Elementary School about meeting in their facilities, so the devastation at that school was even more personal to the Hickmans.

But on May 21, Hickman flew to Oklahoma and immediately began serving the Moore area. 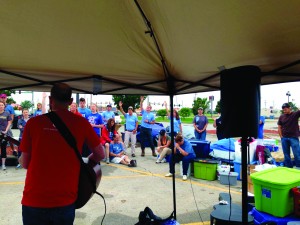 Everyday Church enjoys a special time of worship after an outreach event.

“God put us in front of the activity,” Hickman noted. “We set up in the Wal Mart parking lot and mobilized 300 people from 10 states, as well as a man from England. You might say we were birthed through the storm. We started worship services in the parking lot with about 60 people, and had five salvation decisions.”

On Aug. 18, as scheduled, the new church had its first meeting at Wayland Bonds Elementary School, with 81 people in attendance and three professions of faith.

In July, the fledgling church sponsored a sports camp, attended by more than 100 children. There were 40 salvations during that camp.

“Our goal is to reach the city to reach the world one day at a time,” Hickman said. “We want to see people find true community and live their lives together every day for Jesus Christ by encouraging, studying and serving together in a consistent manner, thus our name—Everyday Church.

“Everyday living is where spiritual development is worked out. Loving God and loving our neighbors require us to move into action. Church activity is not always an accurate portrayal of genuine spiritual vitality. God has placed His followers in various sectors of society to be the Gospel in a living example.”

Every new church seems to have to justify its reason for existence, because most people think there are already enough churches. But statistics continue to show the most effective way to reach the unchurched is through new church plants.

North America is the only continent in which Christianity is not growing with 3,500 churches in America closing their doors every year. The U.S. is the third largest unchurched nation with 195 million Americans not attending church.

There are 343,201 unchurched people in Oklahoma and Cleveland Counties, and in Cleveland County, only 43 percent of the population claims a church home.

The new church, whose financial help comes from the Baptist General Convention of Oklahoma (BGCO), North American Mission Board, Union Association, sponsoring Pinelake Church and faithful people, has the goal of being completely self-sustaining by year four.

Hickman and his wife, Kim, who is from Alabama, have been married seven years and have two children, Isaac, 4, and Isabel, who was born on 10-10-10.

Everyday Church meets once a month, and will officially launch on Jan. 12, 2014. The launch team continues to meet bi-monthly. More information about the church may be obtained at its website — www.every
dayokc.com.