Gospel on the go: Summer evangelism team shares the ‘Good News’ throughout Oklahoma

The Highway and Lanes Summer Evangelism Project is spreading the Gospel across Oklahoma through the work of the Lord using three college students. 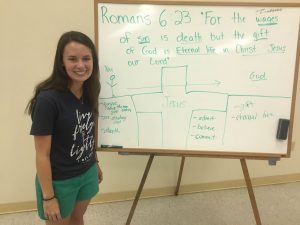 Reed stands in front of illustrations she uses in teaching children Bible verses; 4) Griffin interacts with children at one of the churches the evangelism team visited

while reaching Oklahomans with the Gospel of Jesus Christ.

Based on Luke 14:23 that says “Then the master told the slave, ‘Go out into the highway and the lands and make them come in, so that my house may be filled,’” the goal of the teams is to serve throughout the summer in eight churches across the state beginning on Wednesdays and ending on Sundays. They began May 31 and will work through Aug. 6.

Tooley, Reed and Griffin have completed half of their destinations thus far and are picking up steam as they grow in their abilities of personal evangelism.

“They had never gone door-to-door visiting before. Which is what Dr. (Anthony) Jordan (BGCO executive director-treasurer), the leadership and myself wanted, for personal evangelism to happen. It was way out of their comfort zone, and we really stretched them,” said Mike Napier, BGCO personal evangelism specialist.

“The team is learning a boldness they did not have at the beginning. It is fun to watch them grow and to see and hear the results of them being stretched by the power and leading of the Holy Spirit,” Napier said following the third week of the team’s service.

Once the team arrives in a community, they attend Wednesday evening church and get acquainted with the congregation. Here, the team promotes the purpose of the activities 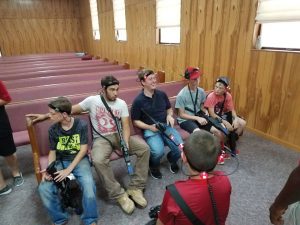 Teens gear up for Red Dot Laser Tag with Griffin.

in the coming days.

Thursday through Saturday, the team goes door-to-door in the town, sharing the Gospel. On Thursday evening, there are children’s activities, and Friday evening, the team orchestrates youth activities. Saturday evening and Sunday morning, worship and preaching take place.

While the team visited Davis, First, the first church they visited, five professions of faith were made. Here, according to Napier, “They learned a lot about grace, mercy, prayer and spiritual healing.”

Next, the Highway and Lanes team visited Red Oak, Bethel. They learned much under the example of Pastor Bob Cherry. “He taught them a lot just by being with them as they went door-to-door,” said Napier.

The team trained church members how to use the “Evange-cube,” a discipleship tool that helps  share the Gospel with images. Three professions of faith were made from door-to-door visits in Red Oak.

The third week, Tooley, Reed and Griffin worked at Boswell, First. There, Tooley was discipled by the lead pastor. Tooley has taken on the role withthe team as the preacher, or “youth guy.”

Napier remarked on Tooley’s growth saying, “Cody had only preached two times before this summer. Now he is preaching on Wednesday nights, or leading at least an adult Bible study, Saturday nights, for sure on Sunday mornings, and a couple of churches asked him to stay and preach that Sunday night as well.”

Boswell, First arranged a “Horse Whisperer” to come on Saturday night, and around 300 people attended the event. There, many responded to the Gospel.

There was also a children’s event, where Reed took the lead. This was the week Napier noticed, “Erica is getting bolder in her ministry,” and there were six known salvations. 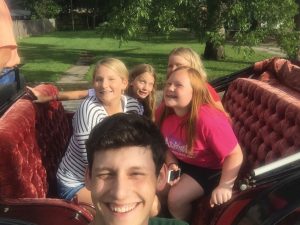 Tooley smiles with a group of children in a light-hearted moment, preparing to go for a ride in a horse-drawn carriage at the horse whispering event in Boswell.

Napier remarked at the end of this week that the entire team is doing incredible work for the Lord.

“Erica has been stretched because every Thursday night she’s sharing the Gospel with a group of children, leading them in activities and games, and then it comes down to Gospel presentation. And that’s all on her. She’s also equipping adults on how to work with children,” Napier explained.

Griffin has been leading worship at each church. “For Graeson it’s just picking him up and placing him in different churches with different music personalities. He’s doing everything from working with praise teams, to working with instrumentalists, no matter the instrument. He is doing a lot of background work within that aspect,” Napier said.

The success the Highway and Lanes Summer Evangelism Project has seen in its first year can be directly accredited to the Lord. The idea of the project came when Jordan mentioned how he would like to send door-to-door evangelists out for the summer. Once the team finishes their work for the summer, there will be a time of celebration for what God has done through each of the team members.

Napier expressed future plans for the Highway and Lanes Summer Evangelism Project saying, “Our goal is to do one or more teams from OBU but also through Baptist Collegiate Ministries (BCM) that would like to send a team of three or a couple of teams of three out into Oklahoma for the summer.”

Those interested in serving on the evangelism project team in forthcoming summers are encouraged to contact their BCM directors and get involved in ministry. Napier also encouraged those interested to “Fine-tune others to commit to serve with you.” Requirements include participants make a profession of faith, have a Bible, have a prayer team supporting you in prayer and be willing to go and support wherever the Lord calls.

Napier expressed the importance of the project saying,“This is such an amazing opportunity because the more you preach and share the Gospel, the more the spiritual gifts within you are honed by the Holy Spirit. It’s amazing.”