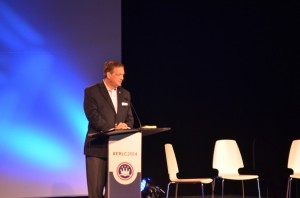 Al Mohler kicked off the ERLC National Conference speaking on “Aftermath: Ministering in a Post-Marriage Culture”

The ERLC chose to have the conference at the Opryland Hotel and Conference Center, known as the “largest combined hotel and convention center under one roof in the world,” because of the great interest and importance of the conference topic. Phillip Bethancourt, ERLC executive vice president, told Baptist Press that there was a “surge in interest” in this year’s conference and the ERLC is “pleasantly surprised by the great turnout.”

Mohler says Church needs to be active and humble

Al Mohler, president of Southern Seminary opened the conference speaking on “Aftermath: Ministering in a Post-Marriage Culture,” which also is the name of a book by Mohler soon be released.

Mohler began his talk with summarizing how the post-marriage culture began. He said it involved a three-point process: 1) What is celebrated is condemned. He referred to the process of divorce affecting the state of marriage. 2) What is condemned is celebrated. He pointed out the acceptance of same-sex marriage. 3) Those who refuse to celebrate are now condemned.

Mohler noted the multiple instances where Christians have been under attack for not approving same-sex marriage in social settings.

Mohler spoke on Romans 1 as a basis of the church believing that homosexuality is a sin and has believed “for two millennia.” He also made it a point that the passage does not single out homosexuals, saying, “it’s about all sin. We want to get this right because the Gospel is at stake.”

Knowing that the evangelical church is under attack for its stance on homosexuality and same-sex marriage, Mohler said it has to prepare itself for a new era of moral view. 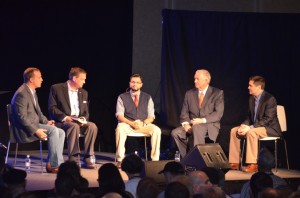 Two panels were featured in the first session, including a panel that addressed “The State of Marriage in American Culture: Divorce, Cohabitation, Same-Sex Marriage and other trends.” Along with Mohler, the panel included D.A. Horton, executive director of Reach Life Ministries; Robert Sloan, president of Houston Baptist University and Russell Moore, ERLC president.

• a civil rights perspective of homosexuality

• the Houston pastors who were subpoenaed for their sermons

• the “third way” perspective for churches

Moore made an analogy of the recent court rulings requiring states to approve same-sex marriages.

“This is not the Roe versus Wade of marriage. It is Griswold versus Connecticut,” he stressed.

He said the 1965 landmark case that allowed the “right to marital privacy” was the precedent to Roe v. Wade, and such is the comparison of what can be made of what the same-sex rulings are doing to today’s culture.

Horton addressed the question “Is gay is the new black?” referring to homosexuals experiencing a similar civil rights movement as African-Americans.

“No it is not,” said Horton. “The core matter of each movement is one basically trying to reestablish human dignity and another redefining marriage. Blacks were treated as cattle. There is no Jim Crow movement (with homosexuals). You don’t see ‘gay only’ water fountains.”

Moore also commented on the civil rights issue saying, “There are some human dignity matters involved (in both matters). (Homosexuals) are treated with indignity. Gays and lesbians are hounded and tracked down. Even as we disagree (with the homosexual movement), that is sinful and wrong.”

The ERLC president emphasized the importance of churches being involved in helping homosexuals according to biblical principles.

“They should not be rejected and left out on the streets,” Moore said.

“I don’t think there is a ‘third way.’ We either recognize (homosexuality) or we don’t. There is no ‘third way,’ and it will not last.”

The panel emphasized churches and experienced married couples should take on mentoring young adults who are challenged with the culture neglecting or having a low perspective of marriage.

“Now we don’t preach what we practice,” Mohler said.

“How do we help them believe in marriage? By example,” said Sloan. “If we don’t model and talk about marriage, we have harmed the family long before the same-sex revolution.” 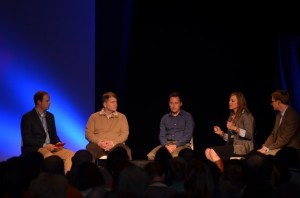 The second panel dealt with “Millennials and Marriage,” featuring John Stonestreet of the Chuck Colson Center for Christian Worldview; Linsday Swartz of the ERLC; Eric Teetsel, director of Manhattan Declaration; and Trevin Wax managing editor of The Gospel Project.

Teetsel said millennials struggle with marriage because they are led to believe “romantic love is the only love there is.”

“I don’t know to be frustrated with the fathers or with the sons,” he said. “They (sons) have not been trained up. They fear commitment. (Men today) lack those basic instincts.”

She continued saying it involves both the church and the family “because if the church and family aren’t speaking, the world will speak in their place.”

Wax elaborated on the church’s involvement with single adults today.

“We now live in a culture where more people are single than are not single,” he said. “The church has been slow to wrestle with that reality because that is not what we were prepared for. If the culture reveals that single is the norm not the exception, what will it take to bring them into the congregation? Ministry can’t be ministering to singles but alongside singles. There needs to be a better integration.”

The ERLC Conference continues Tues., Oct. 28 with a morning session that opens with Moore and Rosaria Butterfield, author of the book The Secret Thoughts of an Unlikely Convert, which tells of Butterfield’s conversion from a lesbian lifestyle to living for Christ.