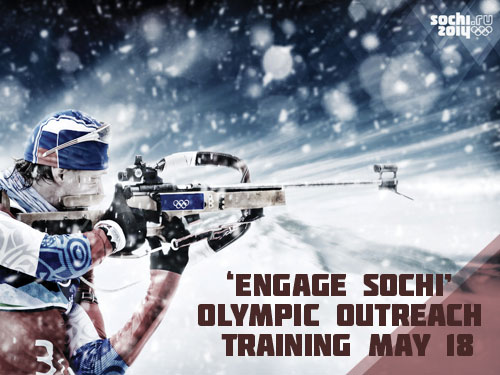 SHAWNEE—As the world’s eyes turn to Sochi, Russia, for the 2014 Winter Olympic Games, Southern Baptists prepare to turn hearts and minds toward a relationship with Jesus Christ. Oklahoma Baptist University (OBU) alum Marc Hooks hopes to engage his fellow Bison in the endeavor through “Engage Sochi,” an evangelism and church planting project of the International Mission Board.

Hooks, a 1990 OBU graduate, and his wife, Kellye, a 1989 alum, are leading efforts for Engage Sochi in the Olympic host city of Sochi, Russia.

“Our vision is to make a difference for Christ before, during and after the 2014 Winter Olympic Games,” Hooks said. “Our mission is ministry and follow-up that supports and leads to church planting in the Sochi area and beyond.”

To prepare for the Engage Sochi project, Hooks will lead a free training at OBU from 9 a.m.-4 p.m., Sat., May 18, in the upper Geiger Center. Registration is available online through the OBU website (www.okbu.edu), and the deadline to register is May 15. Anyone with an interest in the Engage Sochi project can attend. Hooks particularly encourages Engage Sochi team leaders and participants who are within driving distance of the OBU campus to attend.

“For decades the OBU community has been involved with missions opportunities around the world,” Hooks said. “And OBU continues to send more missionaries through the IMB than any other Southern Baptist college. OBU students, teachers and alumni are invited to participate in this unique IMB project.”

The Singing Churchmen of Oklahoma and members of the Baptist General Convention of Oklahoma have committed to participate and will send more than 100 Oklahomans to the Olympic city, Hooks said.

Engage Sochi is an innovative initiative because it seeks to mobilize Southern Baptists to reach the people of Sochi through mass evangelism and church planting, not only during the 2014 Winter Olympic Games, but also before the games have commenced, as well as after the games have concluded and the masses of tourists and other visitors have left the city.

“Our goal is to share the Gospel primarily with the people who live and work in Sochi and then connect those people with our missionaries and others involved in local church plants,” Hooks said.

The missions endeavor correlates closely with OBU’s own mission statement, which states OBU will transform lives by equipping students to pursue academic excellence, integrate faith with all areas of knowledge, engage a diverse world and live worthy of the high calling of God in Christ.

“We know that volunteers will meet and share with people from all over the world,” Hooks said. “Our goal is to connect people, regardless of where they are from, with IMB church planters in their areas. We don’t want these to be one-time conversations. Having the opportunity to follow-up with people is very important.”

Engage Sochi volunteers will use traditional Olympic ministry methods of trading “evangelism pins” and using the arts to engage people throughout the city and in Olympic venues. However, their primary task will not be to see how many pins they can distribute in a day, but to spend time talking with people and forming relationships. In addition, native Russian-speaking volunteers from across Eastern Europe and the United States will be spending time in Sochi neighborhoods in an effort to connect with people and share the Gospel outside of traditional Olympic areas and venues.

But the Engage Sochi initiative also has a stateside component. As churches are sending volunteers to Sochi, they are being asked to engage their community as well. Each Engage Sochi partner church will receive a set of sermon outlines, adult and children’s small group lessons, and ideas on how they can create Olympic-themed outreach events in their own churches.

Engage Sochi leaders hope that churches will join them as prayer partners, realizing that not every church can send a team to Sochi.

“Prayer support is very important to us,” Hooks said. “We realize that those churches who pray for us are on the front-line of Olympic ministry. None of this would be possible without prayer. So regardless of whether a church sends volunteers to Sochi or not, we want them to both pray for the efforts in Russia and for them to be part of ‘Engage Your Community.’”

Over the next year, the Engage Sochi team will release a virtual prayer walk for each of the three major Olympic areas in Sochi. They will also be publishing a prayer guide to help those in the States to know how to pray for the teams in Sochi.

For more information about Engage Sochi, how to become a partner, or how to send volunteer teams to be part of the mass evangelism and church planting efforts in Sochi, go to www.EngageSochi.org or write to TellMeMore@EngageSochi.org.

To register for the May 18 training at OBU, visit www.okbu.edu/engagesochi.html.