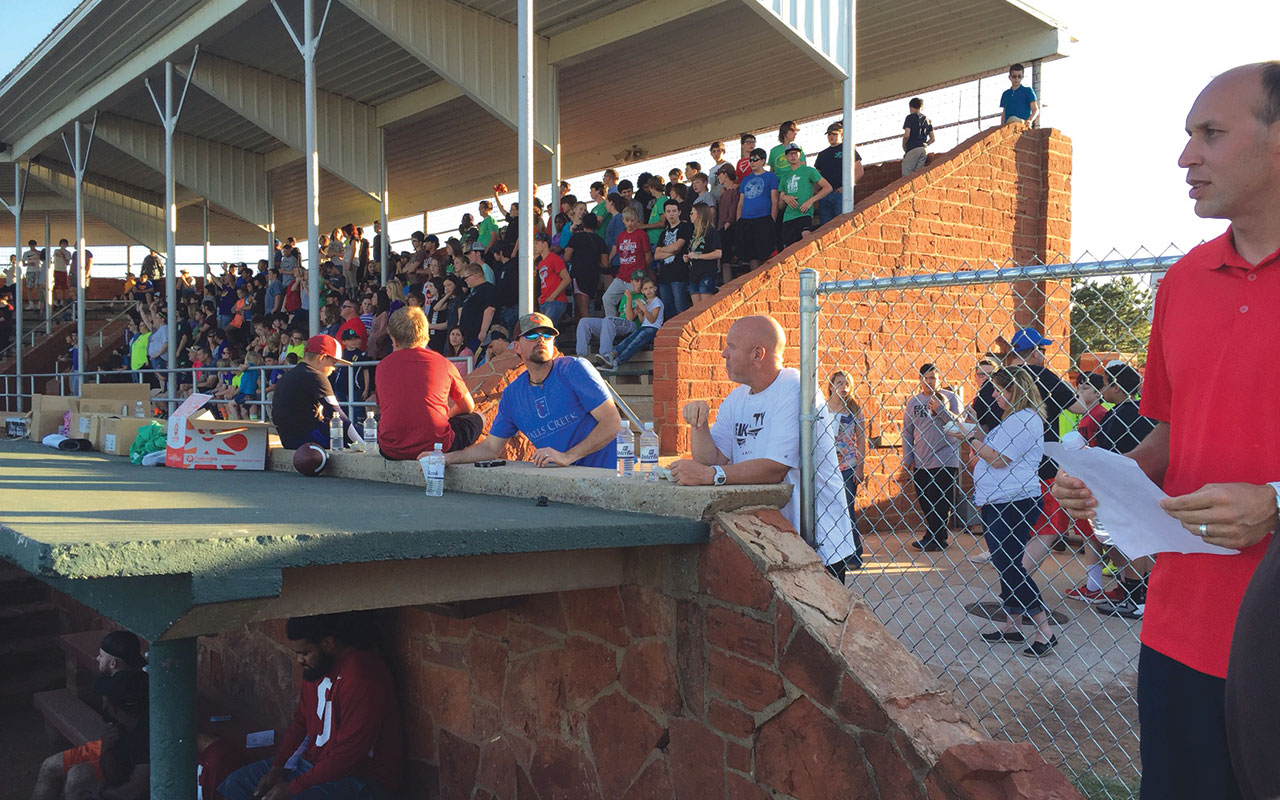 ELK CITY—University of Oklahoma (OU) football players Samaje Perine and Nila Kasitati and Oklahoma State University (OSU) football player Keegan Metcalf highlighted Fields of Faith on May 4, as the event experienced six students making professions of faith and 12 rededicating their lives to Christ. Leaders from Elk City churches and churches from surrounding communities teamed up with Fellowship of Christian Athletes (FCA) to put on Fields of Faith, which drew more than 600 in attendance at Ackley Park.

Danny Ringer, director of missions in Beckham Mills Association, raved about the event, especially because of the spiritual decisions that resulted, but also due to the team effort of the many church and FCA leaders that helped make it happen.

“This was drawing our churches together to work together,” said Ringer. “We, as Southern Baptists, want to reach young people for Christ. All the work and effort that went into it was for the sole purpose to give God the glory and to see people come to Christ and strengthen their relationship in Christ. One of the ways we can do that is by partnering with an organization like Fellowship of Christian Athletes that allows us to share Christ in the schools. (Through FCA) the students lead out in all of our schools.”

Ringer said all of the FCA presidents at the high schools and junior high schools participated in the Fields of Faith program, including welcoming, praying and Scripture reading. The Elk City FCA presidents are Bailey Bruner, Reagan Benton, Kasen Moran, Logan Whaley, and Bailey Sterling. All of these FCA leaders are members of Elk City, First, except Whaley, who is a member at Sayre, First.

Ringer said the OU and OSU football players gave powerful testimonies of how they came to Christ and sharing challenges they have faced. He especially was impressed with Kasitati who talked about his childhood in American Samoa, how he came to OU and how God has worked in his life the past couple of years through FCA and being active in church.

“He shared like an evangelist,” Ringer said about Kasitati. “He was great. It was one of the best Gospel presentations I have ever heard. He was powerful.”

Metcalf was the first speaker to agree to speak at Fields of Faith. An Elk City native, Metcalf shared about transferring to OSU and attempting to walk on with the Cowboys. He talked about how God worked through this period of his life, as he did not know for sure he made the team. Metcalf just completed his second year on the squad and was a contributor on the special teams.

Perine was willing to speak at the Elk City event, but Ringer said the All-American running back admitted he never heard of Elk City when he was originally asked to speak and did not know how far a drive it was from Norman to the Western Oklahoma area.

Along with the many churches participating in the event, the Disaster Relief unit in Beckham Mills Association provided free hot dogs for all the attendees.

Ringer said plans are already in place for next year’s Fields of Faith, as Corey Nelson of the Denver Broncos is expected to be a featured speaker.