Dream of a youth group comes to fruition in Faxon 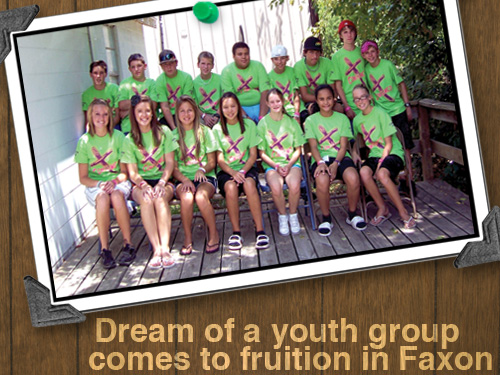 Kings aren’t the only people who have dreams, a.k.a. Martin Luther and Nebuchadnezzar in the second  chapter of Daniel.

In fact, Faxon has a whole dream team composed of members of First Church and their pastor Floyd Allen Jr.

“Every year we make a dream sheet,” said Allen. “We pick out three items we feel God wants us to do during the year, and those become our dreams.”

However, work was cut out for them this year. One of their dreams was to take students to Falls Creek. The only problem(s) was the church had no students, no youth director or no one working with youth.

“We’re mainly a congregation of senior adults, but God put on our hearts to take kids to Falls Creek this year,” Allen reiterated. “So, we secured a cabin and continued to pray.”

Within a few weeks, the church had not only a cabin, but also senior adults who agreed to be cooks and sponsors. But one problem still existed; there were no youth.

When June rolled around, and the youth weeks of Falls Creek began, there were still no youth at Faxon, First.

Then things started happening. One youth came to the church and asked if they were going to Falls Creek. He said he wanted to go. The word began to get out.

“One kid walked on our campus, and we engaged him in conversation,” recalled Allen. “We asked him what he was doing this summer, and if he wanted to go to Falls Creek. He said he didn’t know what Falls Creek was, but we ended up taking him and his brother.

By the time the church went to Falls Creek in July, 16 kids and five sponsors had been rounded up. Students in the group even had their own T-shirts designed by Christal Patton, one of the students who signed up for the week at camp.

“During the preaching each night, I found a room somewhere that was empty, and I prayed,” said Allen. “Every time I did this, we had decisions.”

Faxon had two students saved, two surrender to full-time ministry and three rededications during the week.

“For our little cabin, it was an awesome week,” said Allen. “Out of what happened at Falls Creek, we have hired a youth director and are developing a youth group.”

Allen said the church hasn’t kept all the students who went to Falls Creek, but with the addition of a youth minister to the staff, they hope to use that as a spark to grow.

Allen said he had been looking for a youth director for some time after Falls Creek, and as he was praying about it, God said to him, “You already have one.”

“I wasn’t sure what that meant, but I was led to a young lady, whose parents are members of our church, and she had recently started coming again,” Allen related. “When I asked her about being our youth minister, she said she would pray about it, which I thought was a good sign.”

Marie Campbell was pregnant at the time, but after her baby daughter was born, she agreed to accept the job.

Since that time, the youth have had their first social event, and are planning a judgment house and a Christmas program.

“We’re a small church running about 30-40 in worship services, but just last Sunday night, instead of the 15 we usually have, attendance was 28,” said Allen. “Faxon is a little farm town of about 140 families, but our calling card says ‘You are invited to come and connect with the largest and fastest growing church in Faxon.’ And we are, although we are the only church in Faxon.

“You start out with a dream, and sit there and watch what God does, and you just have to say ‘Thank You, God, for what You are doing.’”