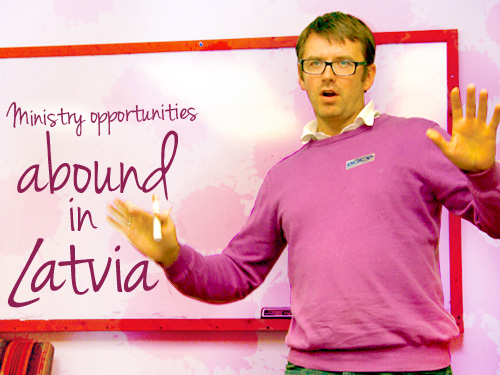 Peteris Sprogis was elected Bishop (President) of the Union of Baptist Churches in Latvia in 2006. He soon became keenly aware of the issues facing his denomination and society.

“It would have been easy for the Baptists to continue living our comfortable denominational life,” he said.  “However, it did not take a prophet to see that, if we continued in the same manner, we did not have any future. What was needed was a daring recognition of problems and a vision worth for me and others to live and die for. None of us would be ready to live and die for maintenance of a denominational system. We all want to live for something that is worth dying for.”

Sprogis had hopes of enticing the BGCO into forming a partnership with Latvian Baptists, but understood when Porter and Jordan explained that the Convention’s partnership glass was filled to the brim with agreements already in place with East Asia and Mexico and a newly-approved three-year partnership with Colorado set to begin in January.

Johnston-Marshall Association, meanwhile, is becoming involved in Latvia, which is located on the Baltic Sea, and is bordered to the north by Estonia, to the south by Lithuania, to the east by the Russian Federation and to the southeast by Belarus. Across the Baltic Sea to the west lies Sweden.

Madill, Cross Roads has had a ministry to Talsi Christian School in Latvia for seven years.

Latvia is divided into 118 municipalities, with 109 counties and nine cities. The capital and largest city is Riga. With a population of 2.22 million, Latvia is one of the least-populous members of the European Union.

When Sprogis assumed his role as head of the Baptist Union, he said, “The role and influence of churches in society was declining. Many churches continued to hold onto a mentality of holy, fortified fortresses which had helped them to survive the Soviet times. Their gates were locked, and they had essentially turned into prisons. The Church seemed to live in a denial of the reality of its problems as well as those of our society. There were about 6,000 Baptists in Latvia with its total population exceeding 2 million: what is the point of our history, traditions and values if more and more people are not reached for Christ and discipled as His followers?

“The initiatives of the Union were not effectively encouraging our people towards the Gospel-centered life and ministry and church as a community living out the Gospel. Many young leaders chose to work for a parachurch organization or went into business instead of church ministry. Church was not seen as a place to fulfill one’s calling and use their gifts.

“The Baptist Theological Seminary in Latvia, established in 1922 and reestablished in 1991, had provided theological training for some of the Union’s pastors. When it was unable to attract students—potential church leaders—its leaders made a decision in 2006 to move towards becoming an accredited Christian college with general admission programs.

“It seemed to be God’s timing for change which would help our denomination, each church and each believer to be mobilized to follow Jesus in a renewed way. The first steps I proposed were strengthening and renewal of existing churches, training of new ministry leaders and launching of church planting. The people in our churches welcomed the new initiatives for they had grown weary of living in denial.”

To offset the dearth of leadership training, Baltic Pastoral Institute (BPI) was established by the Union in 2008.

“It became a positive response to the situation with its mission to train, mentor and resource carefully selected men to share the Gospel, establish and lead high impact missional churches in strategic locations in Latvia, throughout the Baltic region and beyond,” Sprogis said. “The development of BPI is intrinsic to the Union’s goal to plant 100 new and healthy churches in the next 10 years. At the same time, we are eager to serve the believers of other Christian denominations in Latvia and beyond its borders.

“Our strategy at BPI is to create a balanced environment that simultaneously emphasizes four key result areas: Content, Competence, Character and Culture. We want to provide a holistic and balanced approach to human development and education. The first three result areas are not unique to BPI, and they are often used as a foundation for models of Christian education. We have added Culture as the fourth key result area to emphasize the need for cultural awareness and engagement which often is missing in ministry in Latvia and the Western world in general. These four areas and their specific outcomes are used to assess each course, activity and aspect of BPI’s everyday life as well as the entire program on regular basis.”

Dennis has been involved with numerous fund raisers over the last seven years on behalf of Talsi Christian School. Madill, Cross Roads hosted a prayer and mission gathering Aug. 28 which attracted 194 participants from 34 different churches, with 17 pastors present. Included were representatives from 10 churches in the Johnston-Marshall Association and others from Checotah, Durant, Ardmore, Ada, Edmond and Northern and Eastern Texas.

The evening started with updates on the Talsi School and the progress it has made in the last 15 years, followed by information about the non-profit 4:13 Ministries that handle the funds collected on behalf of the school. A report followed on the various summer camps and how many children are being touched by these programs.

Dempsey spoke about having met with leaders from the Baltic Pastoral Institute while in Latvia in July.

“I helped conduct a summer camp for orphans this summer and saw firsthand the ministry being done through the school, and I was blown away.  Talsi Christian School is leading the way in Christian ministry in their community,” Dempsey said. “The summers are full of different types of evangelistic camps being conducted on the school property. The churches are reaping the benefit of the school’s evangelistic outreach and the training of godly young people.

“On a broader scale, I hope that we as an association and other churches in Oklahoma can expand the type of things that are being done in Talsi. I don’t think Talsi school can add much more to its schedule, but since meeting the leaders of the Baltic Pastoral Institute, I believe we can expand the work going on in Latvia by partnering with church planters and existing churches to help them become more evangelistic.

“We plan to take another group to conduct the orphan camp again June 2012. We are also laying ground work for future work in partnership with the Baptist Union of Latvia and the Baltic Pastoral Institute.”

Another report outlined specific mission projects conducted in Latvia this year. Dennis described how God sent him in many directions this summer as one project turned into three. Child’s Play Inc. of Dallas donated playground equipment to the school to be shipped in a crate last Spring. The equipment only took up half of the container. The school’s founder and administrator, Inguna Gruznina, had for many years expressed interest in having a TKS bell choir, so Dennis attempted to purchase a full set of bells and soon discovered they were very expensive.

A member of Cross Roads offered to buy one. He enlisted the support of 40 church groups and/or individuals, who donated money for a three octave set of hand bells with accessories from Malmark Bell Co. These bells were added to the shipping crate along with school supplies, office supplies, sports equipment, craft supplies and various other items to be used for the school.

This endeavor led to a massive donation of 30 pallets of craft supplies from Hobby Lobby which would have exceeded space remaining in the crate. Specific items were selected to go in the container; the remainder was distributed to more than 25 churches, businesses or schools in southern Oklahoma who helped with TKS over the years.

More information about the Latvian Baptist Union is available at www.lbds.lv; and on the Baltic Pastoral Institute at www.bpiriga.lv (Click on the English translation tab at the top right of the page). Churches and associations interested in ministry in Latvia may contact Dempsey at 580/795-5584; www.jmba.org or Dennis at 580/564-0382; ericdennis2@yahoo.com.