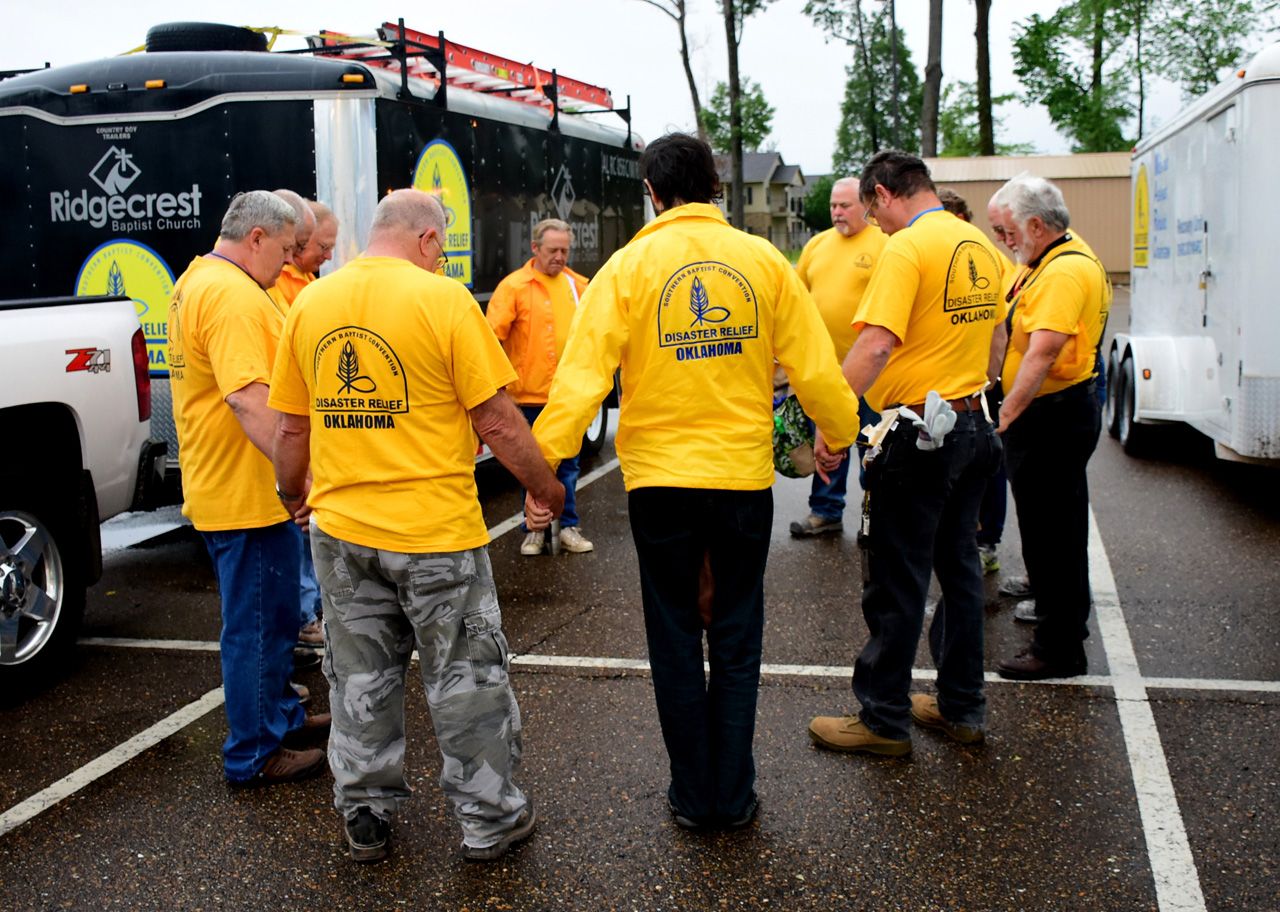 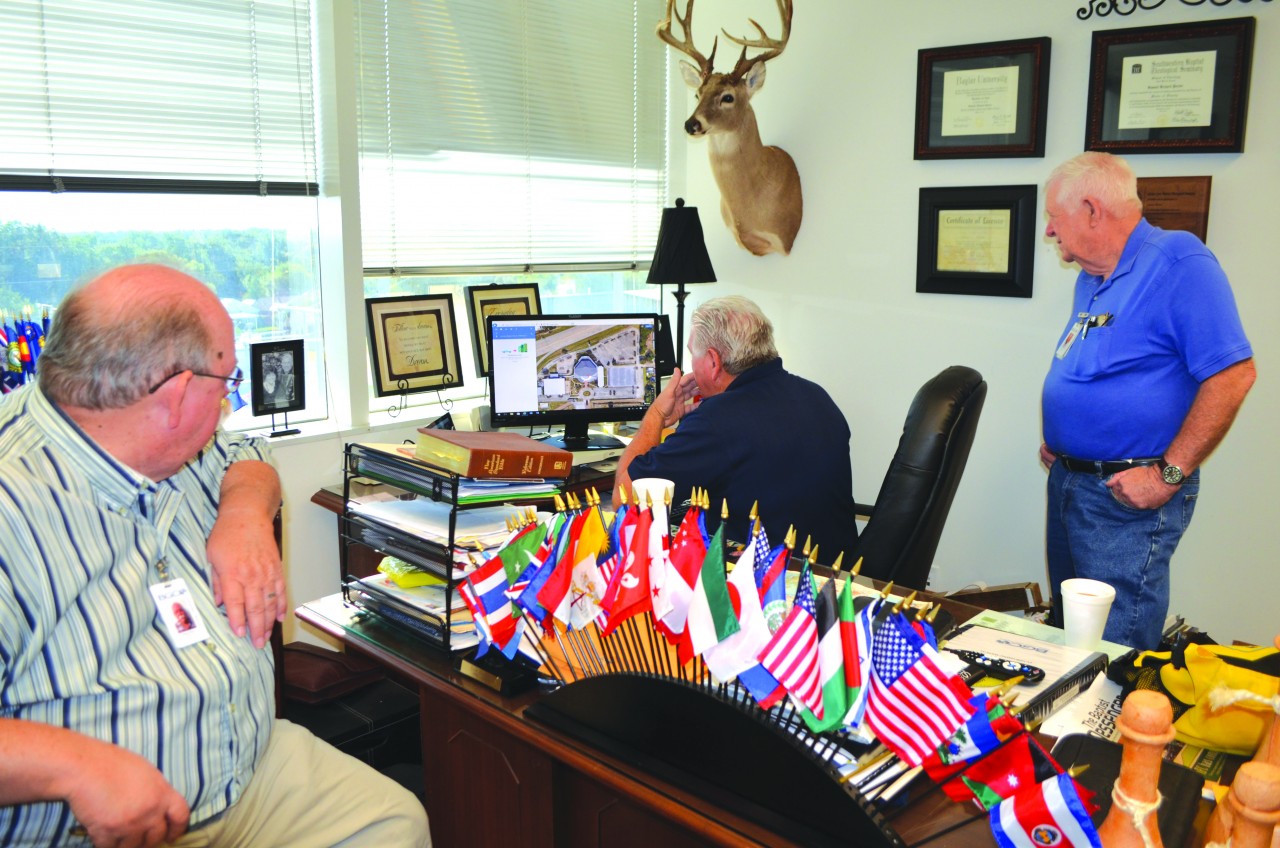 Dean Kiser, left, and Dave Karr, right, looks on as Sam Porter examines an aerial view of the church site where the BGCO DR volunteers will be stationed in Baton Rouge.

Baptist General Convention of Oklahoma DR Director Sam Porter dispatched the convention’s “Strike Force,” to set up its large feeding unit capable of producing 30,000 meals per day on the campus of Istruma Church, 10500 Sam Rushing Rd. in the eastern part of Baton Rouge. The feeding unit consists of two 18 wheelers and a 24-foot, refrigerated box truck. In addition, the BGCO sent a shower trailer under the direction of Wes and Jean Johnson from Chandler.

“The strike force, which consists of about six men, got the equipment there and made sure it was all set up, then the main workforce followed one day later on our bus,” Porter said. “There are only a handful of guys who know how to set up the large feeding unit.”

Included in Oklahoma group is Dean Kiser of Arcadia, who is chairman of the Southern Baptist Convention’s national DR feeding team. He is working closely with Eddie Blackmon of the North American Mission Board (NAMB) and Louisiana Baptist Convention DR Director Gibbie McMillen, who requested assistance from Oklahoma.

Porter later issued a statewide callout to all DR volunteers asking them to help.

“WE NEED YOU!!! Louisiana has asked for our help. We are building feeding teams to go to Baton Rouge now through the end of September,” the plea said.

“We probably can’t get in and work on homes for several days until the water recedes,” Porter said. “We will send mud-out teams in when that happens.”

Porter added that LeFlore Association in Southeast Oklahoma has a formal association to association relationship with Northshore Association on the north side of Lake Pontchartrain in Louisiana, which is just north of New Orleans.

“Neil O’Donnell, the Director of Missions (DOM) in Le Flore, has been contacted by the North Shore DOM, and they plan to work together,” Porter said. “The Oklahoma group from LeFlore left for the area Aug. 15. to help prepare for the mass recovery undertaking ahead.”

At least 40,000 homes were damaged and 13 people were killed in the historic Louisiana floods. Beginning Aug. 12, a deluge of about 2 feet of rain inundated the southern part of Louisiana during a 48-hour period.

Three other kitchens will be staffed by DR volunteers from Louisiana, Mississippi, Missouri, and the Southern Baptists of Texas Convention. They include Hammond, Woodlawn, (The) Bayou Church in Lafayette and Walker Church. Also, there are 16 other Baptist churches set up as designated worksites.

Mickey Caison, executive director for Southern Baptist DR at NAMB, said “There were reports of 280 road closures, and some recues still occurring Aug. 17.”

Caison said some south Louisiana residents have compared the scope of the devastation to Hurricane Katrina. He said he expects the long-term nature of the rebuild to take years.

It will be costly, Porter added.

“The Disaster Relief ministry of the BGCO will spend several thousand dollars the next four to five weeks helping hundreds of flood victims,” he said. “Our initial fuel costs alone will be more than $2,000.”

For updates, or to donate, visit www.okdisasterhelp.org.