For this week’s DHD, I decided to spotlight six Christian athletes. These are people either I’m well familiar with or have been fascinated by their stories and have followed them for a few years.

There are many athletes who are living out their faith, and it can be refreshing to see, especially since sports are of high interest, and people, especially children and young people, try to emulate athletes.

Many of these athletes are popular; some are not as widely known or could be unfamiliar. But to me—and this is my blog—they have shown behavior or have communicated they hold a Christian worldview.

Allyson could be my favorite Olympic athlete this summer. She is one of the most decorated female track athletes in history and was among Time Magazine’s 100 Most Influential in 2020.

Allyson shared her testimony through Athletes in Action, and she mentions her father is a seminary professor at The Master’s Seminary in Los Angeles, Calif.

“In the season of my life that I am in now,” she wrote, “I feel so blessed that God has given me the talent of running. My running is an amazing gift from God and I want to use it to the best of my ability to glorify Him… I’m thankful that I have been given this platform so that I can share my faith with the world!”

Landry is mostly known for playing quarterback for the University of Oklahoma. His professional career wasn’t very successful, playing most of the time for the Pittsburgh Steelers.

But what impressed me the most about Landry was the influence he made on former OU wide receiver Ryan Broyles. Landry led Ryan to Christ. This was relayed in an article by Oklahoman’s Jenni Carlson. This is an amazing story because Broyles lifestyle did not reflect Christian standards before he and Landry started doing a Bible study. Broyles has proven to be a changed man, and God used Landry to change his life.

I did not know much about Jonathan before he decided to go against the grain in the National Basketball Association last year and chose to remain standing during the playing of the National Anthem, while others knelt.

A forward for the Orlando Magic, Isaac said his reason to stand was his Christian faith, and though he does believe there is a problem of racism, he believes the solution is the Gospel. He also led a prayer walk called “Hold Up the Lights” in Orlando last November with hundreds of supporters participating.

“I’ve experienced what it is to walk with God, to have my heart transformed by God, to know that God loves me, that God loves everybody out here, and God really desires to help us walk through life with changes for the better and for us to be in relationship with him,” Isaac said. “So, I’ve experienced that, and it bleeds into every part of my life. It’s who I am.”

Ben Watson flew under the radar as a tight end in the National Football League, but he did play for successful teams, including the New Orleans Saints, Baltimore Ravens and New England Patriots.

But Ben is easily detected doing work for the Gospel. An outspoken advocate for the Sanctity of Human Life, he and his wife Kristen donates ultrasound equipment to many pregnancy centers. He also is a regular speaker at March for Life in D.C., and his wife did an excellent video responding to abortion advocates’ misnomer “My body my choice.” To be honest, after watching Kristen in this video, I might be a bigger fan of her. I dedicated a DHD explaining why I love this video.

Ben is also sharing the Christian faith in other circles. He co-wrote an article with Tony Dungy in January titled “A Call to the American Church,” offering a charge to Christians to read the Bible, pray, repent, be involved in church and give tithes and offerings.

I like Tress Way—and it seem like a lot of people do too. The former OU Sooner has been an NFL punter for the past eight years, but check out this NFL Film production that asks the question why Tress is so popular:

I’ve never met Tress, but I did interview his wife Brianna for a Baptist Messenger story when she was a member of the OU softball team. I can tell both Ways have a solid biblical marriage and are living out their faith.

Tress shared his testimony with Fellowship of Christian Athletes in an article he wrote titled “Trusting God’s Way.”

His birth name is Andrew Doherty, but even Team USA calls him Adoh. He is the national champion in the duathlon, and he sent me this photo this morning: 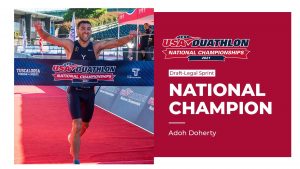 Adoh has a fascinating testimony, and the Baptist Messenger has kept up with his spiritual journey while he pursues the Olympics competing in the triathlon.

The second story gives an update on the growth of the Bible study Adoh was leading, while he also decided to change track events from competing in the Steeplechase to becoming a triathlete—“Adoh on the go: OU track athlete still serving God, has Olympic goals.”

Much of Adoh’s spiritual growth is attributed to his involvement with Baptist Collegiate Ministry (BCM) at OU.

“The BCM is an incredible resource,” he said. “It provides community which is one of the pillars of living the Christian life.

“The BCM is a place where I can meet people outside of my ‘bubble,’” Adoh continued. “Being a student-athlete, you put yourself in a bubble. I choose to come here because this is true Christian community. I meet people who help me grow. They hold me accountable.”

There are many more Christian athletes who are living out their faith and offer encouraging stories. Who is an athlete you admire?