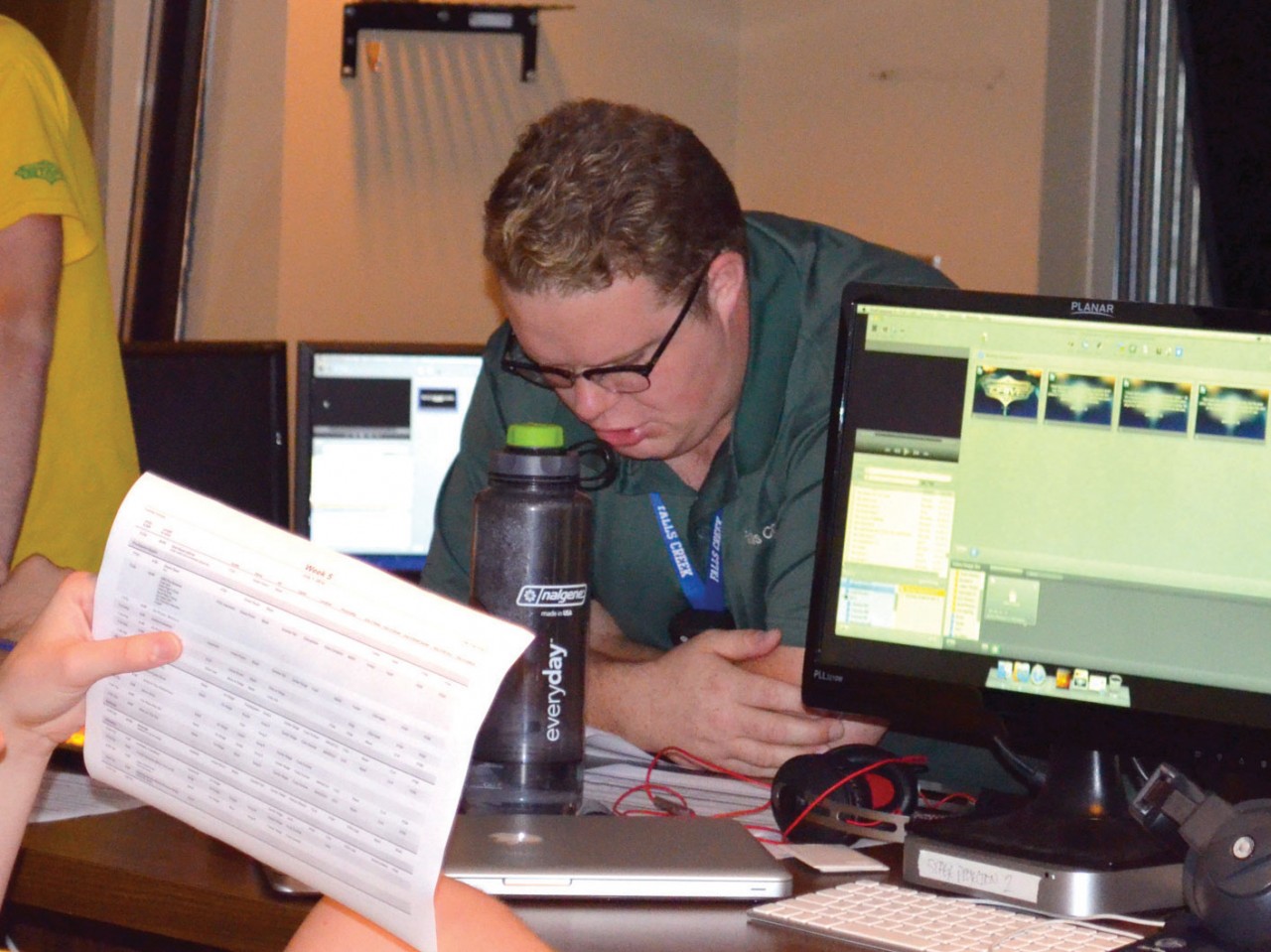 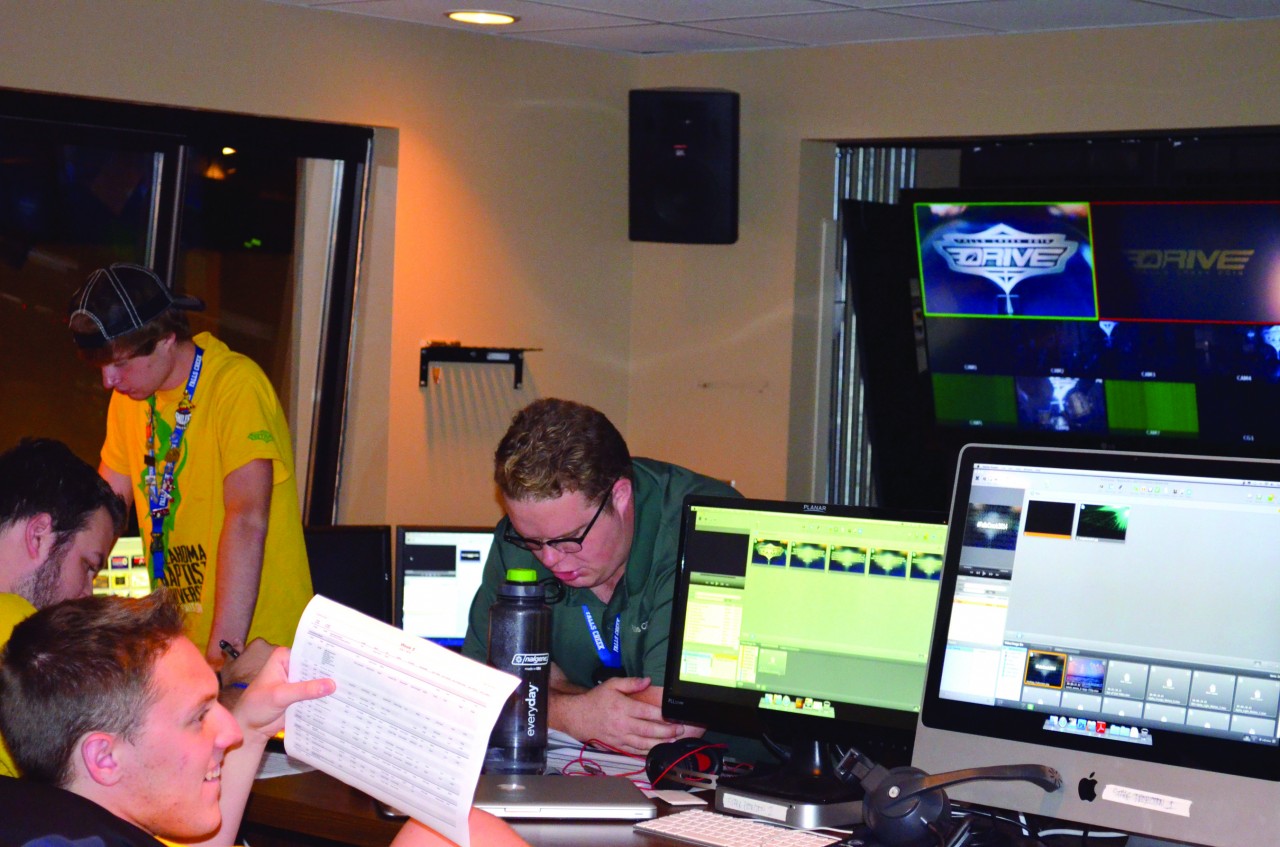 Michael Davis looks over the production agenda for the evening service at Falls Creek.

DAVIS—Countless stories are told about people who made a decision at Falls Creek to serve in missions. Most of these decisions are made by students. For Michael Davis, such a decision happened after working seven years at the Christian camp.

In 2008, Davis was hired by James Lankford, current Oklahoma U.S. Representative who previously served as Falls Creek program director. That year, the services were in the amphitheater while the R.A. Young Tabernacle was under construction. That summer was the beginning of utilizing visual arts in the camp services, and Davis was in on the ground floor of what is now a major element of the Falls Creek experience.

Davis was hired to do highlight videos, but once he got to camp, he was put in charge of directing all the productions during the junior high services. He would call camera shots and oversee the lyrics shown on the screens. He said this was a major upgrade to his original responsibilities.

Though he knew this was great experience for him, Davis said he looked at his initial Falls Creek duties as “a summer job and not a ministry.” He did excel at his work, learning how to direct and lead a team, and eventually was offered the position of producer, in which he has served the past four summers.

Davis said some of his favorite moments working at Falls Creek are when former campers from years ago come on the campgrounds for “the first time in 30 years.” He gives tours of the new tabernacle, which is much different from the days of the open-air tabernacle.

“I get to open the tabernacle and let them walk in,” said Davis. “The awe that is on their faces never gets old. You hear story after story of how God has changed their lives.”

Though he enjoyed hearing their stories, Davis said, for him, the thought of actually doing ministry or mission work did not apply to him. As a child, going on mission trips was nothing out of the ordinary. He grew up in Kansas, and his church would go to Nebraska every year on a mission trip.

In 2005, Davis discovered his passion to travel internationally. As a Falls Creek camper, he committed to be a part of the GO Student ministries, and signed up to travel to Germany. From there, he became an exchange student in Japan. 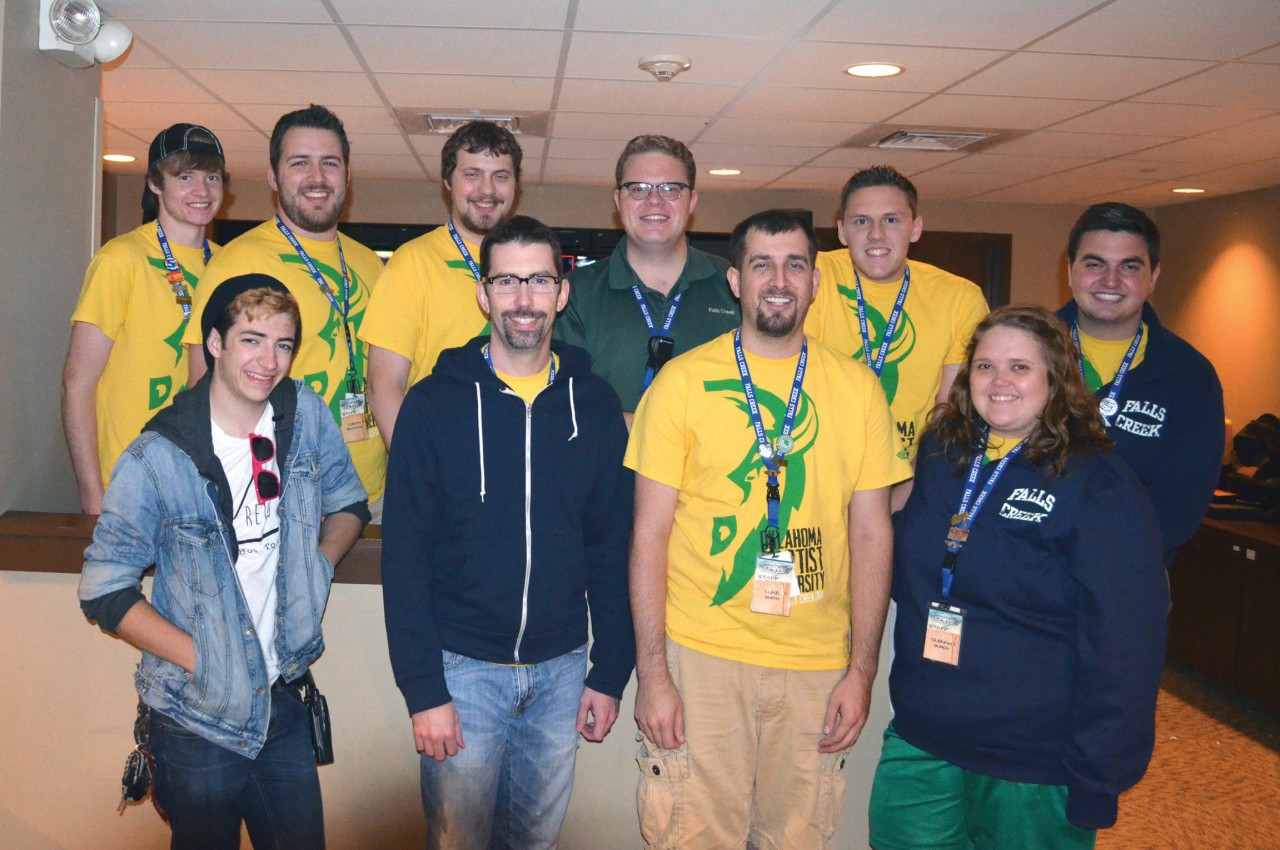 In 2011, he was a “world traveler,” taking another visit to Germany, as well as going to Haiti and then capped his globetrotting with a mission trip to Malawi with Ada, Morris Memorial, his home church.

On the trip to Haiti Davis took as a student at the University of Oklahoma, he was assigned to document his team’s experience.

“I got good at seeing hurt and pain through a lens,” he said, describing how he was able to separate himself from feeling people’s needs. “It was ‘easy’ that way.”

His trip to Malawi, though, provided a different experience. Davis said he made some good friends in Malawi, and they helped him come to a greater understanding.

“God wants my whole heart, not just part of it,” he said he learned through his friends’ influence. “That was a realization I had never had. I was just going to school, shooting video and working at Falls Creek. I always thought this is what missionaries do, but it hadn’t made sense to me that it is a calling in all of our lives until then.”

After he came back to the U.S., Davis’ passion for Malawi grew. He was able to go back to the African country in 2013. That trip, he said, was even a greater spiritual awakening for him. He didn’t get his camera out until five days after he arrived in Malawi. In those five days, he said he fell in love with the people.

“I just wanted to figure out how to stay,” Davis said.

With a suggestion from a close friend in Malawi, Davis looked at a teaching opportunity at African Bible College. He found out they needed broadcasting teachers. What was interesting about this opportunity is Davis has no formal education in broadcast journalism; he has a degree in film and media studies. For the administration at African Bible College, though, they were excited Davis was interested and offered him a job.

As the summer weeks at Falls Creek conclude, so does Davis’ time at the campgrounds near Davis. His local summer job has turned into a ministry abroad.