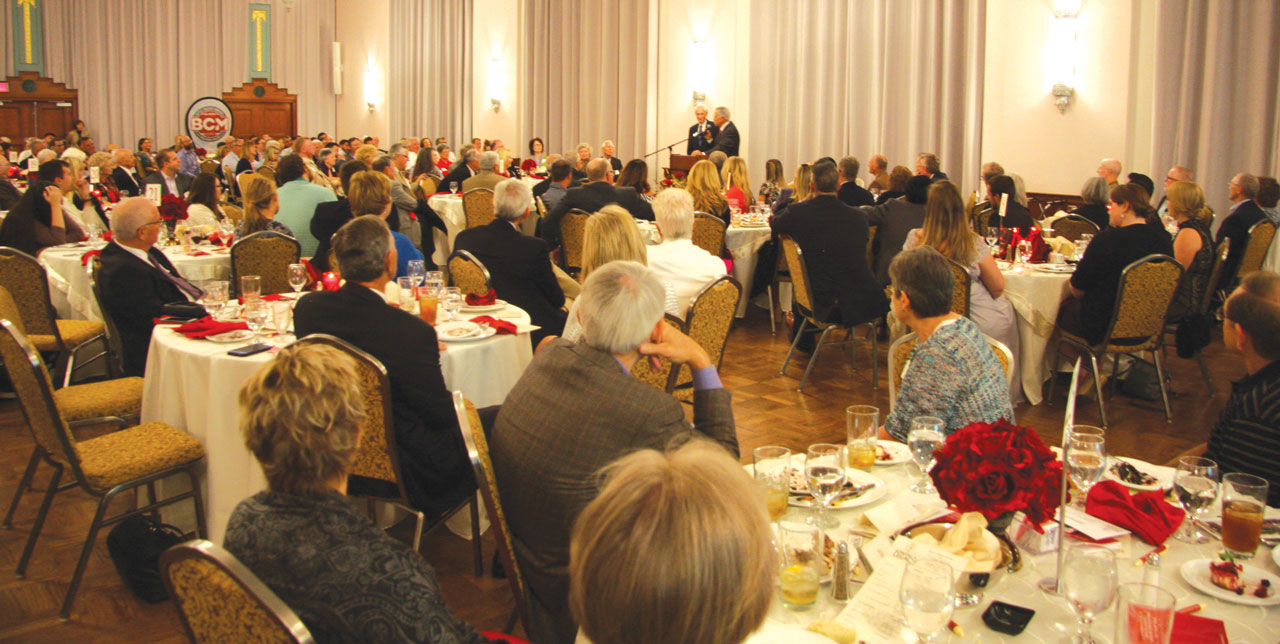 NORMAN—The public announcement of a major gift to the Baptist Collegiate Ministry (BCM) at the University of Oklahoma (OU) capital campaign was so significant, it was met with responses ranging from “Hallelujah!” to “Boomer Sooner!”

The $4.2 million gift toward the OU BCM capital campaign was announced on Sept. 14, to hundreds of OU BSU/BCM alumni and supporters gathered for a celebration dinner at the Oklahoma City Civic Center’s banquet hall. 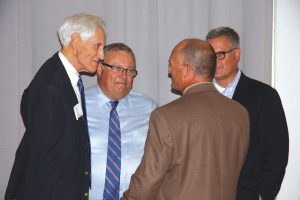 Kirk Humphreys, former mayor of Oklahoma City and an alumnus of the OU BSU (now BCM), emceed the event and has served as co-chair of the “Sowing A Legacy” capital campaign. The $10.3 million will construct a new two-story, 28,400 square-foot building on the OU campus in Norman.

“From before my days as a student at OU, right on up to this day, the OU BSU (BCM) has made a significant impact for Christ,” said Humphreys, OU Class of 1972.

Humphreys and former OU BCM director Max Barnett (who served from 1967-2004) announced the major commitment, which was made by Steve Trice, founder and chairman of the board of Jasco Products, an Oklahoma City-based company, founded in 1975, that produces consumer electronics and electronics accessories.

Trice and his wife NeAnn were recognized at the banquet and given a standing ovation.

“I do not attend a Baptist Church. I did not come to Christ until I was 43 years old,” Trice, an OU alumnus, said. “And I don’t know where I would be if it weren’t for two Baptist men who poured into my life for more than 15 years, teaching me how to hear, read, study, memorize and meditate on God’s Word every day of my life. God used those men to make a tremendous change in my life.”

He added, “Whether it is Baptist or Presbyterian, it’s about Jesus Christ and discipling young people, and we are just thrilled and so thankful to be a part of supporting the Baptist Collegiate Ministry. God bless you all.”

Anthony Jordan, BGCO executive director-treasurer, spoke at the banquet, thanking the Trices and all who are giving toward the “Sowing A Legacy” OU BCM work.

“According to the International Mission Board, more Southern Baptist missionaries have come from OU than any other state college or university. This BCM truly has a worldwide impact,” Jordan said. “We believe the college campus is the largest mission field in this country.”

Jordan then challenged banquet attendees and others to give generously toward the “Sowing A Legacy” campaign. 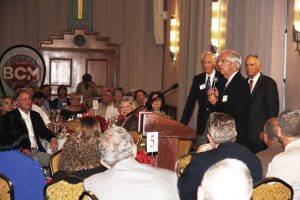 Steve Trice, standing with microphone, made an historic $4.2 million pledge to the OU BCM building campaign.

He said, “Thanks be to God that our generous donors are making possible the construction of this new building, and we now want to establish a staff assistance endowment that will be used to support OU BCM staff members who raise their own support.”

The “Boomer Goal,” which totals $6.27 million, will construct the new BCM facility at 1203 Elm Ave. in Norman, which is within walking distance of the majority of student dorms and proposed student housing. The new BCM building will provide easy access to more than 6,000 students and act as a multi-use facility, with large meeting spaces, offices, areas for fellowship and a coffee shop. In this setting, students can participate in activities focused on prayer, Bible study, worship, trainings and fellowship. This goal includes establishing a building endowment of $500,000, as well.

The “Sooner Goal” for the capital campaign aims to raise an additional $4 million to establish a permanent endowment fund from which annual earnings can be used to support OU BCM staff members who raise their own support by providing health insurance and retirement. Banquet attendees were asked to give generously toward this goal. Almost $6.6 million has been raised toward the $10.27 million combined “Boomer” and “Sooner” goals.

Attendees also heard from various OU BSU/BCM alumni. Former OU football standout Joe Wylie (OU Class of 1974) shared a testimony about how the Baptist campus ministry changed his life. “From Bible studies to evangelism to relationships, the OU BSU had an enormous impact on my life and many of my friends, including OU football players. I don’t know where I would be in life without this ministry,” he said.

Bronson Baker, OU Class of 2014, now serves on the OU BCM staff and shared how the ministry taught him “what it means to be a follower of Jesus Christ.”

Then a current OU student shared how he was a Hindu all of his life. After the OU BCM staff shared the Gospel with him over a several-year period, he made a profession of faith in Christ.

“It would have been easy for these guys to give up on me,” the young man said. “They could have said, ‘We tried, but he rejected the Gospel.’ Their faithfulness to walk with me, to befriend me, to share with me made all the difference.”

The young man made known his faith in Christ to his parents, who are Hindu. “I did not want to disrespect my parents, and I was fearful of how they would react. But God has given me grace in this area. Jesus is worth it.”

The BGCO operates Baptist Collegiate Ministries on more than 30 campuses across the state.

// How to get involved

A special video presenting the legacy of the OU BSU/BCM was shown at the banquet, highlighting various testimonies. The video can be viewed at www.bgco.org/sowingalegacy-video. For more information, or to participate in “Sowing A Legacy,” go to www.bgco.org/ou-bcm, or contact Steve Thomas at 405/416-4868, or email sthomas@bgco.org.