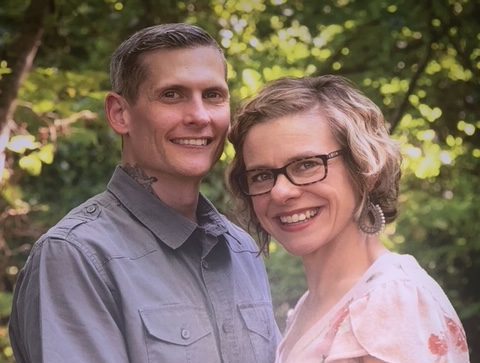 “On paper, it wasn’t what we were ready for,” said Bubba, who leads men’s ministries for Oklahoma Baptists, “but God worked it out. We got a call that this child was in need and was going to go to the hospital if we didn’t step in.”

The Burchams responded and, in October of 2020, received into their home one of the more than 7,000 children in Oklahoma needing care—a six-year-old Autistic boy named Tyler, who made no sounds and was not walking. He had been in the state system for two years with 14 different stops along the way.

“We fed him, read him books and showed him Veggie Tales videos,” Burcham said. “We just showed him love and care, but we also pushed him.”

They also socialized him, including taking him to their church, Coweta, Community, where Adam pastors and his wife, Grace, volunteers with special needs children. Grace had met Tyler at church and admitted that, “God was knocking on my heart.”

God knocks on several hearts at Community where a culture for childcare has developed. In a church of 450 members, 19 families are or have fostered or adopted. Among the families who have adopted previously are the Burchams and the Masks.

“My wife knew a long time before I did that God had a place for Tyler in our home,” Adam said. “We were always open to fostering and adoption, but special needs was not on my radar.”

Then one night, Adam was visiting in the children’s ministry when a young boy, a stranger to Adam, approached him unannounced and hugged him.

“The ladies working in that area said, ‘It’s amazing that he hugged you. He doesn’t do that for anyone,’” Adam said. “It was kind of a God thing.”

Indeed, it was. Grace later informed her husband that the boy who had hugged him was Tyler.

The Masks began providing respite care for the Burchams. The increased time with the Masks centered Tyler in the family’s prayer life.

“One night I had been praying for him while I was rocking my youngest son,” Grace said. “God woke me up out of that deep sleep and the words I sensed were from Him were, ‘Fight for Tyler. He is the voiceless.’ I didn’t know how I could say no.”

Prov. 31:8 had been an important verse for the Masks. It took on even greater significance: “Speak up for those who cannot speak for themselves, for the rights of all who are destitute.”

In most cases, Adam and Grace are on the same page. Both have hearts for fostering, adoption and orphans. In this instance, it took Adam a little longer.

“It wasn’t a Damascus Road experience for me,” Adam said, “but, as usual, my wife was ahead of me on God’s plan.”

“I just kept asking him if he was praying about it,” Grace said.

Adam was praying, and it wasn’t long before the wheels were in motion to move Tyler from the Burcham home to the Mask home for foster care.

“Bubba and Miranda had done such a wonderful job and are such committed servants,” Adam said. “We developed this special connection with Tyler and thought maybe our home could be the last for him.”

At the end of April, Tyler made the move. A fairy tale might end right there, but fostering and adoption are non-fiction.

“You can’t fully prepare,” Adam said when addressing the details of fostering a special needs child,” but it’s not about being ready; it’s about being obedient to God’s call. It’s tough sometimes, but you have to remember that these kids are dealing with things that would challenge adults, and they’re facing them as children.

“It’s a spiritual battle. The enemy doesn’t want to give him up. It’s great to give a child a home and to have them in our families, but if we don’t tell them about Christ and give them an eternal home, we’ve practiced social gospel. There’s value in that, but ultimately, this is God’s call on our lives.”

Grace added, “The Lord prepares us for what He calls us to do. He puts people around us to hold up our arms; people like the Burchams and other people in our church. Everyone should be in prayer about (childcare). We can’t let our feelings keep us from being blessed.”

Tyler is making progress. He knows the names of those in the Mask family, and he’s beginning to articulate a few words. Obsessed with books, he recently took one to Grace and pointed to the words, “love you,” on the page.

“He’s such a joy, such a loving kid,” Adam said. “He’s such a testimony. Our kids (the Masks have three other children, ages 15, 7 and 3) have taken to him and loved him. Believe me, God is using him in so many people’s lives.”

Who could have seen all of that coming among two families who had planned for something much different? Adam knows. “Clearly, God was orchestrating all these things,” he said. “We’re praying this will lead others to open their homes to be a foster family.”

View all posts by Kenny Mossman