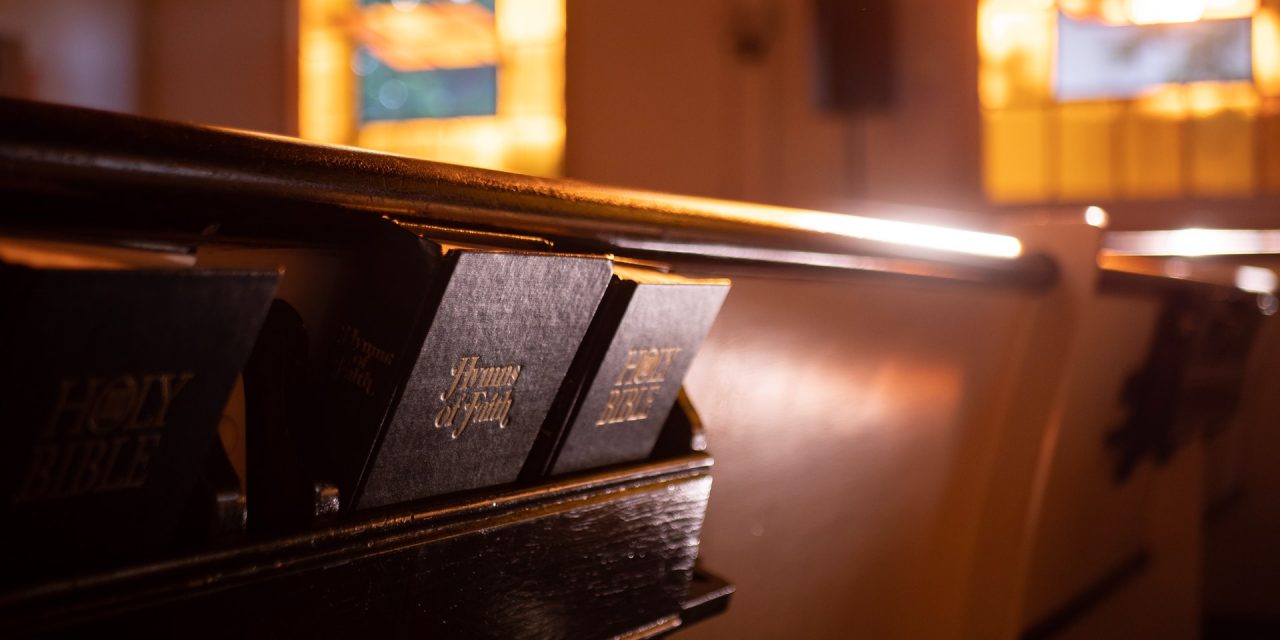 NASHVILLE, Tenn.—Compared to the beginning of 2021, more U.S. Protestant churches are gathering in person, and more churchgoers are filling the pews. The return to pre-pandemic attendance levels has stalled, however, in recent months. 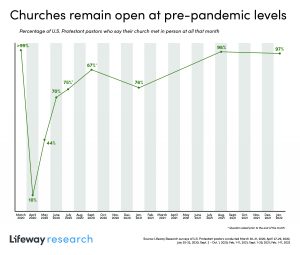 The latest Lifeway Research study found, despite a new variant wave of COVID-19, 97 percent of U.S. Protestant churches met in person during January 2022, while 3 percent say they did not gather for in-person services.

The percentage of churches meeting in person is statistically unchanged from an August 2021 Lifeway Research study, when 98 percent of churches physically gathered, but is up significantly from the 76 percent that met in January 2021.

“Almost all churches are able to meet in person for worship, though a few are struggling to re-open their doors,” said Scott McConnell, executive director of Lifeway Research. “Many more churches are working to restart all their important ministries and continuing to encourage people to resume in-person participation.” 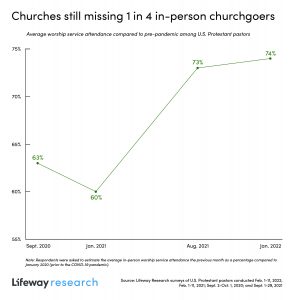 “People’s return to in-person worship services has stalled,” McConnell said. “There has been virtually no change in average attendance since August 2021. Some of this is the direct impact of COVID with people getting sick, needing to quarantine or being at high risk. But this also likely includes healthy individuals choosing to not return.”

The smallest churches, those with attendance less than 50 before COVID-19, are the most likely to be back at pre-pandemic levels. More than a third of those small churches (37 percent) report their attendance is at least 90 percent of what it was in January 2020, including 18 percent who say they have grown numerically during the pandemic.

Most churches shifted to some type of online video services during the height of the pandemic. Now, many are asking those watching online to participate in person.

In January 2022, more than 9 in 10 U.S. Protestant pastors (94 percent) say their churches provided some type of video content for their congregations, including 84 percent who livestreamed their worship services and 10 percent who posted a video of the sermon later. Prior to the pandemic, Lifeway Research found 2 in 5 churches said they neither livestreamed their service nor posted the sermon online later.

As the pandemic progressed, more churches shifted to livestreaming services. In March 2020, around 2 in 3 pastors (65 percent) said they livestreamed services, and more than a quarter (27 percent) posted a sermon online later.

With more churches using online video in recent years, 45 percent of Americans said they watched a Christian church service online during the pandemic, including 15 percent who say they normally don’t attend church, according to a 2021 Lifeway Research study.

Now, however, as almost all churches are holding in-person services again, many pastors say they want to see some online viewers make the transition to physical participation. Three in 5 pastors (60 percent) say they are exhorting online worshipers, who are able, to resume or begin to attend in person.

“Livestreaming has done a lot of good for churches, allowing members to hear weekly messages during the pandemic and allowing churches to reach new people,” McConnell said. “Many pastors are hoping and actively working to reduce the number of shut-in members who are physically able but aren’t gathering in person with other believers.”

Evangelical pastors (70 percent) are more likely than mainline pastors (49 percent) to say they’re specifically encouraging those watching online to physically attend if they are able. Pastors of churches with 200 or more in attendance on Sunday (72 percent) are more likely than smaller churches to also say they’re asking those able to make the transition from online to in person. 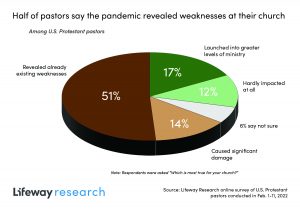 The pandemic continues to have a lasting impact on congregations, and most pastors say that it has been a negative one. Half (51 percent) say COVID-19 revealed weaknesses that already existed in their ministry, and 14 percent say the pandemic caused considerable damage to the church’s ministry. Far fewer say COVID-19 has hardly had any ministry impact on the congregation (12 percent) or has launched the church to greater levels of ministry (17 percent).

Most congregations have faced COVID-19 directly. Almost 9 in 10 pastors (88 percent) say someone in their church has been diagnosed with COVID-19 in the last six months. Around 1 in 5 congregations (21 percent) say a churchgoer has died from COVID-19.

Additionally, 88 percent of U.S. Protestant pastors say attendees at their church have helped each other with tangible needs in the past six months. Almost 2 in 3 (63 percent) say churchgoers have recently met pandemic-related needs in the community. In a 2021 Lifeway Research study, most Americans (53 percent) said churches in their community have been helpful during the pandemic.

While only 12 percent of churches say they have grown numerically during the pandemic, most say they have connected with new people during the last six months. More than 4 in 5 pastors (83 percent) say new people who haven’t attended their church in the past have recently attended or connected in person. Around 3 in 4 pastors (74 percent) say they’ve had new people attend or connect with their church online in the past six months. Still, a third of pastors (33 percent) say the considerable number of needs within their congregation has made it hard to focus on reaching their community.

Two in 5 pastors (40 percent) admit that it’s hard to keep a positive tone among the leaders of the church. When asked directly about the attitude of the congregation, a quarter of pastors (24 percent) say the church is concerned about having fewer people and activities than before the pandemic, 27 percent say their congregation is moving forward but is exhausted trying to cover all the bases, and 44 percent say the congregation is excited about what God is doing today. 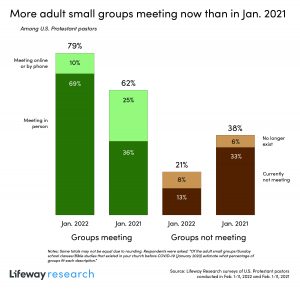 More small groups are meeting now, and more are meeting in person compared to last January. On average, pastors now report 79 percent of their small group classes for adults that existed prior to the pandemic are now meeting, including 69 percent that are gathering in person. In January 2021, 36 percent of groups that existed before COVID-19 met in person, 25 percent connected online or by phone, 33 percent didn’t meet and 6 percent no longer existed. Today, 13 percent of groups aren’t meeting, and 8 percent no longer exist.

Among churches that had student and kids ministry activities prior to the pandemic, most have restarted but have yet to see their attendance return to pre-pandemic levels. Churches also remain more hesitant to resume all activities for children compared to teenagers.

Almost 9 in 10 pastors who had student ministries prior to COVID-19 say they have resumed at least some activities in person (86 percent), including 70 percent who say all their activities are back to meeting in person.

In the average U.S. Protestant church holding at least some of their kids ministry activities, 64 percent of kids are participating compared to pre-pandemic attendance. Three in 5 (60 percent) say attendance is below 90 percent of what it was before COVID-19. And again, like with student ministries, 32 percent report attendance close to early 2020 levels, and 8 percent say their kids ministry has grown.

“The typical church has made great progress this last year in resuming Bible studies for all ages,” McConnell said. “Restarting Sunday schools and small groups have allowed the majority of pre-pandemic participants to re-engage in this vital connecting point.”

The online survey of 560 Protestant pastors was conducted Feb. 1-11, 2022. Invitations were emailed to the Lifeway Research Pastor Panel followed by two reminders. The probability sample of Protestant churches was created by Lifeway Research through direct recruiting from random samples selected from all Protestant churches. Pastors who agree to be contacted by email for future surveys make up this Lifeway Research Pastor Panel. Each survey was completed by the senior or sole pastor or a minister at the church. Responses were weighted by church average attendance, region, ethnicity of pastor and whether the pastor self-identified as evangelical or mainline to reflect the population more accurately.

The final sample is 560 usable surveys. The sample provides 95 percent confidence that the sampling error does not exceed plus or minus 6.2 percent. This margin of error accounts for the effect of weighting. Margins of error are higher in sub-groups. Comparisons are made to a survey using the same methodology conducted Feb. 1-11, 2021, with 430 completes, April 27-29, 2020, with 470 completes and March 30-31, 2020, with 400 completes.

For more information, read the complete report and visit LifewayResearch.com.

Photo by Aaron Burden on Unsplash