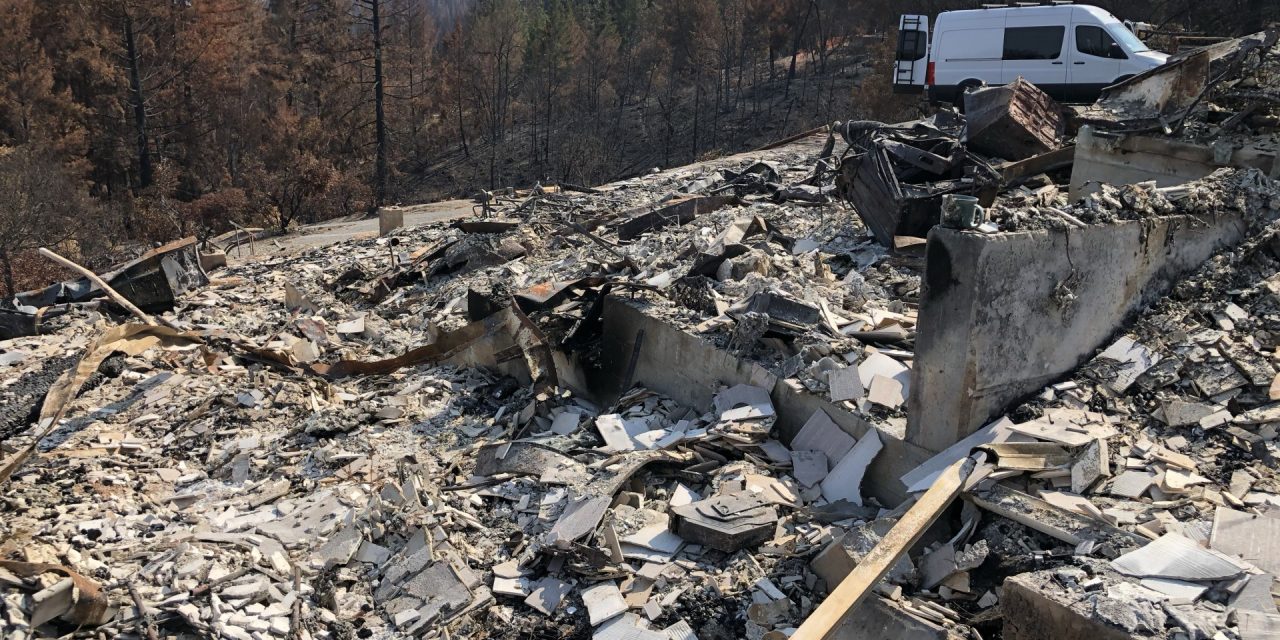 SANTA CRUZ, Calif.—On Aug. 16, Pastor Drew Cunningham woke up to an urgent 1:30 a.m. text from Tyler Hurt, his associate pastor. A family of eight Cunningham knew had been evacuated because fires were coming through the Santa Cruz Mountains, and they had nowhere to go.

It was the beginning of a mega fire that would cover 86,000 acres, destroying more than 1,200 homes, ravaging 40 percent of the area’s redwood forest and displacing about 77,000 people.

Quickly, the pastors jumped into action providing sleeping bags and mattresses for the family, letting them sleep in the church sanctuary.

“The next morning the staff huddled together,” Cunningham recalled. “We said, ‘These aren’t going to be the only people that are evacuated. How can we serve people in the name of Jesus?’ Immediately we started making phone calls and posting on Facebook, letting people know that if they needed help that we were available.

“We converted all of our Sunday school rooms, offices, fellowship hall and sanctuary into hotel-like accommodations,” he explained. “We set up house plants, inflatable beds, got games for kids and started taking people in—pets and all. We had two cats, a dog and a bird at one point as well.”

The church took in 38 people who needed emergency accommodations, caring for them, feeding them three meals a day for 16 days. “Most importantly, we were able to pray with and share the Gospel with each of these people,” he said.

Cunningham, a native Oklahoman, also reached out to his home church, Edmond, Henderson Hills, to help coordinate a response from Oklahoma Baptists in the days ahead to meet the needs of Santa Cruz families who lost their homes.

“We heard from people who were in the Paradise and Santa Rose fires that it takes about two to two and a half years before people are able to build back to where they were before the fires,” he said. “We want to step into that however we can and allow people to see the tangible body of Christ at play in this situation. This is a huge opportunity for us to link arms with churches from Oklahoma to do that.”

Mike Wall, Henderson Hills’ pastor of global and local outreach, said his church will be working with Cunningham and the Santa Cruz church in meeting the needs of the California community. In the weeks ahead, groups coordinating with Henderson Hills will be clearing burned debris and sharing the Gospel with people.

“It’s such a huge blessing to be able to work with somebody like Drew,” Wall said, “for our church to walk with them, to help them, to do things so they can be the church there and just provide more bodies on the ground especially in a time of need.”

Wall said he’s discovered that responding to a fire is different from other ministry work he has done.

“I have done a lot of things with natural disasters, but this is my first fire,” he said. “There is not a whole lot of rebuilding, or those kind of things. It’s mainly helping people walk through difficult things. You don’t need a lot of time; in three or four days you can get a lot done. Drew has all the facilities to stay at, so it’s really pretty easy. The work that needs to be done is just getting your hands dirty, sharing the Gospel and praying with people.  If anyone wants to help, we would love for them to go with us, or can help them with the information and they need to help.”

For more information about joining Henderson Hills in providing a response to the Santa Cruz fires, contact Mike Wall at mwall@hhbc.com.