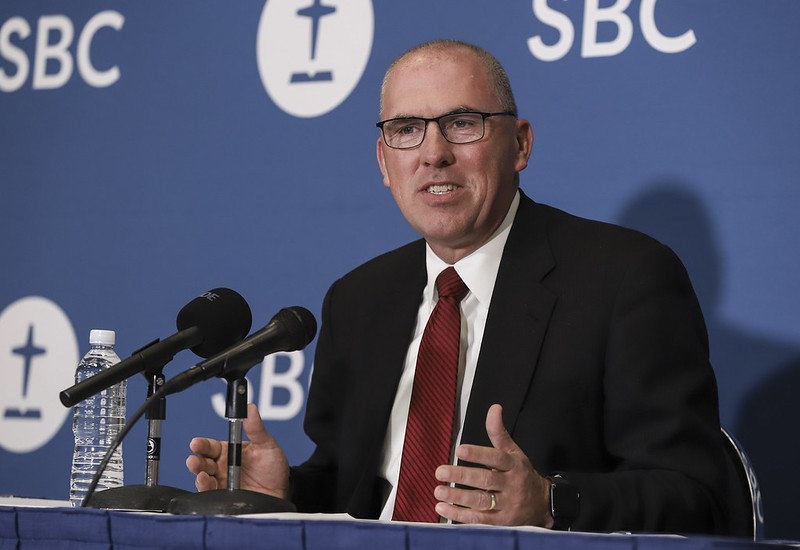 At a press conference June 15, Barber said his first priority as the newly elected 47th president of the Southern Baptist Convention will be assembling a knowledgeable team of individuals to serve on an Abuse Reform Implementation Task Force, a move approved by messengers Tuesday June 14 in response to recommendations from the Sexual Abuse Task Force established by messengers at the 2021 meeting.

“Sexual predators have used our decentralized polity to try to turn our churches into a hunting ground,” Barber said. “In some cases, mov(ing) from church to church, from scandal to scandal, manipulating our system to hide from accountability and pick off the sheep one by one.

“And yet, our decentralized polity can become, rather than a hunting ground in which predators brutalize their prey, a place where sexual predators are put on notice that the tables have turned and where the hunter is now the hunted…

“The messengers wanted to see the facts. We have seen the facts, and we have mourned them,” Barber said, referencing a 288-page report released by the task force last month. “In response to the report, the messengers have indicated this year that they now want our Convention to act.”

Another task force recommendation adopted overwhelmingly June 14 is the establishment of a new task force (an Abuse Response Implementation Task Force) to study abuse reforms as well as the development of a “Ministry Check” website to share “properly vetted information.”

In responding to a question posed by Baptist Press, Barber said members selected to serve on the new task force would represent a diverse list of qualifications. Task force members would include individuals who are trauma informed and understand the needs of survivors, those who are well-apprised of Baptist polity and have strong relationships across the Southern Baptist Convention. They would be good listeners and communicators, he said.

“They’re also going to have to be people who see and understand the problem that we face and are doggedly committed to the goal of making our convention healthier in our ability to prevent abuse, to respond appropriately to abuse, and minister to survivors,” Barber said.

The entire press conference can be viewed here.