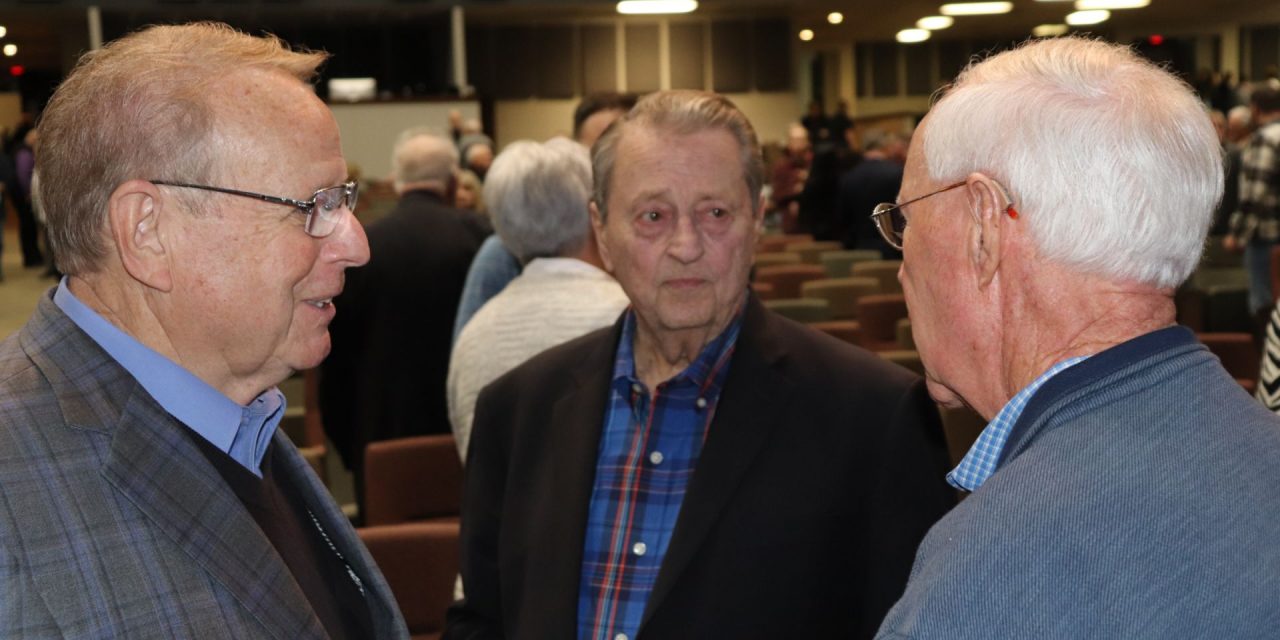 DEL CITY—Del City, First Southern celebrated a milestone 70th anniversary Nov. 5 in an evening celebration hosted in the church’s worship center. The well-attended event featured times of praise and worship, a documentary movie detailing the history of the congregation and testimonies from pastors and leaders, past and present. 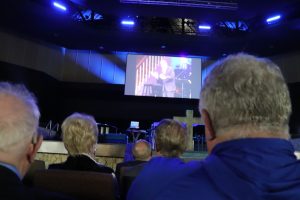 A 70-minute documentary was shown at the celebration, which was produced by the church.

A 70-minute documentary was shown, portraying a detailed history of the church. The film, which was produced by the church, featured interviews of First Southern members who recalled favorite memories and told stories about church leaders. The documentary was narrated by current executive and teaching pastor, Steve Russell, who is also known for his military service and time in elected office.

Through historic photos, video clips period music and interviews, the film described how the church was planted in 1951 as a mission of Oklahoma City, First and produced a number of noteworthy leaders over the years. 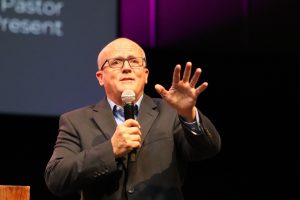 Current First Southern pastor Keith Burkhart shared his appreciation for the church body and its influence on him.

The film recounted how John Bisagno (1934 -2018) was a Dixieland jazz trumpeter, when he became a follower of Christ in 1952. He accepted a call to ministry and served as a music evangelist until serving as pastor of the church from 1965-1970.

“By 1969 the church had grown more in four years than the previous 14 years,” the documentary narrative said. Bisagno was called to Houston, Texas, First, where he served from 1970 to 2000. 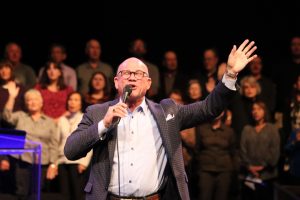 Gary Mathena was one of many music ministers featured at the celebration.

“Without a doubt this is the greatest church I ever served,” Draper said speaking of the church in an interview. “That’s no credit to me. It was that way when I got here. It has always been a strong, great fellowship with loving people.” 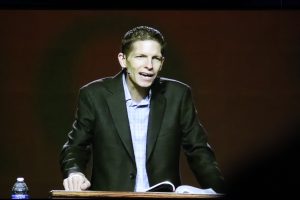 Shane Hall’s tenure at First Southern was featured in the documentary.

Tom Elliff was pastor of the church from 1985-2005. “Elliff and his family served two years as missionaries in Zimbabwe, Africa, from 1981-1983,” the film reported. “He had a heart for missions and so does First Southern. Elliff was the third First Southern pastor to become both president of the SBC’s Pastor’s Conference and president of the SBC (1996, 1997). He would faithfully serve our church for nearly 20 years, until October 23, 2005. He is now our pastor emeritus.”

Speaking in person at the event, Elliff commented about the fact that the church produced many national leaders. “I will have to tell you that it is a church that prays for its leadership,” Elliff said.

The film featured the tenure of Shane Hall (1971-2018). “Hall would come to us with a quick wit and a love for Jesus,” the film narrator said. ”He would oversee a complete renovation of our auditorium when a broken water pipe flooded the entire facility.”

“Our beloved Pastor Hall was diagnosed with stomach cancer in October 2014; he had been with us less than a year. We walked with Shane through his next 3 1⁄2 years as he battled this awful disease. He never lost his sense of humor or his desire for the lost to know Jesus as their Lord and Savior.”

Keith Burkhart, current pastor of the church has a long history with the church and shared his appreciation for the church body and its influence on him.

“I came to First Southern in 1976 as a junior in high school,” Burkhart explained. “I have been a part of the great landmark memories from Bailey Smith baptizing me to Tom Elliff helping me grow in Christ as a disciple. We have the rich heritage, but we are now having what I would call a rebirth. I am excited about the next generation. They are the most passionate and on fire group of people. It reminds me of our early days.”

The celebration event featured music ministers who served at First Southern over the years. James Bradford, Gary Mathena, Mitch Rayborn, Jason Henson and Colton Seamans led times of worship through music along with an anniversary choir.

Testimonies were offered by former pastors, including Tony Lambert, who pastored First Southern from 2007-13, as well as Bailey Smith’s son, Scott Smith.