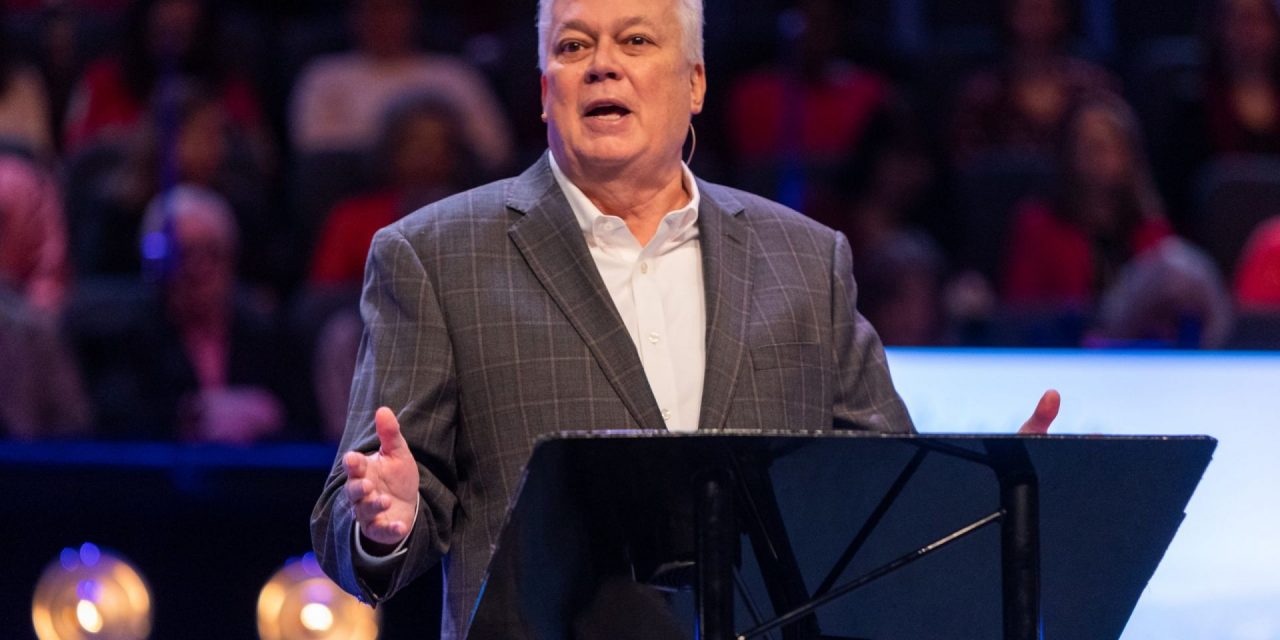 ALBANY, Ga. (BP)—Citing a desire not to stay one day too long or leave one day too soon, Michael Catt announced his retirement on Sunday, March 14 to the Albany, Ga., Sherwood congregation he has led as senior pastor since 1989.

Catt previously served as pastor of Ada, First, before going to serve at Sherwood and has been a camp speaker at Falls Creek summer youth weeks.

Known in its southwest Georgia community for its outreach efforts and growth under Catt’s leadership, Sherwood became more familiar nationally after 2003 with the formation of Sherwood Pictures, which would go on to produce movies including “Fireproof” and “Courageous.” Catt, who served as president of the 2008 SBC Pastors’ Conference, treated Southern Baptist pastors and guests at the conference to a free screening of Fireproof, which was released later that year.

Appearing with his wife Terri in a video announcement yesterday, Catt told viewers that the last Sunday in April would mark his final time to preach at Sherwood as pastor. Should their house be sold by the end of May, the couple will retire to their home in the mountains, he said.

Catt asked for the church to join in prayer for Sherwood’s transition team in seeking its next pastor, adding: “This is about you … asking God to lead you to that man.”

Southern Baptist leaders joined others on Twitter in thanking Catt for his ministry at Sherwood.

“Well done @MichaelCatt and the @SherwoodChurch testimony for the gospel around the world. Praying for you,” said Ronnie Floyd, president and CEO of the SBC Executive Committee.

In October 2018 Catt revealed on his blog that he had been diagnosed with prostate cancer and would be taking a medical sabbatical. He relayed in the video that ongoing treatment would also be given more attention during his retirement.

Only two years into his tenure, Sherwood was recognized by Church Growth Today as one of the 200 fastest-growing churches in North America in worship attendance. In total, church leaders count more than 3,200 baptisms and 3,800 new members with Catt as senior pastor.

Throughout the 1990s Sherwood expanded its footprint in the Albany area with a TV channel on Family Net and a school, Sherwood Christian Academy, which offered classes through the 12th grade. In 1994, a devastating flood in Albany and southwest Georgia led the church to open the doors of its family life center to 250 evacuees and more than 5,400 volunteers from 21 states. Church leaders say the event forged a bond between Sherwood and Mt. Zion Baptist Church, a majority African American congregation, allowing the two churches to move forward together in breaking down racial barriers.

In the latter part of the decade, developments took shape that positioned Sherwood for the national stage. Catt, a former staff member at Marietta, Ga., Roswell Street, was familiar with the technical skills of brothers Alex and Stephen Kendrick, who were on staff at Roswell Street at the time. In 1999, Alex Kendrick accepted a position as Sherwood’s associate pastor of media. He was joined two years later by Stephen, who became associate pastor of preaching and prayer.

Together the Kendrick brothers and Sherwood established Sherwood Pictures, thus beginning a run of films that started with 2003’s “Flywheel.” Made on a $20,000 budget with church members serving as cast and crew, it followed the unscrupulous dealings and ultimate redemption of a used car salesman played by Alex Kendrick.

Flywheel grossed $37,000 in sales, setting up Sherwood Pictures for bigger things. The next production, “Facing the Giants” (2006), brought in $10 million on a $100,000 budget. Fireproof used a $1 million budget to generate $33 million in ticket sales. Courageous (2011) ended with $35 million worldwide off a $2 million budget. Fireproof and Courageous each opened in the Top 5 nationally.

While theaters and movie distributors keep the majority of the theatrical gross, those funds also helped in Sherwood’s ministry.

In honor of one of Catt’s ministry heroes, Sherwood opened the Vance Havner House as a home for missionary families staying stateside on furlough. And the church introduced two new conferences in the 2000s—Bridge Builders with Warren Wiersbe offered leadership training for pastors, while ReFRESH began as a conference for those seeking revival. Since its first year, which saw 50 attendees baptized, ReFRESH has expanded to seven cities.

Under Catt’s leadership, Sherwood became involved in a host of ministries, including supporting church plants in San Francisco and Boston as well as opening a community sports park. In 2011, the church was gifted a former Coca-Cola bottling plant, which was remodeled for outreach and missions opportunities. Renamed The Hope Center, the facility hosts ministries such as life skills courses for youth and adults. In 2017 and 2018, The Hope Center served as a hub for disaster relief operations alongside Samaritan’s Purse following a tornado and Hurricane Michael, respectively.

Last year, Albany became the center of one of the first deadly outbreaks of COVID-19 in the U.S. Sherwood joined others in response, assisting in food distribution and gathering medical supplies. Church members fed hospital employees, sewed masks for essential workers and hosted distributions for food, masks and hand sanitizer.

“I’ve said to you several times, ‘Every pastor is an interim pastor,’” Catt told viewers yesterday. “And we’re all temporary residents of this earth. We have to be prepared for moments like this.”

Though he will no longer be an Albany resident, Catt offered his “availability and insights, if called upon” to his successor.

“You will not find me sticking my nose in his ministry here,” he said. “Once I pass this baton, it is passed. And it’s time for the next person to come, and run the race with you.”