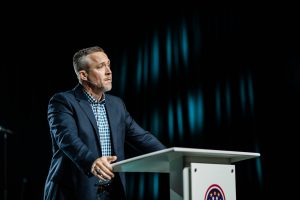 ‘(Sexual abuse) is a Gospel issue,’ SBC President J.D. Greear told the capacity crowd at Caring Well: Equipping the Church to Confront the Abuse Crisis. ‘The credibility of our witness and, even more importantly, the souls of our people are at stake.’ Karen Race Photography

Greear, SBC president, and Moore, ERLC president, spoke to a sellout audience of more than 1,650 registrants at the conference, “Caring Well: Equipping the Church to Confront the Abuse Crisis,” in Grapevine, Texas. The gathering—hosted by the ERLC in partnership with the SBC Sexual Abuse Advisory Group, which Greear convened last year—is designed to educate churches about abuse prevention and ministering to survivors of such abuse.

The conference’s first day featured presentations by female and male speakers, including testimonies from sexual abuse survivors, as well as a panel discussion regarding the issue in the SBC.

“This is a Gospel issue,” Greear told the capacity crowd in a convention center ballroom. “The credibility of our witness and, even more importantly, the souls of our people are at stake.”

Caring for those whom God has entrusted to the church “is a way that we can, and we must, put the trustworthiness of the Gospel on display,” he said.

Moore said, “Sexual abuse is awful in any context in any place, but church sexual abuse adds” Jesus to the predatory act and trauma, “and that is a perversion of the Gospel of Jesus Christ.”

Greear, pastor of Raleigh-Durham, N.C., The Summit, opened his address with an apology to sexual abuse survivors.

“I cannot speak for every Southern Baptist in America, but I can speak for myself and say that I’m sorry, truly sorry. As a pastor and as a dad, I’m sorry,” Greear said.

“Your church leaders should be the first to rush to your defense,” he told survivors, “and when we don’t do that, we dishonor the name of Christ; we betray the Gospel that has been committed to us.

“We have to learn from our past,” he noted, “and we have to change our future.”

In his message, Greear named and answered seven myths regarding sex abuse that prevent churches from combating it and caring for survivors as they should:

Myth No. 1: “Sexual abuse in the church is not really a problem but simply the latest leftist attack on the church.”

“Survivors and advocates have been calling our attention to this for years,” he said in response to the myth. Believing this myth has caused many to “miscategorize the words of people like Christa Brown, Tiffany Thigpen, Mary DeMuth, and Anne Marie Miller, Dave Pittman, Jules Woodson, Megan Lively and so many other victims as attacks from adversaries instead of warnings from friends.”

Myth No. 2: “Abuse only happens in Catholic or liberal or complementarian or you-fill-in-the-blank churches.”

This myth “is naive: It relegates abuse to an ideological problem, when it should be most properly seen as a depravity problem,” Greear said.

Myth No. 3: “The church is best equipped to handle this internally.”

“Some things … are not only immoral, they are illegal, and criminally so,” he told the audience.

Myth No. 4: “A posture of grace requires giving the benefit of the doubt to those accused and offering the convicted a second chance.”

“Christian teachings on grace and forgiveness never mean covering up sin in ways that expose others to harm,” Greear said. “And someone that has abused another should never be in a position in our churches where they can do it a second time.”

Myth No. 5: “Enduring abuse in marriage is part of learning to love like Jesus.”

“We say, ‘God hates divorce.’ Yes, but God also hates abuse. And we don’t enable one thing God hates to try and prevent another,” he said.

Abusers “can be disarming and downright charming,” Greear said. “And they thrive in environments of naive assumptions and no accountability, where stereotypes, rather than sober thinking, control the day.”

Myth No. 7: “Updating our policies will take care of the problem.”

Updated policies are “essential steps,” but they must be combined in local churches with “changes in attitude and culture,” he said.

Greear encouraged participants to complete the “Caring Well Challenge,” a year-long, joint initiative of the ERLC and the Sexual Abuse Advisory Group that calls churches to become equipped to prevent predatory behavior and to care for survivors.

In comments based on Jesus’ teaching about Himself as the Good Shepherd in John 9:35 to 10:18, Moore urged churches to shepherd God’s people, protecting them against wolves and not abandoning them as hired hands would. 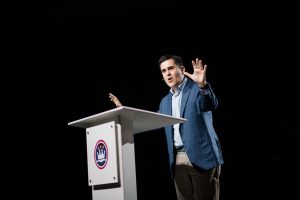 ‘Sexual abuse is awful in any context in any place,’ ERLC President Russell Moore said at the conference. ‘But church sexual abuse adds’ Jesus to the predatory act and trauma, ‘and that is a perversion of the Gospel of Jesus Christ.’ Karen Race Photography

Moore told the audience, “A church that will say, ‘We’re not going to expend a lot of effort on this; we don’t want to get distracted by this,’ is a church that is not acting like a shepherd but like a hired hand.

Churches should neither think they are invulnerable nor think they must act to prevent the outside world from learning about abuse in the congregation, he said.

The main-stage events of the conference, which continues through mid-day Oct. 5, are being live streamed for free at live.erlc.com.