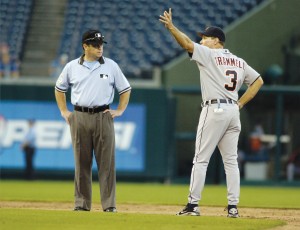 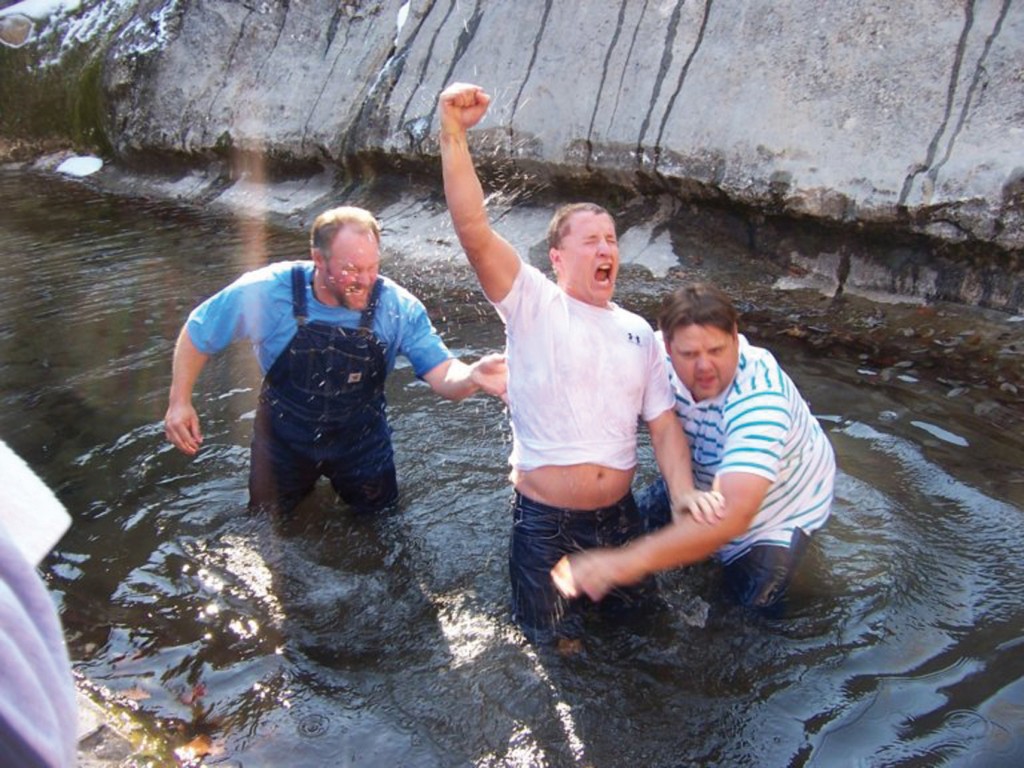 “You’re out!” “Safe!” Both are frequently heard calls in the game of baseball. And there is a group of baseball umpires, who makes those calls, who wants to be sure their fellow arbitrators in the game are not “out” but “safe” in the arms of Jesus.

“Calling for Christ” is an organization of Christian umpires, which actually got its start at Falls Creek Baptist Conference Center.

Major League umpires Ted Barrett and Rob Drake were attending a men’s retreat when they got the idea for a similar kind of retreat for baseball umpires.

“As a believer, who grew up in church, when I got to umpire school, I thought maybe it was someplace I shouldn’t be,” said Barret, who has been a Major League umpire for nine years. “It is a pretty dark world. Umpire school is similar to the military with the tough language, heavy drinking and other things that go along with a group of guys getting together.”

Barrett, who was one of 14 out of 300 in umpire school who got jobs, said as he got to the Minor Leagues, it got worse, and by the time he reached the Major Leagues, he found there was no ability to share his faith without getting ostracized.

“When I made it to the big leagues and started having some influence, I wanted to make a change among the Minor and Major League umpires, but I had no idea how to go about that,” Barrett said.

Then in 2001, Barrett and Drake were introduced to Dean Esskew, an Oklahoma pastor, at a conference in Denver.

They told Esskew what was on their hearts, and he said he would do anything he could to help them.

As the friendship grew, the umpires discovered Esskew had a lot of experience taking youth on retreats, and since they were hoping to do a retreat where Christian umpires could get together, they asked for his advice.

“Dean told us about Falls Creek,” said Barrett. “He said it was holy ground.”

Drake was doing a series of games with the Texas Rangers, and met Esskew at Falls Creek to check out the grounds.

“It was perfect,” said Drake.

So the invitation went out for the first umpires’ retreat, and Barrett said he knew it could be just Esskew, Drake and him, but 12 umpires from across the nation showed up and five of them made professions of faith. The second year, the number in attendance doubled, and the third year, there were 30 umpires. Even in a blizzard last December, 25 came. 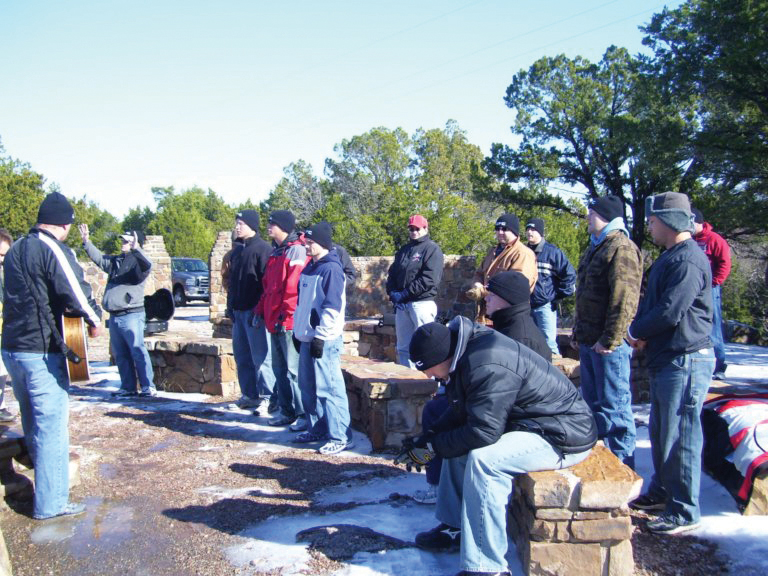 Since that first retreat, Barrett received a degree from Bible college and has been ordained, and Esskew has become the full-time pastor for the organization.

“Whenever the umpires are introduced, Barrett is referred to as Rev. Ted Barrett,” said Esskew. “He is the only Major League umpire who has ever been ordained as a minister.”

Esskew, who most recently served as pastor of New Hope in El Reno, a new church start, said as pastor to umpires, he travels a lot, going to all major and minor league ballparks, does weddings and funerals, attends spring training in both Arizona and Florida, does counseling and leads Bible studies.

Esskew said before “Calling for Christ,” baseball chapel was all there was for Christian players and umpires.

“They do an awesome job, but by the time they minister to both teams, there’s not enough time to minister to the umpires,” he said. “So that’s where the need came from.”

Esskew said he sets up church services wherever he goes. For example, in Boston, there are four or five Minor League parks in addition to Fenway, so Esskew sets a time when all the umpires can be there.

Drake said although the off-season is busy and umpires have been away from home for six months during the season, they are beginning to look forward to the retreat each year.

“You think some of these guys are heathens who wouldn’t be drawn to anything godly,” said Barrett, “and yet Dean is able to interact with them, and the next thing you know, they are showing up at Bible studies.

“It is exciting to see God working among the umpires. We’re trying to take guys who are strong in their faith and tell them they don’t have to be quiet about it. The other side is we’re bringing in guys who probably never would accept the message, and they are starting to get it.”

Barrett said when they started the organization, they were prepared to be laughed at or even ostracized from the umpire fraternity, but that hasn’t happened.

“Even if guys don’t come to the retreat, they offer to help pay for the food,” he said. “We’ve had big league guys give money and even frequent flyer miles.”

Barrett said he even has been asked to pray before union meetings.

“It’s kind of funny because I pray and 10 seconds later, harsh words start flying,” he said. “But it’s become a norm now. Ten years ago, if someone had asked me to pray, they would have been laughed out of the room.”

Eskew said 12 umpires have been saved during the Falls Creek retreats over the past four years. And they have all been baptized at Falls Creek. 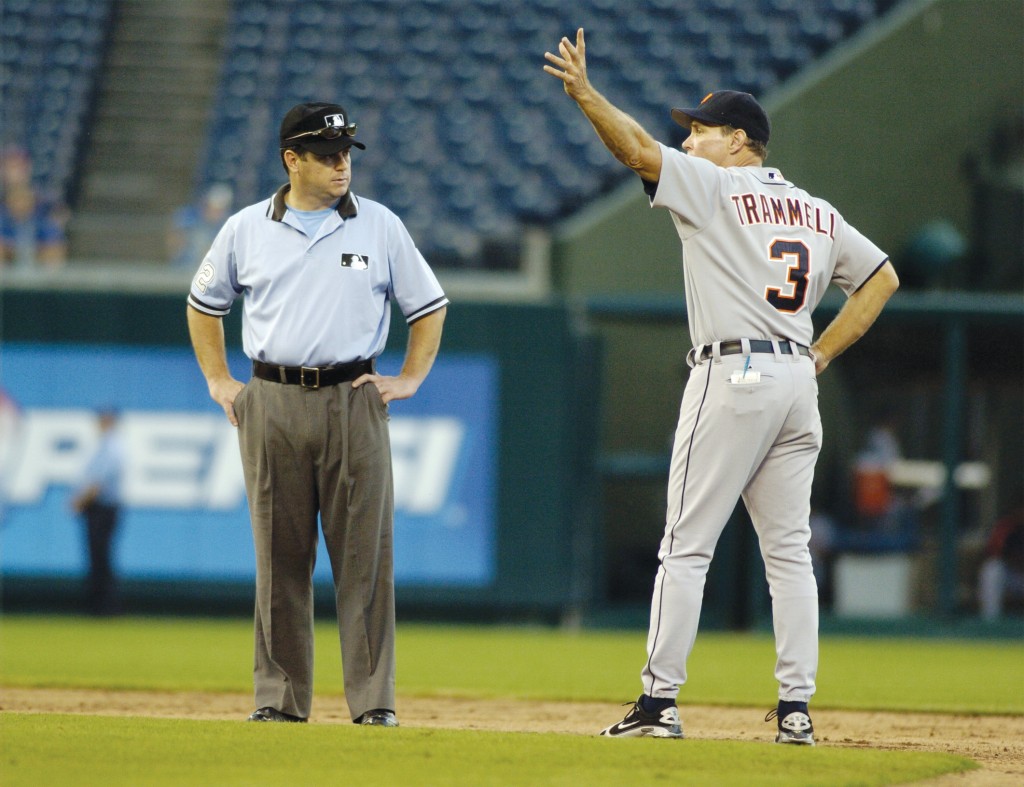 “Last year, during the blizzard, I said, ‘Gentlemen, do you know how cold that water is going to be?” he related. “But they will not wait to get home to be baptized once they are saved.”

Esskew emphasizes that God has put him and the umpires togeher in a unique situation.

“But,” said Esskew as he was driving to the All-Star game in San Francisco, “I’m learning to like it more every day.”