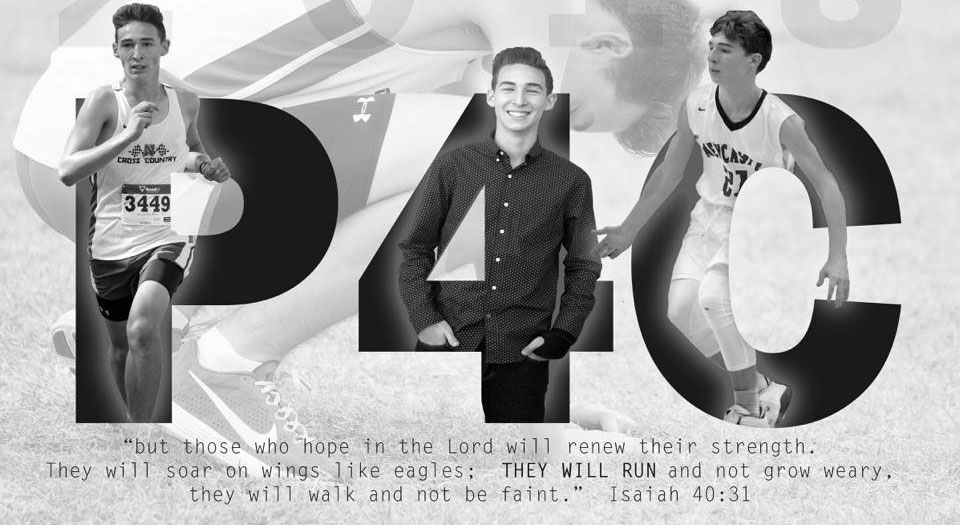 God has moved in miraculous ways since Dec. 19, 2017 when 16-year-old Caleb Freeman and his younger brother Clayton were involved in a serious car wreck. It has been nearly four months, and at the beginning of March, the Freemans rejoiced as Caleb reached significant milestones in his recovery process.

To recap, Clayton Freeman was released from the hospital shortly after the accident. Caleb, however, suffered severe brain injuries that have meant a longer road to recovery for the son of Newcastle, First pastor and his wife, Jeremy and Emily Freeman. 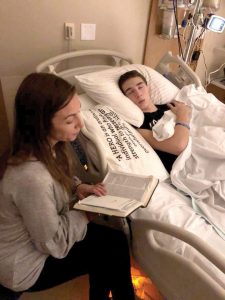 Emily Freeman, Caleb’s mom, reads Scripture to him as he falls asleep. “Caleb loves hearing the Bible read to him,” said his dad, Jeremy.
Photos: Provided

Jeremy and Emily have done well to document the process on a Facebook page that they began for Caleb shortly after the accident called “Pray for Caleb.”

On Jan. 15, Caleb was transported from Oklahoma to Craig Hospital in Colorado to begin aggressive rehabilitation treatment. In the months that Caleb has been at Craig Hospital, the Lord’s healing hands on his life, along with his hard work and gumption, have paid off.

“Finally, in physical therapy, Caleb walked,” Jeremy said in a Facebook post. “It has been 11 weeks since he had taken a step and today (March 7), he took a bunch. He didn’t just walk a little, he walked a lot. It was so awesome to see.”

Caleb’s progression has not slowed down since his first steps at the beginning of March. The following day, March 8, Caleb had his first real meal. The meal consisted of pureed flank steak, beets, pineapples and juice. After each bite he would quickly say “more,” which was music to his speech therapist’s ears.

His verbal skills continue to improve over time, which has led to him asking for things like cheesecake, one of his favorite desserts, and certain people.

“For 11 weeks I have been waiting to talk and communicate with him and now he’s coming awake. His speech is unbelievable,” Jeremy said.

Jeremy said Caleb began to make jokes and laugh for the first time on March 13, which shows that his cognitive development skills are improving as well.

On March 14 Caleb was given the “OK” to move to a soft foods diet, which led to Jeremy and Emily buying that cheesecake Caleb kept mentioning. “Swallowing requires brain and vocal strength, so the fact that he’s moving along so quickly is great,” Jeremy said.

Caleb’s siblings—Brittany, Clayton, Aubrey, Luke and Addi have been able to join their family in Colorado thanks in part to their school allowing them to complete their work from afar. This has been paramount in Caleb’s recovery.

Jeremy explained, “It’s so important for Caleb to be with them because he asks for them all of the time, and if they were not around I think he would be very lonely and discouraged. So the fact that they have been here has not only been good for them, but it’s been good for Caleb.” 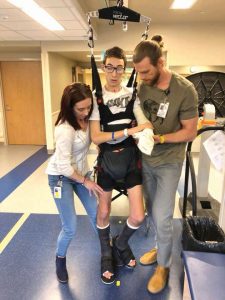 Caleb walks for the first time in 11 weeks.

What is most encouraging and “mind-blowing,” perhaps is news that the Freemans received most recently in a meeting with Caleb’s doctors.

“We were so encouraged to hear each person on our team talk about how Caleb has exceeded expectations and how amazed they are at his quick progress. They are extending his discharge date until May because they fully expect him to eat, talk and walk his way out of here! BUT GOD,” said Freeman in a Facebook post to the “Pray for Caleb” page.

“#ButGod” is a social media hashtag that has been associated closely with Caleb’s rapid recovery that seems to have no other explanation than, “but God.”

Throughout the process of Caleb’s recovery, Newcastle, First has been a large part of the Freeman’s story. “I look forward to the day when I can stand before them and just thank them because they have enabled me to be with my son. What other job in the world would give you that freedom to be there as a part of your son’s recovery?” Jeremy asked.

“I’ll never be able to say thank you enough to them for that. They’re praying around the clock, every hour of the night someone is praying, it’s unbelievable.”

Newcastle, First, along with the community will host a 5K run in Caleb’s honor on Sun., April 22 called the “P4C 5K.” The run can be completed in Newcastle or virtually with the help of technology, allowing runners across the globe to join Caleb’s recovery efforts. The goal is to have 1,000 participants.

To register for the P4C 5K visit, www.signmeup.com/P4C5K.

While the Freemans rejoice in the recovery of their son to this point—they ask that people would continue to pray for Caleb to get stronger, keep eating, for his vision to improve and to pray that “minds would be blown and that God would move so mightily that everyone watching would believe and trust in Him.”