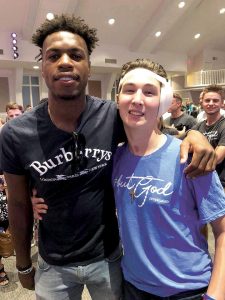 NEWCASTLE—Caleb Freeman has returned home. News spread throughout the Oklahoma City area and beyond when the son of Newcastle, First’s pastor Jeremy Freeman made his Aug. 26 appearance in his home church.

Caleb experienced an acute brain injury from a December 2017 car accident in Norman. The Baptist Messenger, as well as other news outlets and especially social media, reported updates on his condition, which included stops at the University of Oklahoma Medical Center, Craig Hospital in Colorado and Quality Living Incorporated, a post-hospital residential rehabilitation center, in Omaha, Neb.

“Caleb, 16, made his way steadily as his parents walked closely behind him, their arms outstretched to give him support, when needed,” Oklahoman reporter Carla Hinton wrote about Caleb’s return to Newcastle, First. “Once the teen had walked to a front row of seats, he stood next to his mother, Emily, who hugged him as they joined the crowd in singing…”

Local news stations, including KFOR-4 and KOCO-5, featured video coverage of Caleb and his family, walking into the sanctuary. A livestream feed on the “Pray for Caleb” Facebook page was available for a global audience throughout the Sunday service.

Jeremy led a question-and-answer session with Caleb. They both sat in front of the congregation, wearing matching T-shirts that featured the message “But God,” which the Freemans consistently share when explaining Caleb’s progress since the life-threatening accident.

Caleb begins his walk into the sanctuary at Newcastle, First, with his family supporting him. [Photo: Facebook.com]

“I think this is important to say: Caleb is not going to be a miracle. He already is a miracle,” Jeremy said to the applauding congregation, beginning his Q&A session with Caleb.

“The teen showed his sense of humor through the conversation, causing churchgoers to laugh more than once,” Hinton continued. “He said he realized that he wouldn’t be alive without ‘God protecting me,’ and he plans to let others know about the Lord’s goodness.”
Caleb shared how much he appreciated his family supporting him through his recovery journey.
“The only reason I’m still standing here is because God protected me in the wreck,” Caleb said. Many news sources reported Caleb’s praise.
Caleb shared his goals, which include running again, “probably pretty soon.” Caleb earned numerous medals as a cross-country runner at Newcastle High School. He also played basketball.
Another goal Caleb has for himself: “I want to travel around the country and tell my story.”
People wondered how Caleb remained patient and endured the last nine months of rehabilitation to regain his skills. He said the answer is easy.
“I’m thankful because I wouldn’t be as close as I am to Jesus,” he said. “I was walking away from Him, and then the wreck happened. He used a bad thing as a good thing.”
Since the Aug. 26 worship service, the “Pray for Caleb” Facebook page continued to give updates, including a more recent Sunday experience at Newcastle, First.
“Today was our first ‘normal’ Sunday back at church. It was a fantastic day!” Jeremy posted on Sept. 2. “I most love looking out while I’m preaching and seeing Caleb sitting in worship…singing, listening and even shouting an occasional amen (yes, he did that today).”
Jeremy also submitted a list of prayer requests for Caleb, which includes: “healing of the ataxia, perfection of balance and coordination; perfection of speech; perfect and complete healing of Caleb’s brain.”
Caleb’s journey to full recovery continues. The Baptist Messenger will be offering updates in future editions. The “Pray for Caleb” Facebook page continues to provide frequent reports at www.facebook.com/prayforcalebfreeman.