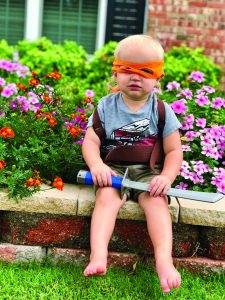 When my wife and I go to the grocery store, she doesn’t like me to shadow her. She knows I will throw non-list items into her cart that she deems unnecessary. “We don’t need these cookies; we have plenty at home,” she will say.

“But we don’t have any like these,” I argue. “I have never tried the lavender dark chocolate chip kind.”

Then we begin to negotiate. “When you finish the picante dark chocolate chip cookies you bought last week, I will pick some of these up on my next go-round.”

And I hang my head. You can’t argue when someone is right.

To get me out of her hair while she is shopping, she often asks me to get her an item or two from the other side of the store. Most of the time, she sends me to look for a birthday card for a cousin, a get-well card for an aunt and thank-you cards for several other people. After 42 years of marriage, she knows something about me:

1) This task will keep me busy and out of her hair for a while, and 2) When I look at these cards, I think I could come up with at least three other noteworthy sayings for them.

The first card I picked up was a get-well card. On the outside was a picture of an out-of-focus rose, and written in fancy lettering across the front was the phrase “I have been praying for you.” When you opened it, the inside said, “Get well soon.”

Now, that is a nice card, but I would have written it differently. I would have left the outside the same “I have been praying for you,” but on the inside, I would have written “…that you would leave me something in your will.” Or “…but God hasn’t answered a prayer of mine since 1969.” Or “…that your surgeon wasn’t the one who graduated in the top half of the bottom third of his class.”

See, I told you I could come up with three more. Some of you would say those are not perfect get-well cards, but sometimes, the imperfect is perfect. If I were sick, any one of those three unexpected sayings would cheer me up and bring a smile to my face. Sometimes we take life too seriously.

I have posted many photos on my Facebook page along with what I thought was a funny tagline. The other day, I posted one of 2-year-old Cohen the Goodhearted sitting on the ledge beside Grammy’s flowerbed. In the photo, he is wearing an orange Ninja turtle mask with a sword in his hand, a Ninja Turtle shell strapped to his back and Grammy’s beautiful flowers in the background. Everything was perfect, but his mask was skewed. Under the picture, I wrote “Ninja Lesson #3—Learning to blend in with your surroundings.”

Several people pointed out to me that his mask was crooked and suggested that I should have taken the time to straighten it. What they don’t understand is that the crookedness of the mask is what makes this the perfect picture. You can find thousands of pictures of children with a perfect placed mask, but one like this will steal your heart.

Did you know it is in our imperfections that God makes us whole? Remember the story of Jacob in the Bible? He wrestled with God all night and wouldn’t give up. So God touched his thigh and caused his hip to become disjointed. Even with a limp, Jacob continued to wrestle God and wouldn’t let go until he got a blessing (Gen. 32:22-32). God didn’t heal him of his limp, but with the limp came God’s blessing.

Do you have a limp? It is part of God’s design; it is the place where He can enter your life. Every struggle, every disappointment, every weakness, every imperfection is an opportunity for God the perfect to touch our imperfection. He doesn’t remove the limp but turns it into a blessing instead. The Apostle Paul reminds us of what God says, “My grace is sufficient for you, for My power is made perfect in weakness” (2 Cor. 12:9). Then he goes on and says, “That is why for Christ’s sake, I delight in weakness, in insults, in hardships, in persecutions, in difficulties. For when I am weak, then I am strong” (2 Cor. 12:10).

In the imperfect, we are perfected. Maybe I should make a card that conveys this idea. On the front, it would say: “Don’t trust a person who doesn’t have a limp.” And on the inside “…because they don’t have a place for God to bless them.”