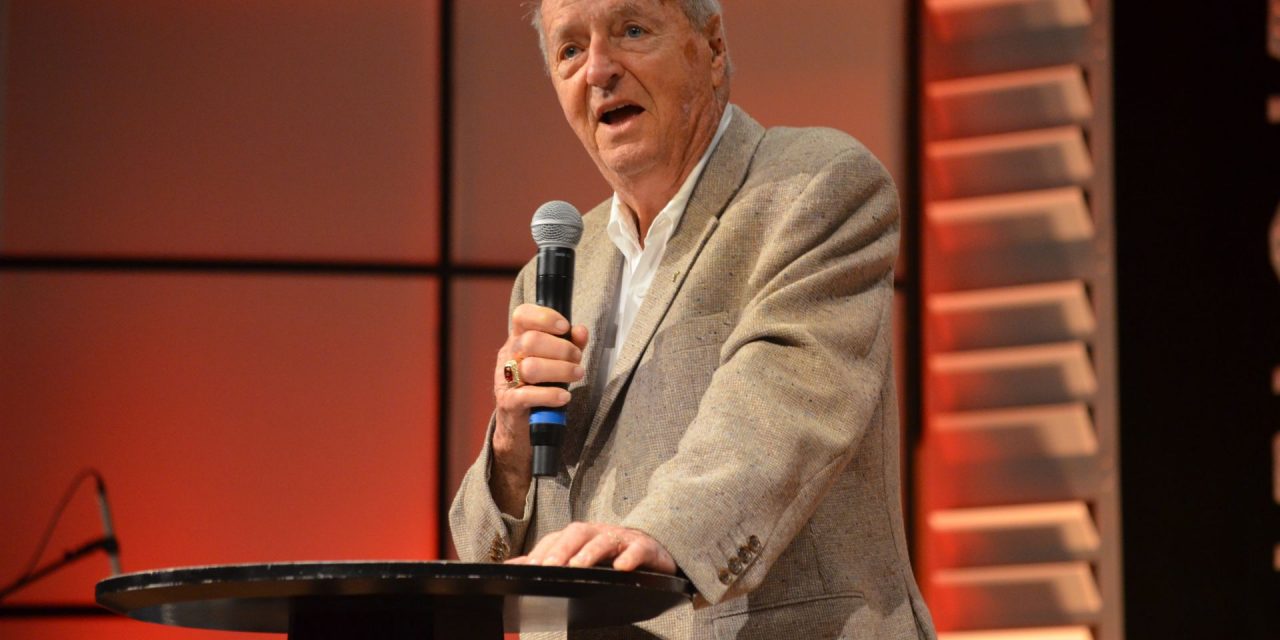 TALLAHASSEE, Fla. (BP) – Clint Purvis walked the sidelines with Bobby Bowden for 21 years and was his friend for 33. In that time, he witnessed a sporting legend grow as Bowden became one of the winningest college football coaches in history, claiming two national championships and an era of success few programs have experienced.

But for Purvis, longtime chaplain for the FSU football team, those accolades only begin to tell the impact left by Bowden, who died Sunday, Aug. 8. 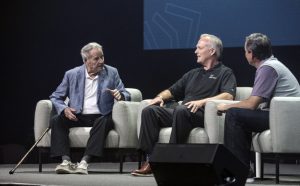 “He was anointed and had God’s favor,” Purvis told Baptist Press on Aug. 9. “Tallahassee isn’t exactly like the Bible Belt. Coach was able to present the message of Christ in such a way that even those who didn’t want anything to do with God respected him. He was one of the most competitive men I knew and wanted to win, but he wanted every player who came to this place to know Jesus and that He could make a difference in their life.”

In July, Bowden announced that he had been diagnosed with a terminal medical condition that his son, Terry, recently disclosed to reporters was pancreatic cancer.

“I’ve always tried to serve God’s purpose for my life, on and off the field, and I am prepared for what is to come,” the 91-year-old Bowden said in a statement July 21. “My wife Ann and our family have been life’s greatest blessing. I am at peace.”

A month earlier Bowden had made his last public appearance at the North American Mission Board’s (NAMB) Send Luncheon, surprising friend and fellow coach Mark Richt. As a head coach at the University of Georgia and University of Miami, Richt’s testimony had become as regarded as his skill in winning football games. Now as Send Relief’s national spokesperson, Richt was asked by NAMB President Kevin Ezell to recount his testimony and Bowden’s influence when Richt was an assistant coach at Florida State.

“If Coach Bowden were here today, what would you say to him?” Ezell asked. Before Richt could finish his answer, Ezell motioned to Bowden, sitting in a chair positioned behind Richt, for the reunion.

“Prayers for Ann and the Bowden family!” Richt posted to Twitter yesterday. “Much love and respect and thankfulness for Coach’s influence in my life!!”

A native of Birmingham, Ala., Bowden was a star athlete at Woodlawn High School who dreamed of being a quarterback at the University of Alabama. He accomplished that goal, but after one semester in Tuscaloosa moved back to Birmingham to marry his high school girlfriend, Ann Estock, and transfer to Howard University.

Bowden played at Howard, later to become Samford University, but it would also become his first football coaching job when he took an assistant position there. He moved on to be the head football, baseball and basketball coach at South Georgia College before moving back to Howard as head coach, compiling a 31-6 record. An assistant coaching position at Florida State followed before Bowden moved to become an assistant coach at West Virginia.

In 1968, WVU’s in-state rival, Marshall University, made a strong push for Bowden to be its next head coach. Bowden thought about it, but declined. He eventually would become West Virginia’s head coach. In his first year, the plane transporting Marshall’s football team and coaches home from a game crashed, killing everyone on board.

“I’ve thought about that a lot over the years,” he said. “That could have easily been me coaching that team, and I’d have been wiped out just like all the others… There were a lot of people I knew on that plane. A lot of good people.”

Bowden became the head coach in Tallahassee in 1976, when the Seminoles had won four games over the previous three seasons. Florida State went 5-6 in Bowden’s first year, but it would be his only losing record at the school. Success came so quick that into the ‘80s, head-coaching offers came from LSU, Auburn and Alabama. The Crimson Tide actually had two opportunities to hire Bowden, passing on him the first time for Bill Curry. In 1990 it was Bowden’s chance to say ‘no thanks,’ and Alabama hired Gene Stallings.

By that time, Bowden was 60 years old, and he considered Florida State “his school.” Time had become a factor, and instances like the Marshall plane crash had given Bowden a perspective on eternity that became intertwined with his coaching philosophy.

The 1986 death of lineman Pablo Lopez led Bowden to present the Gospel to his team the next morning, a stand that led Richt to faith in Christ. Hours after Bowden’s death, Purvis posted to Facebook a handwritten letter from Bowden to his children that he wrote after a car accident took the life of his grandson and son-in-law the week of the 2000 Miami game. The letter explained that though they mourned at the moment, their faith continued to be in Jesus.

“(T)his is why my LOVE & RESPECT for COACH BOWDEN runs DEEP!!! And why I miss this man so much now!!!” Purvis wrote.

Bowden was a member of Tallahassee, Fla., First for 43 years before joining Bradfordville, Fla., First, another area church, in May 2019. Bowden’s high profile opened up opportunities to witness, but he was strategic about it, Purvis said, who prayed with Bowden a week before he died.

“He was very good at doing it in such a way that it didn’t offend others,” he said. “If those of other faiths respected him as a man, they’d respect his message. You have to earn the right to be heard and he earned the right to present the message.”

But the truth is that in the world of big-time college football, the right to be heard doesn’t come without winning. In the early ‘90s, stacked FSU teams had heartbreaking back-to-back losses to in-state rival Miami when each year a wide-right field goal in the final seconds dashed the Noles’ championship hopes.

Not even the team chaplain was safe from ridicule, as people told Purvis he hadn’t prayed hard enough for those footballs to curve left. He’s fairly certain they weren’t kidding.

“Any loss was tough on Coach, but at the same time he saw the big picture and knew that anything he did was sovereign under the Lordship of Jesus Christ,” Purvis said. “God’s will was bigger than his wishes.”

In 1993, Florida State finally celebrated its first football national championship. For Bowden, the weight of winning the big one had finally lifted. FSU’s success would continue throughout the decade, which would end with another national title after the 1999 season.

Under Bowden, the FSU team would attend church every Sunday, in keeping with a promise the coach made to parents in living rooms across America while on the recruiting trail. Those of other faiths or who didn’t want their son to attend were not compelled to do so, but the overwhelming majority were thankful, Purvis said.

That became part of Bowden’s legacy as well. Many of his players didn’t come from Christian backgrounds or have a Christian witness. They grew up around drugs and gangs. Those influences and decisions often followed them to Tallahassee. When it came to administering discipline, Bowden relied on his Christian faith.

“He always said he treated his players the way he would want someone to treat his own children. He didn’t see them as just a number or position. He saw beyond the uniform they wore to the people they are.” 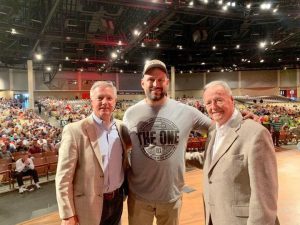 Coach Bowen and his son, Tommy, were among the list of speakers during the 2019 Rewired Men’s Conference at Falls Creek.

“Sad to hear the passing of Coach Bobby Bowden but what an amazing example he lived,” wrote Bubba Burcham on Facebook. Burcham serves as Rewired program director and men’s ministries consultant for Oklahoma Baptist. “He coached me in the Hula Bowl a long time ago and had a major influence on me getting into coaching. I am thankful for the leader he was. He was a kingdom minded coach that impacted so many through his years.”

The following is a passage from the article in Baptist Messenger’s May 16, 2019 edition, reporting on the Rewired Conference.

The father-son coaching duo Bobby Bowden and Tommy Bowden were the final speakers at Men’s Rewired. During the last main session on Saturday, April 27, Tommy, former Clemson University football coach, introduced his father, sharing how they faced each other nine times, during Bobby’s 34-year tenure as the head coach at Florida State University.

Jokingly, Tommy described his matchups against his father’s squad. “When we played as two Christian, godly coaches, these games were cold-blooded, knock-down, drag-out,” he said. “There were late hits, illegal hits, cussing, trash-talking—I was very disappointed he couldn’t handle his team any better than that.” Many in attendance roared with laughter as Tommy spoke.

He also shared funny stories on the recruiting trail, as Tommy and his dad recruited the same players. But he also shared how important it is to be godly men today.

“Men, you’re about the last line of defense,” he said. “We need to draw a line in the sand, not be ashamed and not be embarrassed. We will be held accountable for the opportunities that we have here on earth.”

Before introducing his father, Tommy gave a final challenge with a Gospel plea.

“My father is coming out to share more, but whether you are someone who needs to give your life to Christ or a Christian whose life has become stale, he will challenge you,” he said.

Bobby was greeted with a standing ovation throughout the tabernacle, and he opened with a friendly yet humble remark.

“They love me in Oklahoma. It’s the only team I could never beat,” the elder Bowden said. “I keep getting invited back here. I wonder why.”

At 89 years old, Bobby had many stories to share, which had everyone’s attention and received numerous responses of laughter. He also gave a raving endorsement of Falls Creek.

“I’m so glad I got invited to come here,” he said. “I can’t believe this place. Every state in the union needs something like this. I don’t know if they can ever build it, but this place is amazing.”

He also knew who was to receive the credit for the building of Falls Creek. “It’s no doubt in my mind that God is in control here,” he said. “If I had one wish I could make right now, you know what I would wish? That every man in this room would accept Christ as his Savior.”

Bobby continued to share great stories, as well as his testimony and how he would share his faith with players he coached. He concluded with sharing how it’s never too late for anyone to make a profession of faith in Christ.

“It’s never too late,” Bobby pleaded. “I don’t care how bad you have been, you can still be saved.”