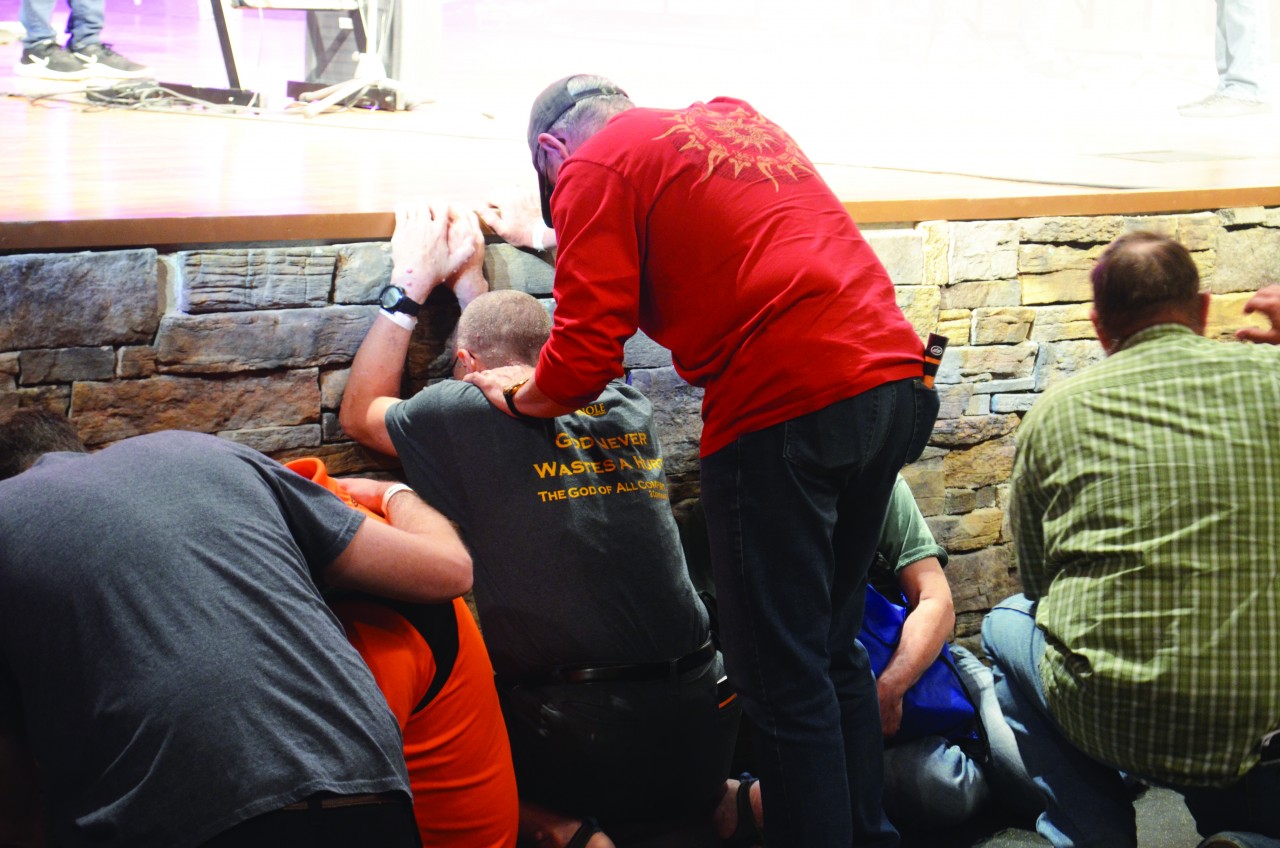 DAVIS—Beautiful weather, multiple fellowship opportunities, quality studies during breakout sessions, powerful worship sessions and many activities that men enjoy were on the schedule of the 2019 Men’s Rewired, April 26-27, at Falls Creek Baptist Conference Center in Davis. 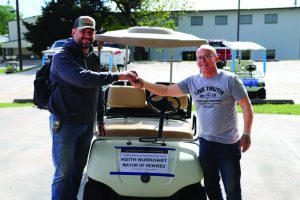 Bubba Burcham, left, gave much credit to Keith Burkhart, right, for the success of the Men’s Rewired Conference.

An attendance of 2,001 men gathered for the annual state men’s conference that had as its theme “The One.” Bubba Burcham, men’s ministry consultant for the Baptist General Convention of Oklahoma, served as Men’s Rewired program director and was encouraged with the results of Men’s Rewired.

“The heart of Rewired is the men’s lives changed by the Gospel, lived out in the local church,” Burcham said. “I am one of those men. This year, we focused on ‘The One,’ which is based on Col. 1:15-23, as we want to see men follow the One Lord wholeheartedly. We want to see men going from the sidelines into the game, from the pew to the arena, and that was demonstrated at Rewired this year.

“There were men who gave their lives to Christ,” he continued, “men who rededicated their lives, who wanted to be better fathers and husbands. That’s why Rewired is such a great experience for men—to get away with other godly men and do business with God.”

Burcham credited Keith Burkhart, who started Men’s Rewired years ago, as well as the many volunteers who help every year, for making this year’s event a success. He said Burkhart, who is currently the pastor of Del City, First Southern, made the conference a “well-oiled machine. I’m just trying not to mess it up.”

The father-son coaching duo Bobby Bowden and Tommy Bowden were the final speakers at Men’s Rewired. During the last main session on Saturday, April 27, Tommy, former Clemson University football coach, introduced his father, sharing how they faced each other nine times, during Bobby’s 34-year tenure as the head coach at Florida State University.

Jokingly, Tommy described his matchups against his father’s squad. “When we played as two Christian, godly coaches, these games were cold-blooded, knock-down, drag-out,” he said. “There were late hits, illegal hits, cussing, trash-talking—I was very disappointed he couldn’t handle his team any better than that.” Many in attendance roared with laughter as Tommy spoke. 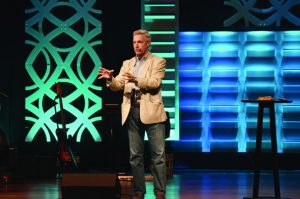 He also shared funny stories on the recruiting trail, as Tommy and his dad recruited the same players. But he also shared how important it is to be godly men today.

“Men, you’re about the last line of defense,” he said. “We need to draw a line in the sand, not be ashamed and not be embarrassed. We will be held accountable for the opportunities that we have here on earth.”

Before introducing his father, Tommy gave a final challenge with a Gospel plea.

“My father is coming out to share more, but whether you are someone who needs to give your life to Christ or a Christian whose life has become stale, he will challenge you,” he said.
Bobby was greeted with a standing ovation throughout the tabernacle, and he opened with a friendly yet humble remark.

“They love me in Oklahoma. It’s the only team I could never beat,” the elder Bowden said. “I keep getting invited back here. I wonder why.”

At 89 years old, Bobby had many stories to share, which had everyone’s attention and received numerous responses of laughter. He also gave a raving endorsement of Falls Creek.

“I’m so glad I got invited to come here,” he said. “I can’t believe this place. Every state in the union needs something like this. I don’t know if they can ever build it, but this place is amazing.”
He also knew who was to receive the credit for the building of Falls Creek. “It’s no doubt in my mind that God is in control here,” he said. “If I had one wish I could make right now, you know what I would wish? That every man in this room would accept Christ as his Savior.” 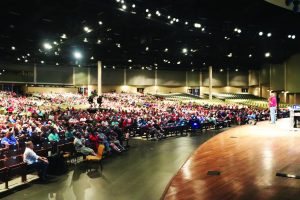 Bobby continued to share great stories, as well as his testimony and how he would share his faith with players he coached. He concluded with sharing how it’s never too late for anyone to make a profession of faith in Christ.

“It’s never too late,” Bobby pleaded. “I don’t care how bad you have been, you can still be saved.” 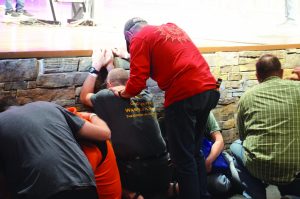 Tommie Harris, former University of Oklahoma football standout and NFL Pro Bowl defensive lineman, was the featured speaker for the Friday evening, April 26, main session. Harris shared his confidence he has in God that “He will never leave me nor forsake me,” and his assurance was increased after a tragedy in his life.

Harris shared that his wife Ashley died during surgery. Harris retired after playing eight years in the NFL because of Ashley’s death.

“Ever since that day, I’ve been relying on the power of Jesus,” he said and shared how God could change other lives too. Many made public decisions of faith after Harris spoke.

Burton challenges men to live out their faith

Evangelist David Burton was the featured speaker in the Friday afternoon session, and his presentation was interactive. He called on men in different stages and roles to stand at different points while he was speaking. 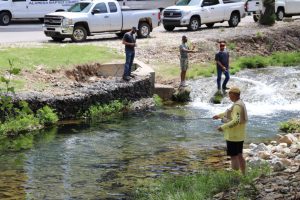 Burton called on college students to stand and shared how they could demonstrate their faith at school. He called on pastors to stand and challenged them to lead in their churches.

He concluded with a Gospel plea to those who were living like Christians but have not made a profession of faith in Christ. “There’s not a thing in your life that Jesus didn’t die for,” Burton said.

An offering total of $50,578.10 was collected during Men’s Rewired and the Oklahoma Baptist Women’s Spring Retreat, April 12-13. The offering will support Ministry Safe training, a resource that proactively helps prevent child sexual abuse in the church through training and background checks. Money collected at the women’s retreat totaled $32,721.14, and Men’s Rewired gave $17,856.96.

“I am blown away by the offering from the men and women’s retreats,” Burcham said. “To see them come together to make such a significant difference in the local church is encouraging.”
To learn more visit menrewired.com.