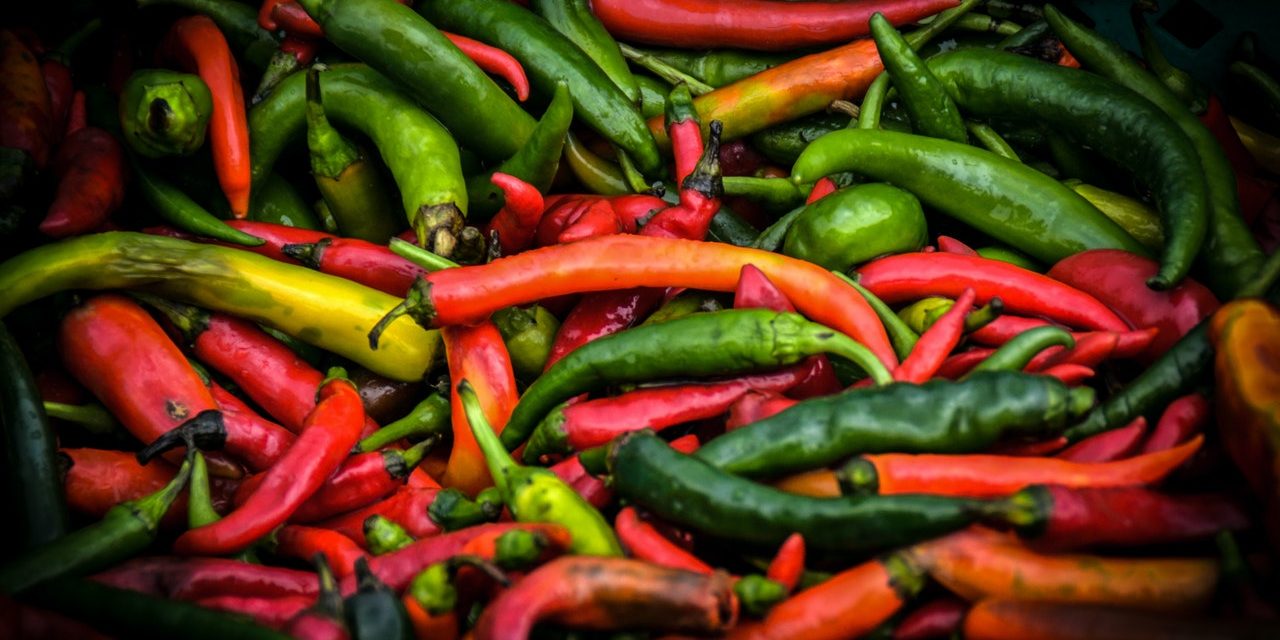 One of the easiest things to grow in Oklahoma is peppers. Since there are thousands of varieties, most everyone can find at least one or two that they enjoy eating and cooking with. They don’t take up too much space in your garden, and they are heat-loving plants. They do well in raised beds and containers and add color and interest. They are heavy producers, easily justifying the real estate they occupy.

If you are looking to grow common varieties of peppers then you will most likely find them in the springtime at any local garden center or nursery. However, if you wish to venture out into the big, wide world of peppers then you will enjoy shopping for seeds and starting some of your own. One of my favorite websites to look at for peppers is Pepper Joe’s .  I also enjoy shopping at Baker’s Creek Seeds because they offer heirloom varieties that I can save the seeds from and plant again in the future.

Peppers are known for their heat, and when left to ripen on the vine, they are at their hottest. However, there are several varieties that rate very low on the Scoville Scale, including the bell pepper, and can even be enjoyed by children.

Peppers need to be planted 18 to 24 inches apart in rich, well-drained soil. They require full sun which means they need six to eight hours per day. Peppers are somewhat heavy feeders, so make sure your soil is made up of quality compost. They require regular watering, but old-timers say that if you starve them for water they will be hotter. I’m not sure if that’s true or not, but it’s an interesting wives’ tale.

I don’t know why it took me so long to figure this out, but did you know that when peppers are fresh, their name is one thing, but when they mature and are dried their name changes?  For example, when fresh, our favorite pepper to use in salsa is called a Jalapeno, but when that same pepper turns red and is dried it is known as a Chipotle chile. Once a fresh Poblano pepper is dried, it becomes known as an Ancho chile, and the common Anaheim pepper when dried becomes known as the Colorado chile.

As I was thinking about this conversion process, it made me think about the times in the Bible when God changed someone’s name. Abram became Abraham, Saul became Paul, Simon became Peter. As they were transformed from their lost and fallen states to become redeemed, followers of God, He changed their names. They got a new start—a new beginning. Now He could use them in all new ways for His glory.

In Revelation 2:17 we read, “The one who has an ear, let him hear what the Spirit says to the churches. To the one who overcomes, I will give some of the hidden manna, and I will give him a white stone, and a new name written on the stone which no one knows except the one who receives it.” Just think, one day in Heaven, God is going to give a gift, a white stone to each person who “overcomes.” On that stone, their new name will be written. It will be a special name that only that person and God will know. Wow!

This summer, as you are working in your garden and tending to your peppers, stop and think about how neat it is that both people and peppers get a new name! Pray and ask God to help you be one of the “overcomers” then wait with excitement to see what your new name in Heaven will be. God is all about gifts and new beginnings, and He uses the most common things, like peppers, to remind us of that.

Photo by DXT_91 from Pexels