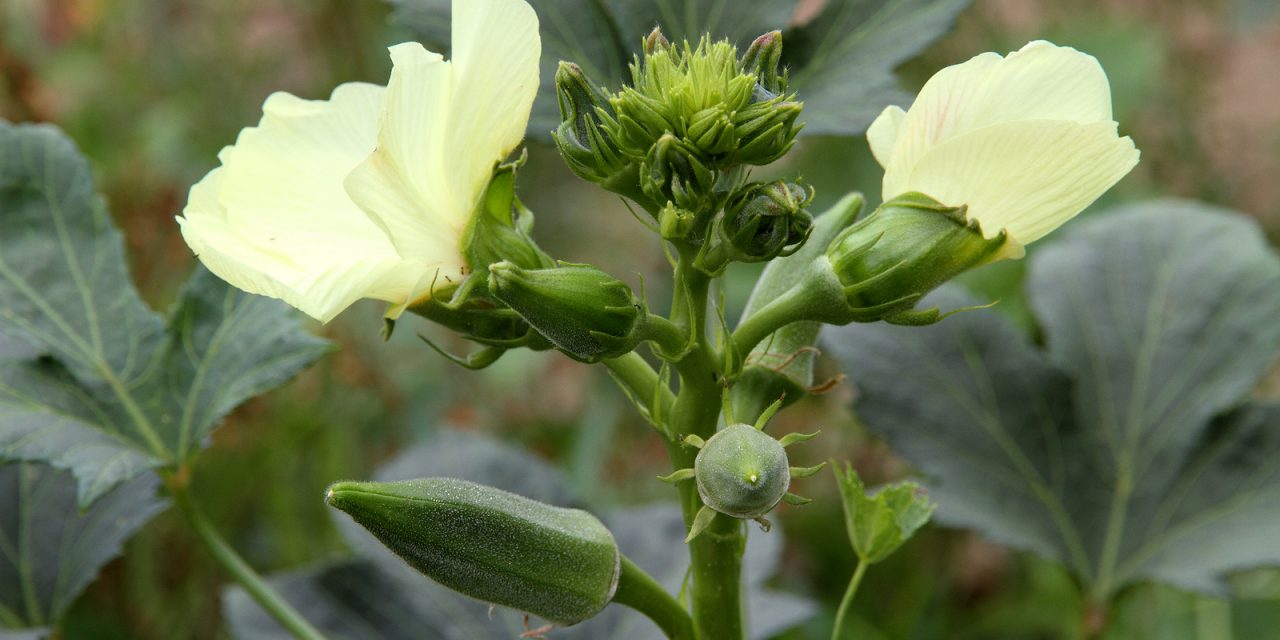 Okra is one of those foods that people either love or hate. There doesn’t seem to be much middle ground. Being from Oklahoma and having a palette for Southern cooking, I love okra—prepared all the ways!

Botanically known as Abelmoschus esculentus, to us it’s simply “okra”. This common garden plant is part of the Malvaceae (mallow) family and is kin to hollyhock, cotton and hibiscus. If you look closely at the beautiful flowers that an okra plant produces you will easily see the connection. While there will always be fun debates regarding if certain foods are fruits or vegetables, given that okra pods develop from the flower of the plant and contain seeds, by definition it is a fruit.

In central Oklahoma (Zone 7), as well as in most regions, this heat-loving, hardy plant is grown as an annual, but the species is actually a perennial when grown in dry, tropical regions where it is native. It is not cold tolerant, and frost is definitely its nemesis.

Okra is best started by direct seeding, loves full sun and sandy-loam soil that is slightly acidic-to-neutral (pH 6.5-7.5) and drains well. The amount of space that you will need to designate for your okra crop depends upon which variety that you choose to grow.

One of the most well-known is the Clemson Spineless. This All-America Selections winner in 1939, was introduced to the world by Clemson University. To date, it is still the most popular open-pollinated variety of okra on the market. Clemson Spineless produces vigorous plants that grow to be three-to-five feet tall and are exceptionally uniform in stature. It produces green, ribbed and spineless pods that are ready to be harvested when they are three inches long. You can order seeds here.

There are other varieties that are interesting, delicious and just plain fun to grow.  Three of my favorites are:

There are many ways in which people eat okra. In the south, the most popular are fried, in gumbo or stews and pickled. Other ways include oven-roasted, sautéed, fermented and the easiest of all – raw, right off the plant. We love raw okra! We simply snap a pod directly off of the plant and eat it while standing there.

For my oldest daughter and others who take pride in being the keeper-of-odd-knowledge, according to Mark Murphy of the University of Tennessee Extension office, “During the Civil War, the Union blockade made coffee scarce in the South. This led to experimentation with various substitutes for coffee, including persimmon seeds and chicory. One such substitute that gained considerable support was okra. In December 1861, The Tennessee Baptist newspaper wrote, ‘We have been somewhat skeptical about the various substitutes that have been proposed for coffee. We have tried the okra coffee, and had we not known it to be okra, we should have supposed it the best of Laguyra or Java. It has all the rich spicy aroma of the genuine article…’

“To brew your own okra coffee, allow the pods grow to maturity or save some that have simply grown too large and woody for fresh eating. Allow time for the pods and seeds to get dry. The pods will become brown and brittle and you may hear the seeds rattle inside when shaken. Remove the seeds and toast them in a skillet on medium heat. Stir frequently for about 10 to 15 minutes. You want to parch the seeds, but don’t burn them. Some of the seeds may pop. Allow the seeds to cool and then grind them. Note that the okra seeds will be brittle and will grind faster than coffee beans. Brew (in the same manner as standard coffee) and enjoy!”

On top of being able to imitate coffee, okra is a mucilage packed full of vitamins, antioxidants and soluble fiber. Isn’t our God awesome? Out of wisdom, provision and love, He created for us so many amazing plants.