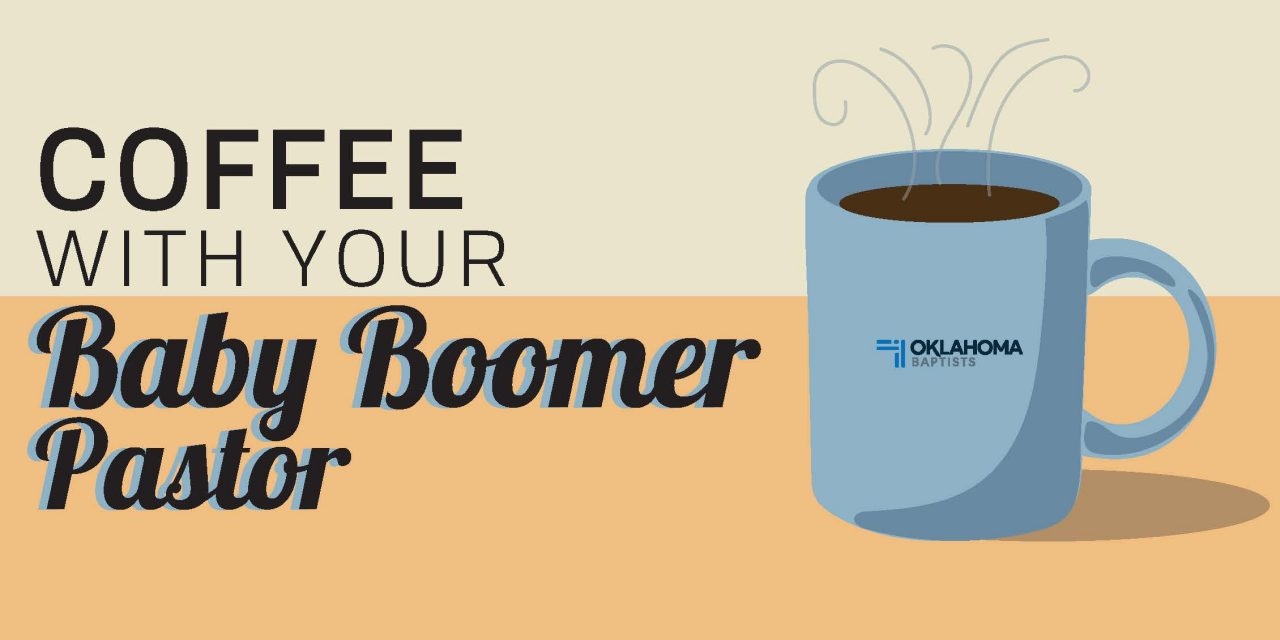 (As Oklahoma Baptists we have adopted the mission statement: We encourage one another to advance the Gospel. In this series of blog posts I hope to help you appreciate the point of view of your pastor and give you some ideas for how to encourage him—over a piping hot cup of coffee!)

So you want to encourage your Baby Boomer pastor? Your Boomer pastor will probably be more focused on encouraging you. That’s great! But try your best to encourage him. He’s got a lot on his plate. After all, there is no pastoral manual on how to lead a congregation during a worldwide pandemic. Your pastor is a person who also is dealing with Coronavirus stress while trying to grow in his faith, maintain his health and relationships—all while struggling with finances and all the other stresses happening all around us.

Baby Boomer pastors were born between the years 1946-1964. About 47 percent of Oklahoma Baptists pastors are Boomers, so there is almost a 50/50 chance that your pastor is a Boomer. You don’t have to ask to see an ID. When the oldest of your pastor’s generation were 25, the first Starbucks opened at the Pike Place Market in Seattle, Washington. So you know your pastor is probably down for a cup of Java! But don’t be surprised if he’s drinking from a cup with the Oklahoma Baptists logo on it—that’s totally Boomer!

Not all Baby Boomers are the same. But like all generations, a common history during their development shaped the Boomer personality, and these experiences have given them a fairly common outlook. The Baby Boomer is called that because they were born during a huge boom of births that came after the end of WWII. So think of all the history that happened since 1946. The world has change a lot since that time, and the Boomers have had a front row seat!

A brief profile of the Baby Boomer outlook:

If you are going to have coffee with your Baby Boomer pastor, it might be good to know a little background about his generational outlook. Who knows, maybe you will find common grounds with him? (I know, that’s a bad pun! #DadJoke)

Here is a little bit about the Boomer Generation that might make good coffee talk starters:

Personal spiritual development. Boomers love to work on themselves. Baby Boomers are insatiable learners who are constantly on a quest of personal development. Historically they have tended to pursue their growth using programs, many of which have videos, books and seminars. Chances are high your pastor will be able to recommend a good book or Bible study to help you grow spiritually. If you show interest, his face will probably light up.

Youthfulness. Here is the worst kept secret of all time. No matter how old your Boomer pastor is, he still thinks he has a youthful outlook. Boomers don’t want to be kids forever, but they do want to stay young by intensely questioning established ways and bringing the youthful sentiment of looking at things with fresh eyes. If you are younger than your pastor, he’ll probably thinks you think he’s pretty cool for having coffee with you.

Achievement. Boomers are driven, hardworking and tend to think a person needs to pay his or her dues to get to the top. Position is the result of creative action, hard work and dedication. Your Boomer pastor probably knows a lot about how to navigate the complex relationship systems at your work or school. He’ll love to talk to you about that.

Give a little face time. The generation that gave us “Woodstock” loves conferences and large gatherings. These are places where Boomers thrive because they like to mingle with others and form relationships. With all this COVID-19 stuff, your Boomer pastor probably feels isolated right now. It’s likely that, when he’s talking to you, he considers it networking.

Consensus building is important to Boomers. They value egalitarian leadership. They prefer to work on problems in teams and task force groups. Give them a place to meet regularly and a team of competent people and they feel they can change the world. Don’t be surprised if your Boomer pastor wants to recruit you to do something bigger, it’s his love language.

Technology. The Boomer generation shaped the world with technology innovations in just about every area of learning, especially in physical science, sociology, psychology and technology. They invented the personal computer, the internet, satellite networks, etc. Most of America’s technical engineers are Baby Boomers. It’s probable that your Boomer pastor loves technical gadgets, but because tech is always changing, he hasn’t had the time to keep up. If you want to talk tech, be ready to give him a how-to demonstration—he’ll be eating out of your hands.

Entertainment. As the first generation that was raised on TV, Boomers grew up watching Father Knows Best and Leave it to Beaver, but they also were among the first to stand in line to watch the first Star Wars film—oh, wait is it now called fourth episode? Can’t we all get along?

Been there, done that. The argument could be made that the Boomers are the makers of the Southern Baptist Convention (SBC). As children, Baby Boomers were enrolled in SBC churches during something called the “Million More in ‘54” campaign. The sheer size of their numbers forced the SBC to adapt to them with developments such as age-graded Sunday School, church busing, Vacation Bible School and full-time children’s ministers.  As youth, the SBC experienced explosive growth in church-based youth ministry, youth camps, youth musicals, etc. SBC campus ministries like Baptist Collegiate Ministries (formerly Baptist Student Union) were at their height at the time Boomers of the SBC were in college.  Many Boomers became believers during the “Jesus Movement” of the 1970s.  We might not have all these ministries if it were not for the Boomers! As they entered the ministry, Boomers reshaped the landscape of the SBC, creating new expressions of church with contemporary music, mega-churches, and Para-church organizations.  Your pastor likely has literally seen it all and gotten the t-shirt. Ask him for a little bit of a history lesson. He’ll have a lot of cool experiences and insights.

Retirement? What’s that? Your Boomer pastor is probably thinking about his retirement. Beginning now through 2030 we will see a shift of church leadership from the predominance of the Baby Boomer generation (people born 1946-1964) to the younger Generation X (born 1965-1980) and the Millennials (born 1981-1996). Your pastor is praying for the future of your church.  As your pastor retires, he won’t quit working (He may not be able to afford to do it anyway). He will likely reinvent himself and start a new ministry adventure. He’s thinking about legacy right now. Explore that with him. He’s probably wondering how to set you in the right direction ministry-wise. It’s highly likely he knows how too. Helping you would encourage him!

I hope I have given you a few ideas for how to relate with and encourage your pastor.