CHARLOTTE, N.C. (BP) — Set in a revival tent at the foot of a 40-foot glass cross, Billy Graham’s funeral was punctuated by the same theme that characterized his 80-year ministry: a call to trust Christ as Lord and Savior.

“If this were your funeral,” said the late evangelist’s son Franklin Graham, “would you be in Heaven? Are you sure?”

Delivering the funeral sermon to a crowd of some 2,300 invited guests — including President Trump and Vice President Pence — Franklin Graham said today (March 2) at the Billy Graham Library in Charlotte, N.C., “If you’re not sure, there would be no better time than at Billy Graham’s funeral to settle this once and for all.” 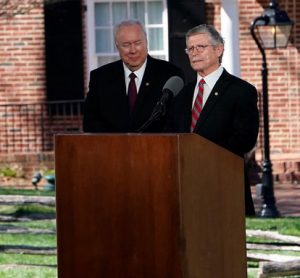 Billy Graham, who preached in person to more than 210 million people, died Feb. 21 at age 99. His funeral capped more than a week of memorial activities, including lying in honor in the U.S. Capitol Rotunda Feb. 28-March 1. The funeral service featured tributes from Graham’s five children, music by Christian recording artists Michael W. Smith and the Gaither Vocal Band among others and an ethnically diverse array of speakers from across the world.

Graham’s pastor, Don Wilton of First Baptist Church in Spartanburg, S.C., said in giving the invocation, “Mr. Graham had a profound and deeply spiritual conviction concerning the Word of God, the Bible. He loved the Bible. It governed how he lived, and it governed how he died. He believed the Bible teaches us the truth about God and Christ Jesus.”

Billy Kim, Graham’s translator during a 1973 crusade in Seoul, South Korea, was among speakers representing the international scope of Graham’s evangelistic ministry. Kim recalled the last time he saw Graham. He said the aging evangelist, whose eyesight and hearing were failing, told him tongue in cheek, “Let’s have one more crusade in Korea.”

At “the church I pastored” during the Seoul crusade, “attendance was a mere 300,” Kim, a former Baptist World Alliance president, said to Graham’s casket. “Now, after your crusade, there were more than 20,000 members. The rapid growth of the megachurch movement in Korea had started … all because you came to preach the Word to our people.”

Tributes from Graham’s children included recollections from his daughter Anne Graham Lotz about her father’s practice of gathering everyone in his home for family devotions, even into his final days on earth. Graham’s daughter Ruth Graham told how her father hugged her following a difficult divorce and greeted her with the words “welcome home.”

“There was no shame,” Ruth Graham said. “There was no blame. There was no condemnation, just unconditional love. And you know, my father was not God. But he showed me what God is like that day. When we come to God with our sin, our brokenness, our failure, our pain and our hurt, God says ‘welcome home,’ and that invitation is open for you.”

Graham’s children also spoke of his love for his wife Ruth, who died in 2007. His sister Jean Ford, the evangelist’s only living sibling, said Billy Graham’s death reminded her of the song lyric “Heaven came down.”

“The last few years, he became rather quiet,” said Franklin Graham, president of the Billy Graham Evangelistic Association. “This last year of his life, he said very little at all, and I believe that his mind was on Heaven.”

Franklin Graham also noted “a few things that my father would want me to share with you today,” including explanations of the Gospel and that the Bible is “the infallible Word of God.”

“The world, with all of its political correctness, would want you to believe that there are many roads to God,” Franklin Graham said. “It’s just not true.

“… My father would want me to share this with you today, that God sent His Son, His only Son from Heaven to this earth to take our sins,” Franklin Graham said. “And He took our sins to the cross, and He died in our place. He shed His blood for each and every one of you.”

Franklin Graham added, “He’ll come into each and every heart that invites Him. And if we’ll repent of our sins and by faith believe on the name of the Lord Jesus Christ, the Bible says we will be saved.”

“Daddy,” Franklin Graham concluded, “I won’t see you on this earth again. But I will see you again.”

Billy Graham’s funeral was followed by a private burial on the grounds of the Graham Library next to his wife. His grave marker, according to media reports, is inscribed with John 14:6, “Jesus answered, ‘I am the way, the truth, and the life. No one comes to the Father except through Me.'”