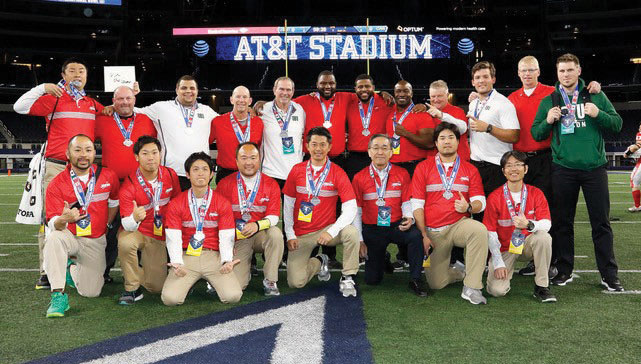 DALLAS—Though not many people know it, American football is growing fast around the world, and in January, the Oklahoma Baptist University (OBU) football team was able to be a part of a major international football event. Members of the OBU coaching staff, including Head Coach Chris Jensen, coached the Japanese team to victory in the annual International Bowl, in Dallas, Texas. 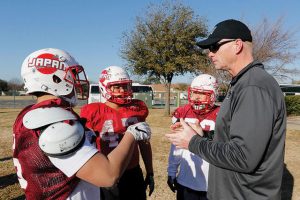 The International Federation of American Football (IFAF) partners with USA Football to increase popularity of the sport worldwide, as well as teach safety to lower levels of football in America and abroad. Through the IFAF, American football is successfully drawing the attention of international athletes.

According to IFAF, about 70 countries contain a federation dedicated solely to the sport. The International Bowl is the IFAF’s main event on American soul and is designed as an opportunity for national federation teams to come to America, play stiffer competition and experience a brighter spotlight.

This year, the event featured teams from Canada, Japan, Mexico, the United States and the Nordic Nations. OBU was tasked, due to the connections that some coaches made last year, to coach the Japanese team, as well as to work with the Japanese coaches and introduce them to new techniques.

The coaching staff has been involved with USA Football for years, running various camps and participating in events across the country. The program gives the Bison a great recruiting opportunity, allowing them to see young talent at an early stage—and also for that young talent to get familiar with OBU.

Despite the name, the International Bowl isn’t just one game; it’s a series of practices, scrimmages, meetings and walkthroughs, culminating in 12 different games at AT&T Stadium, the home of the Dallas Cowboys. The Bison coaching staff didn’t take it easy, working hard in limited time to install a new game plan that they wanted to run. “We threw a lot at them,” Melot said.

Installing that game plan may have been the most challenging part of the experience for the coaching staff, given that only a handful of people on the Japanese team spoke English well enough to communicate. “Only three people in their whole program could speak English,” Jensen said, noting how quickly he discovered that limited progress could be made through film study and team meetings. Walkthroughs were key.

“A lot of it was just showing them,” Melot said, “physically moving guys, showing them where to go.”

“Words can translate,” Jensen noted. “But the meaning of those words doesn’t always translate well. There are things that any American who’s played football will immediately understand what you’re talking about. That wasn’t necessarily true here.”

All three coaches, however, were impressed by the way the players handled the practice environment. Not only was the Japanese team dealing with a new playbook, but they also faced the challenge of a depleted roster—only about 40 kids. “Depth was one of our concerns throughout the week,” Jensen said, “especially when we were scrimmaging.”

All of the coaches noted the resiliency and determination of the Japanese players. They picked up concepts quickly, knew the techniques and worked hard. Above all, though, the coaches noted the ability of the team to acknowledge mistakes and learn from them. “I never heard a single excuse,” Melot said. “It was pretty remarkable.”

Though there was some hesitation from the Japanese coaches—who treated the International Bowl as a clinic where they could learn new techniques—about the unfamiliar concepts that the OBU coaching staff was installing, the game plan proved effective. The Japanese team won their game, 21-6, bouncing back from a blowout loss the year before.

“After the game, I think they realized the reason why we were doing some of the things that we were doing,” Jensen said. In fact, the Japanese team has requested OBU return next year to coach.

Any time that a Christian university is involved with an organization from another country, there’s an opportunity for evangelism. While the coaches were careful not to overstep any boundaries that may have existed, they were mindful of the impact they were having on the young men.

“It was the way that we lived our lives in front of them,” Jensen said. “Praying before we ate, not using profanity… it was an indirect testimony. That’s different for us. Coming from (OBU), we’re expected to share our testimony, but this was a different environment.”

Gothard noted how this first time coaching was mostly about building relationships, in order to open up doors in the future to share the Good News.

The International Bowl is designed to be an event, an experience—and not just for the players. Coaching a game in AT&T Stadium is an experience in itself, and the game yielded unique opportunities for the entire coaching staff.

Melot was able to serve as the defensive play caller for the first time in his career, something he hopes to continue in the future. Coaching cross-culturally, while challenging, proved very rewarding for the Bison. And perhaps more than anything, they came out of the event with a new joy for coaching the sport that they love.

“So many times, we’re coaching football, playing football… do we love it?” Gothard asked. “These kids, they love American football.”

The coaches agree on one thing in particular: the fast pace that they adopted over the week of the International Bowl can translate to Bison Hill. “We put in a lot in three practices; we pushed the pace, and these kids met it,” Melot said.  “So we’re going to do the same thing here.”

And hopefully, the Bison’s upcoming season will contain the same level of success that the Japanese team enjoyed in the International Bowl.