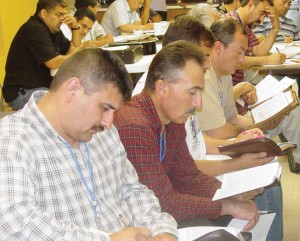 The growth rate in Oklahoma Baptist churches comes from the ethnic population, and one-third of that growth is in Hispanic congregations. Last year, there were 17 Hispanic churches started, and the year before, there were 20.

“Presently, that is 6 percent of the population of our state, and it is going to grow to 25-30 percent,” said Randy Adams, Baptist General Convention of Oklahoma Church Outreach Team leader. “As the Hispanic population grows, there is going to be a larger population base which needs to be reached with the Gospel. We must constantly reevaluate how we do this as the education level and language change.”

The Web site, www.hispanictips.com, reports that nearly 43 percent of Idaho Hispanics are under the age of 19, information helpful to Oklahoma churches considering ministering alongside their Utah/Idaho counterparts through the ongoing partnership between the two state conventions. That same Web site reported that by 2014, the Hispanic workforce is expected to reach 25.8 million. Corporate America is apparently paying attention to those trends; for example, McDonald’s was the seventh largest Hispanic advertiser in 2006, spending more than $81.1 million on Hispanic media, up from $70 million in 2005, the Web site said.

“The greatest impediment to starting churches is trained leaders to lead them,” Adams said. “The best way to get leaders is to train our own, and the Robert Haskins School of Leadership and Golden Gate Seminary Extension help with this, and this is the preferred way.”

The other way, he said, is to bring them in from Spanish-speaking countries. However, this sometimes creates problems, because many times, they decide to return to their homeland, and the church where they served dies.

“Also,” Adams said, “we have to realize Hispanics aren’t just Mexicans, and there are significant differences among Spanish-speaking groups. We may need more than one church in an area because of these cultural differences.”

Jim Brunk, BGCO church planting strategist, recently trained Sunday School lay planters in Guerrero, Mexico in how to use an indirect Bible study method to start churches.He said that method is being used in the Association of Baptist Hispanics in Oklahoma, which is divided into four quadrants of the state plus the Panhandle and central section.

“We are challenging them to have 100 CoNNextion Bible studies,” Brunk said.

Right now in the state, there are only seven full-time pastors of Hispanic congregations who are supported by their churches. Many Hispanic pastors serve two or more churches.

“When you look at the materials, there’s just not much out there for Spanish-speaking Sunday Schools,” Mayfield said. “We realized there is a need that needs to be met, and so we got to work translating PowerUp into Spanish.”

PowerUp is a Sunday School growth strategy that spans seven consecutive Sundays. It includes training and equipping to help churches increase their Sunday School attendance. All of the materials in the PowerUp kit will be translated into Spanish, except for a DVD in which Mayfield appears. The DVD will contain Spanish subtitles.

Carlos Moreno, Hispanic Mission Pastor at Altus, First, has been doing the bulk of the translating, along with BGCO church planting staffers Daniel Caceras and Antonio Conchos.

“On March 1, we will hand the materials off to our communications team to be produced,” Mayfield said. On March 10, some churches from our Hispanic fellowships are bringing their age-graded Sunday School teams to Oklahoma City, Exchange Ave., and we’ll introduce PowerUp to them.”

Mayfield said each of the seven Hispanic fellowships should have a trained team by June 1.

“We’ll also have all the translated materials ready for distribution by then,” he said.

“It used to be that people came to America to become Americans,” said Adams. “But now many want to maintain their cultural identity, and there is no attempt on their part to learn English because they don’t have to.”

Brunk agrees. “America used to be a melting pot,” he commented. “But today it is a pot with dividers.”

Adams said as the second-generation of Hispanics emerges, it will be more educated and more English-speaking.

“A lot of Hispanic people want their children to learn English,” he concluded. “Hispanics usually come to this country with a lower level of education, but they want more for their children, who are going to become our professional and business leaders. If we don’t reach the first generation of Hispanics, we have less chance to reach the second generation.”

Adams noted Southern Baptists are the most ethnically diverse denomination in America.

“But we have to incorporate Hispanics into the mainstream of Baptist life in Oklahoma,” he asserted. “As they reach the mark of 30 percent of the population, we won’t have the influence we have today.”