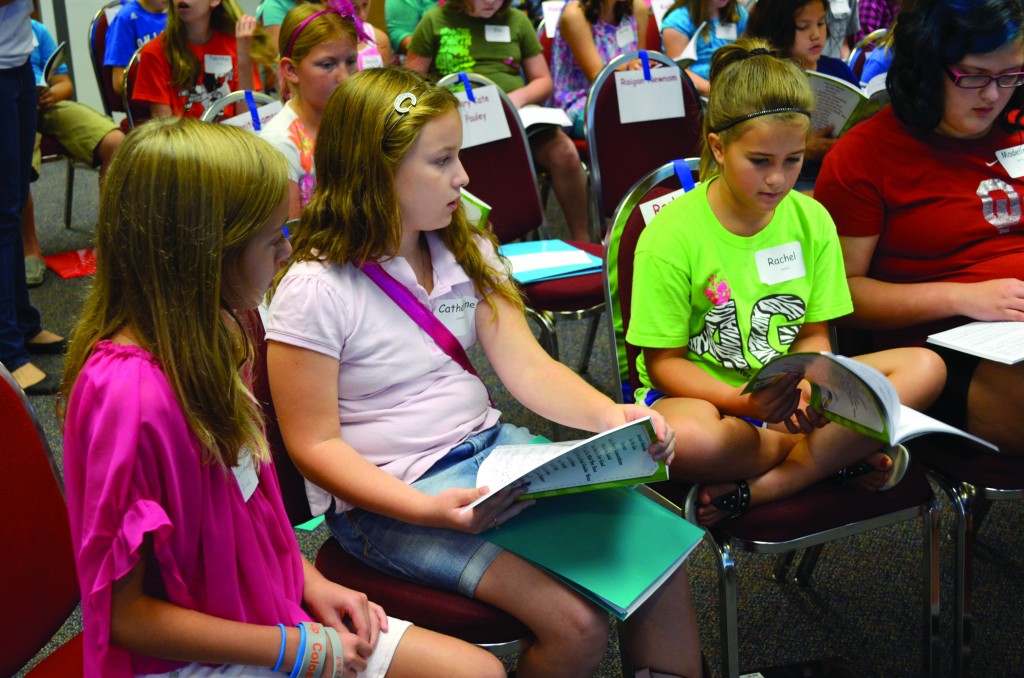 Young singers from virtually every area of Oklahoma gathered for a four-hour retreat at the Baptist Building in Oklahoma City Sept. 14 to officially launch the first season of the Oklahoma Baptist Children’s Chorus (OBCC).

More than 80 of them convened in the Tanner Chapel to help fulfill the vision of Baptist General Convention of Oklahoma (BGCO) Worship and Music Specialist Randy Lind.

“This is a group who’s going to reach out to students and people all over the state of Oklahoma,” Lind said. “How exciting it will be to hear a new generation of musicians sing and develop their voices of praise and worship.”

“Wynn Anne is a very experienced children’s chorus director, and Rebecca and Morgan are incredibly talented,” Lind said. “These three ladies are going to love the students, direct them in a wonderful way and lead them to love our Lord.

“I am honored and delighted to be asked to be a part of the OBCC, and I want to thank Randy for his vision to have a group for our children in our state,” Hook said. “Children love music; it’s just a part of their lives, and so with joy, we’re going to bring the children together to sing. We’re going to learn about music, we’re going to play games and have fun, but our desire is that we’ll instill the Word of God in their hearts forever.”

Hook said she has been excited about the new undertaking.

“It’s been great starting at the ground floor with this,” she exclaimed, crediting Lind’s vision. “We formed a committee, first, to talk about it, and then Randy came and asked me if I would direct it. He then asked the associate directors to get involved.

“The Lord has absolutely laid His hands on this project and guided the whole process. He has opened doors, and we have been so excited to see what He is going to do in the lives of these young singers.” 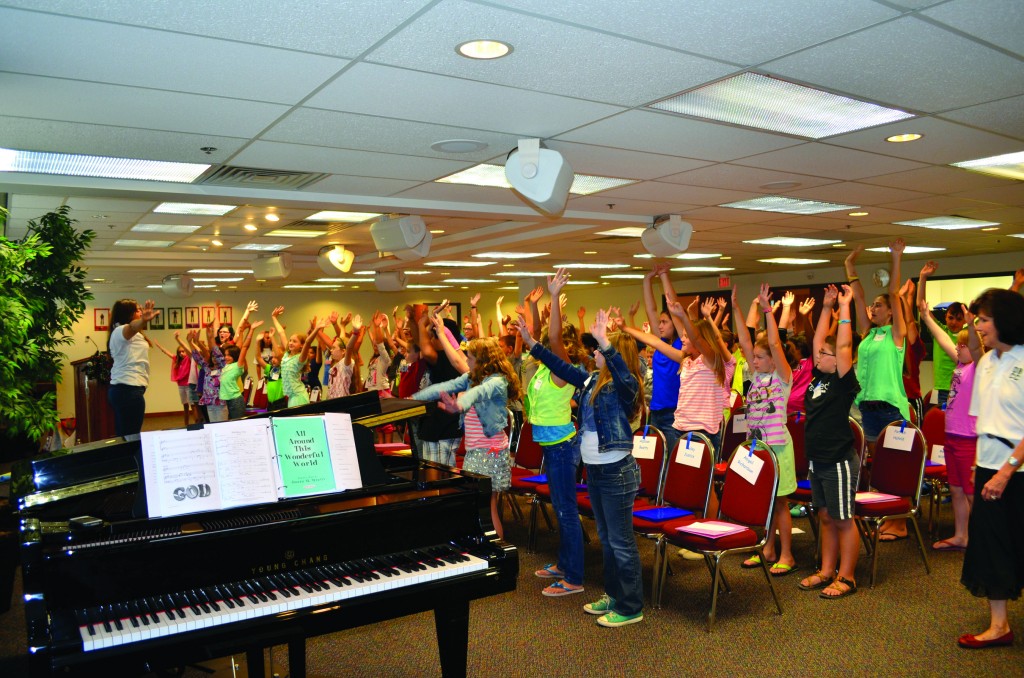 Almost seven dozen children in grades 4-6, ages 9-12 eventually were selected for the OBCC. Some are outgoing; some still a bit shy.

Hook said. “Some are used to singing, some are not, but they just wanted to be a part of this choir. They love music, and I think it shows, too, that they support the music programs of Oklahoma Baptists.”

As mentioned, they come from all over the Sooner State: Tahlequah, Cherokee,  Leedy, Mooreland, Davis and Lawton,  basically from all every corner of the state,” Hook said. “There was no letter of recommendation required; they just had to come to one of the auditions in either June or July and try out.”

While other children’s choruses already exist, Hook pointed to the OBCC’s “uniqueness.”

“I think the greatest joy of this is that there are other auditioned children’s choruses, even in the city area, that are very fine, but what we can do is sing and share our faith, and that’s the main goal for us. It’s to instill the Word of God in their hearts through music and then also teach them that music is a gift from the Lord, and as we prepare these songs, we are preparing an offering back to Him, and so as we sing, we just pray that the message will reach those hearing the songs.”

As Hook so eloquently reminded the young singers as their retreat began Sept. 14, their voices are “an instrument” which can be used to glorify God.

“The purest sound on Earth is a child’s voice . . . and putting them together is a beautiful thing; blending them,” she said. “Trying to get them to sing musically together and watching their faces was precious as we worked together that day. By the end of the day they were all so excited.” 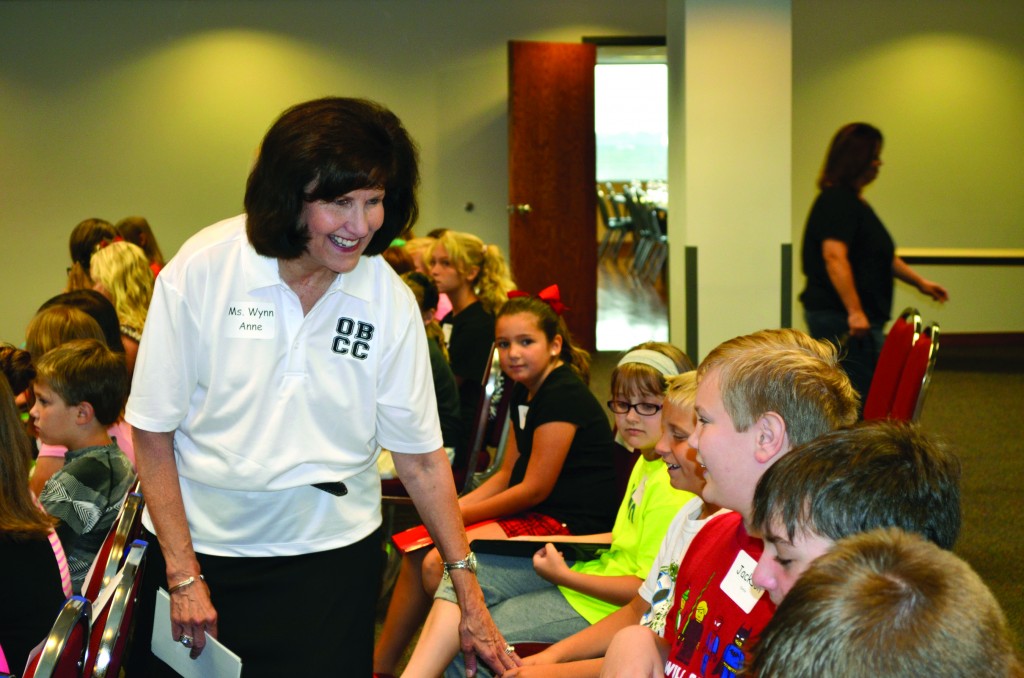 Hook personally greets the chorus members prior to the beginning of their retreat.

The OBCC’s theme Scripture this year is Matt. 5:16, and the leaders are teaching the children to be the light of the world.

“Several of our songs revolve around helping them to think about being the light of the world and at the same time, presenting the Gospel to them, too,” Hook said.

The OBCC will sing at several events during its first season, including their first concert at 3 p.m., Nov. 17 at Edmond, Waterloo Rd.; at Rose Day, Feb. 5, 2014 at the Oklahoma State Capitol; Feb. 27, 2014 prior to the Singing ChurchWomen of Oklahoma Concert at Harrah, First; and at 3 p.m., April 27 at Putnam City High School.