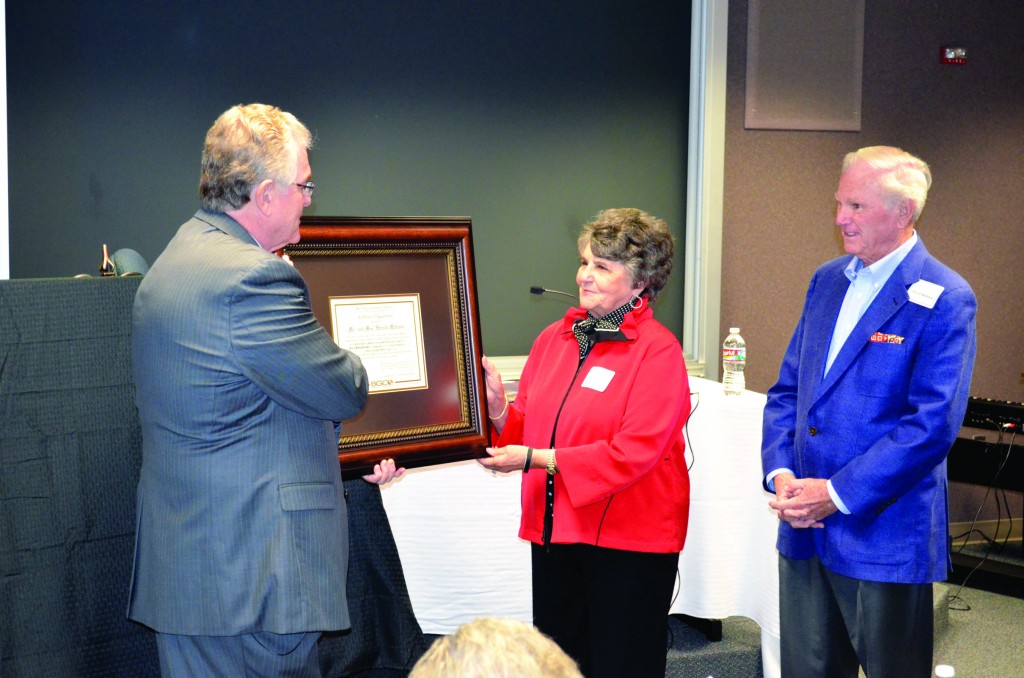 Anthony L. Jordan presents a plaque to Patricia and Harold Mathena on behalf of the BGCO Board of Directors in appreciation of their $7 million gift to Falls Creek.

The Baptist General Convention of Oklahoma (BGCO) Board of Directors approved a $26.5 million Cooperative Program Allocation and Financial Plan for 2014, the formation of a 13-member Hispanic Strategic Planning Task Force and gave the go-ahead for construction projects at Falls Creek Baptist Conference Center and CrossTimbers Children’s Mission Adventure Camp during its Sept. 24 meeting at the Baptist Building in Oklahoma City.

The Board also recognized Harold and Patricia Mathena of Oklahoma City for their generous gift of $7 million for the construction of an events/dining center at Falls Creek, which will be named the Mathena Family Events Center.

“On behalf of Oklahoma Baptists and this Board, how much we appreciate your generosity and your love for Christ.  Thank you for your generosity in helping the Kingdom’s work move forward at Falls Creek,” Jordan told the Mathenas during a special presentation.

The Hispanic task force will be appointed by BGCO President Nick Garland, pastor of Broken Arrow, First. It will be charged with the task of developing a strategic plan for the future maturity and growth of Hispanic work through the BGCO.

The Board also gave approval to the construction of a Welcome Center at Falls Creek and later passed a motion naming the structure after BGCO Executive Director-Treasurer Anthony L. Jordan. Plans also were approved to build a 50-room lodge, made possible by a gift by the Rick Thompson family, which will be completed in conjunction with the Events Center and Welcome Center. A combined total project for these Falls Creek projects is $12 million. Currently, $10.5 million of that cost has been pledged or already gifted, with $1.5 million remaining to be raised from donors. The Board also approved hiring Wynn Construction Co. as the contractor for the projects.

Jordan also pointed out that $2.99 million in debt remains on the Falls Creek Tabernacle, and said the BGCO hopes to be debt free on the Tabernacle by Falls Creek’s 100th Anniversary in 2017. He reminded Board members about the Save-a-Seat program by which donors can honor a person or entity by naming a seat in their honor for $500. There are enough seats remaining to raise $1.3 million through the Save-A-Seat program.

Construction of a new, $135,000 caretaker’s residence/registration office at CrossTimbers was also approved, as was a zip line across Baptist Lake at Falls Creek—at an approximate cost of $450,000, with the funds to be taken from the Watson Trust.

In other action, the Board approved adjustments to the salary administration plan, with those adjustments mainly affecting Baptist Collegiate Ministries, which have undergone a reorganization.

Jordan, is his report, lauded the herculean efforts of BGCO disaster relief volunteers, who have responded virtually without rest since last October. Now under the leadership of director Sam Porter, Oklahoma disaster relief celebrates its 40th anniversary this year, and will be recognized at the BGCO Annual Meeting Nov. 11-12 in Broken Arrow.

“There are many things we as Baptists do, and I am very proud of them and thankful for them, but I would tell you that there’s not much that we do that has more impact in the lives of people, ultimately meeting needs in their lives and sharing the Gospel of Jesus Christ, opening doors to people who would never listen to us at any other time than through disaster relief. And we have the privilege to bring many of them to faith in Jesus Christ as a result.”