BGCO Board meets at Falls Creek 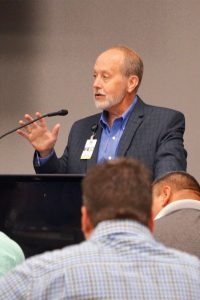 DAVIS—Members of the Board of Directors of the Baptist General Convention of Oklahoma (BGCO) met at Falls Creek Baptist Conference Center Sept. 10-11 for their final board meeting of 2018. Many board meeting reports shared success involving Oklahoma Baptists this year, as well as some elements of preparation for 2019.

Falls Creek reported more than 59,000 registered participants attended the eight summer youth weeks, which is the highest attendance recorded in the encampment’s history. The Falls Creek program staff recorded 2,173 professions of faith in Christ and 5,008 overall spiritual decisions were made during the eight weeks of youth camp.

Chris Fields, pastor of Clinton, First and chairman of the BGCO Equipping Committee, reported Falls Creek will have new camper safety policies beginning in 2019, which will be communicated to churches in the near future.

In his comments to the board, Hance Dilbeck, BGCO executive director-treasurer, said Oklahoma Baptists have “our work cut out for us” not only in 2019 but in future years. He announced the 2019 BGCO Annual Meeting will emphasize a convention-wide work plan titled “Bold Advance 2020.”

“This plan will set the foundation and focus for our work in the coming years and better position us to support and challenge one another to advance the Gospel in our state and around the world,” Dilbeck said.

Dilbeck finished his address, referencing previous board meeting reports in BGCO history. He also declared what future Oklahoma Baptists would be able to read about this meeting.

“I want the record to reflect that the Baptist General Convention of Oklahoma Board of Directors,” Dilbeck said, “we humbled ourselves before the Lord in anticipation of our work in 2019. We took some time here at the end of 2018, acknowledging we have a lot of important decisions to make, work to do, and I want those who come behind us to know that the ‘Bold Advance 2020’ was born in prayer.”

Board members then divided into smaller groups and spent time praying.

BGCO Board members approved a recommendation that was jointly submitted by the Executive Committee and the Finance Committee regarding the Baptist Messenger.

The recommendation stated: “That beginning January 2019, the Baptist Messenger move from a weekly to semi-monthly print publication.”
The Messenger will remain a weekly publication until January 2019. For more information on this publication change and other news relating to the new schedule, see the article above.

The 2019 BGCO Cooperative Program (CP) objective of $25.5 million was adopted by Board members. In the event CP giving in 2019 does not reach the budgeted objective distribution to the BGCO, affiliates and the Southern Baptist Convention will be proportionately adjusted.
Dilbeck announced in his comments to the Board this is a one percent reduction from the 2018 budget.

Joe Ligon, pastor of Marlow, First, will complete his role as BGCO president at the 2018 Annual Meeting, Nov. 12-13, at Edmond, First. As he completed his duties of overseeing the recent Board meeting, Ligon spoke on his two years of service as BGCO president.

“I will spend the rest of my days reflecting on these two years and the spiritual marker that they have been,” Ligon said. “Thank you Oklahoma Baptists for an incredible ride. I am humbled.”

Kellogg reported on a separate church-extension fund called Water’s Edge, which works with Baptist entities outside of Oklahoma. Kellogg also shared how Water’s Edge got its name. “In the New Testament, every time we see our Lord on the water’s edge, He was followed by ministry and miracles, and that’s what we want to be a part of,” he said.

Bill Pierce, president of Baptist Village Communities (BVC), reported that BVC is celebrating 60 years of ministry. He also shared all nine BVC licensed communities received “zero deficiencies” from the Oklahoma Board of Health surveys this year.

David Whitlock, president of Oklahoma Baptist University (OBU), shared OBU has experienced remodeling on campus. He reported the Agee Residence Center (formerly known as Brotherhood Dormitory) now has new painting and flooring on every hallway and in every dorm room. The Geiger Center, Whitlock said, now houses the Spiritual Life Office which was previously located in Montgomery Hall.

“This puts (the Spiritual Life Office) right in the heart of the campus, along with the rest of the student development staff on the first floor of the Geiger Center, the student union building,” Whitlock said.

“By the time we get through in December, we will celebrate our third anniversary of being involved in foster care,” McNeece said. “We will have helped more than 500 Oklahoma Southern Baptist churches to begin or enhance their ministry in foster care.”

The next BGCO Board Meeting will be Feb. 5, 2019, at the Baptist Building.