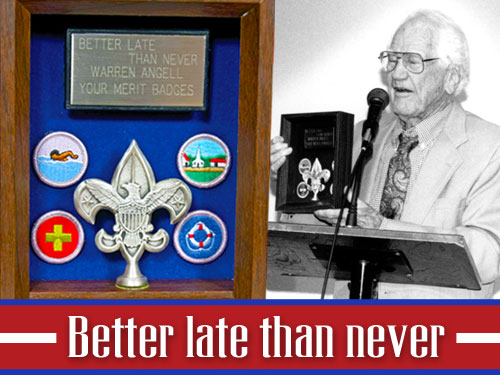 Twelve-year-old Thomas Angell has quite a history. Not only is he the great-grandson of Warren Angell, who served as dean of the college of fine arts at Oklahoma Baptist University and founded the world-famous bison Glee Club, but his ancestry goes back to the establishment of Rhode Island and the first Baptist church in America.

In fact, young Thomas, at the request of his great-grandfather, is named after Thomas Angell, who was one of the founders of Providence, R.I., and an apprentice of Roger Williams, who started the first Baptist church in America.

And recently, Thomas acquired his great-grandfather’s Boy Scout merit badges, which were denied Warren Angell more than 90 years ago.

It all started at a Boy Scout camp, Camp Russell, in the Adirondack Mountains in upper state New York when Warren was 12 years old, the same age as Thomas is today.

Active in his troop, Warren worked hard to acquire the merit badges, which were to be presented around a bon fire at the end of camp. However, early during the week, Warren, because of his musical abilities even at that early age, was asked to help out with music and play the piano for the camp.

Warren waited expectantly as the merit badges were given out. When his name wasn’t called, one of the counselors took him aside and told him since he helped with the music, he was considered one of the staff, and wasn’t eligible to receive the badges (which he had earned). His family said he was brokenhearted.

Early the next morning, upset over not being treated fairly, Warren gathered his belongings, lifted the back side of the tent where he had been staying, and started running down the mountain away from the camp. Some of the counselors saw him, and started chasing after him, yelling at him to come back.

He kept running, and out of nowhere came a taxi cab. The driver took one look at Warren and then at the people chasing him, opened the door and said “get in,” and took him home.

Over the years, not getting the merit badges he had earned continued to bother Warren. Every time he saw a troop of Boy Scouts, he talked to the leader and told him the story.

“It became a legendary story in our family, and something we always laughed at,” said daughter-in-law Nikki Angell.

When OBU was scheduled to honor Warren on his 95th birthday in 2002, Nikki called OBU, told the story of the merit badges, and asked if they thought the Boy Scouts might be interested in doing something for Warren during the celebration.

“As it turned out, the head of Boy Scouts in Oklahoma came to a luncheon and presented the merit badges to Warren,” said Nikki. “It was a big hit.”

Warren proudly displayed the framed badges on the mantle in his home. When he died in 2006, just a week before his 99th birthday, his wife, Twyla, donated the badges, along with other memorabilia to OBU, with the understanding that if any family members wanted any of the mementoes, they were to be available to them.

Since Thomas is involved in Boy Scouts and recently returned from a national meeting at Camp Alexander near Fountain, Colo., the family thought it would be neat if he had the badges. OBU presented them to him in a ceremony on campus May 25, the day after his 12th birthday.

Thomas has earned Boy Scout badges of his own in archery and fishing, but is proud to be the recipient of his great-grandfather’s badges.

“I really like hearing stories about my great-grandfather,” said Thomas, who was not quite 6 years old when the elder Angell died.

“Thomas has become very interested in his family history, so we are asking those who knew Warren or were involved with him at OBU to email us with any stories they might have,” said Nikki, who is Thomas’ grandmother. Send to nikki_nielsen@cox.net.