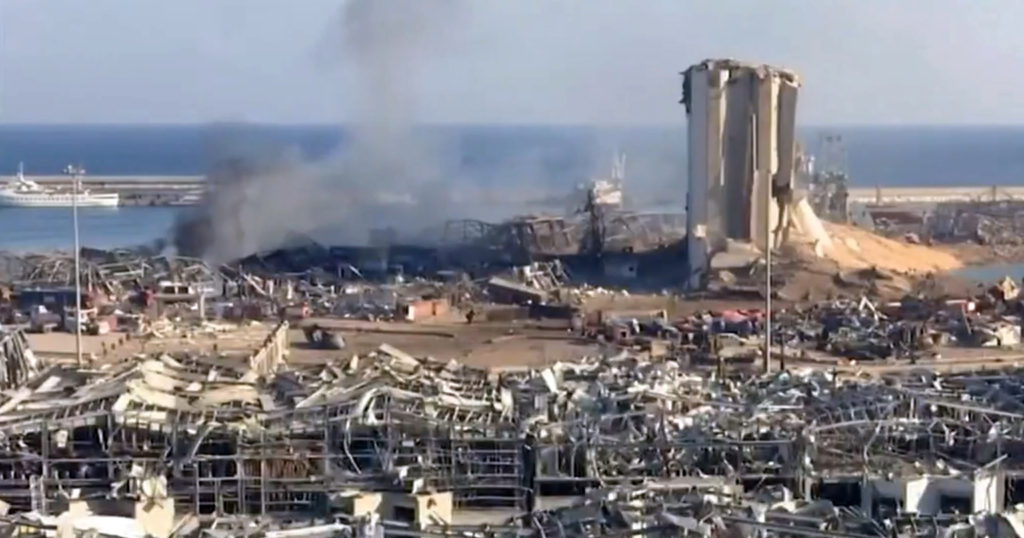 BEIRUT (BP)—Southern Baptist Messianic believers expressed heartbreak after unexplained explosions at a Beirut port warehouse Tuesday, Aug. 4, killed at least 100, injured more than 4,000 and devastated much of the city.

Leaders of the Southern Baptist Messianic Fellowship (SBMF), a group of about 350 Jewish believers, said they are praying and looking for a reputable humanitarian aid group to channel help for the injured and displaced.

“Our hearts grieve over the recent explosion that happened in Beirut, Lebanon. Reports of the loss of life and the injuries are heartbreaking,” SBMF Missions Development Manager Michael Herts told Baptist Press on behalf of the group. “In the midst of this tragedy we pray that God will provide further opportunities for Lebanese Christians to bring forth the Gospel.

“May the light of the Lord pierce the darkness during this difficult time. The people of Lebanon are certainly in our prayers.”

General Secretary Rabih Wazir of the Lebanese Baptist Convention—which includes 32 congregations and about 1,600 members—said he is still receiving reports of damaged churches and injured members.

“Many of the Baptist churches that are in Beirut were damaged because of the huge explosion. We are still receiving news and updates from everyone about what destruction happened to their church buildings and if there is anyone injured,” Wazir told Baptist Press Wednesday. “Until now, all injuries of our Baptist brothers and sisters are minor, but damages to the churches and homes of the Baptist community are much bigger.”

Wazir said about 300,000 families lost their apartments in the densely populated city.

“Unfortunately, many Lebanese are homeless because of this tragedy,” he said. “Our Baptist seminary, ABTS (Arab Baptist Theological Seminary), will be hosting tens of homeless families for some time until their homes are fixed or until they find a new place to live in.”

Months before the tragedy, relief efforts to help Baptists impacted by Lebanon’s financial crisis were already underway in a cooperative effort of the Lebanon Baptist Convention and other groups.

“Now, this kind of support should be expanding and the work will be applied on a higher, faster and more effective scale to support our Baptist community,” he said. “Please, keep us in your prayers through the agony we are passing through in Lebanon. We’ve passed through many turmoils before, but what’s occurring now, is a whole new level.

“We believe that our Lord is in control,” Wazir said. “He’s in our boat and the storm will calm when He orders it to calm.”

Israel has been involved in a longstanding conflict with the Islamic Hezbollah militant group that has extreme influence in Lebanon and holds political power. But Herts, who leads a Chosen People Ministries outreach to Jewish people in New York, described Israel as a friend of the Lebanese people.

Joseph Kassab, president of the Supreme Council of the Evangelical Community in Syria and Lebanon, told Christianity Today that neighborhoods nearest the explosions are heavily Christian, and generally poorer than others.

“One of the worst affected was Jesus Light of the World church in the Qarantina neighborhood, affiliated with the Christian Alliance denomination. But similar was the downtown All Saints Anglican church. And the historic National Evangelical Church had all its stained-glass windows blown out,” Christianity Today quoted Kassab. “The pastor was startled by the first vibration, and then the second explosion sent shards down right where he had been standing. But everyone is affected. Catholics, Orthodox, and as you move a little further away you see the damage in Muslim neighborhoods also.”

The 2018 CIA World Factbook counts 33 percent of Lebanon’s 5.5 million people as Christian—excluding refugees—with the majority of Christians identifying as Maronite Catholic in the country that is 61 percent Muslim.

SBMF Executive Director Ric Worshill, a NAMB chaplain, expressed particular sympathy for the firefighters who were likely caught in the flames during the explosions, the second one more massive than the first.

Worshill was awaiting word Wednesday, Aug. 5, regarding his search for a reputable humanitarian aid group to commend to SBMF members and churches.

Lebanese officials have not determined the cause of the explosions, but have speculated they are tied to fireworks and 2,750 tons of ammonium nitrate stored in a port warehouse since 2013, the Associated Press reported. The government has placed an unspecified number of Beirut port officials under house arrest pending an investigation.

Worshill, a former policeman trained in firebomb and arson investigations, agreed with news reports that the massive clouds from the explosions were characteristic of ammonium nitrate.

The death count from the explosions is expected to increase as emergency crews continue removing debris. The tragedy displaced hundreds from their homes in the country already tackling the COVID-19 pandemic that has further weakened Lebanon’s already struggling economy.

Residents were searching for missing relatives Wednesday, bandaging wounds and retrieving any possessions not destroyed in the blazes, AP said. Ambulance sirens filled the city as rescue workers shoveled glass and rubble. Almost nothing was left untouched by the blast.