96-year-old on baptism: ‘I couldn’t wait to get in that water’ 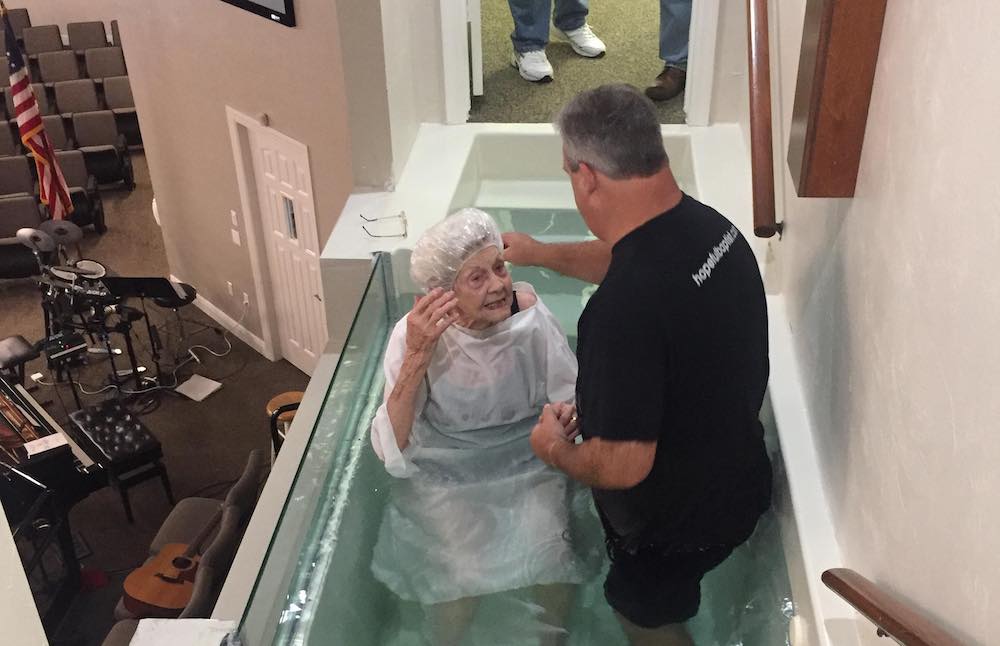 LAKE CITY, Fla. (BP)—At 96-and-a-half, Betty Schoch is believed to be the oldest person to ever be baptized at Lake City, Fla., Hopeful.

Schoch, who insists the half be included with her age because she is proud of her longevity, was baptized after recently becoming a member of the church.

“I could not wait to get in that water,” she said. “I was so excited and at peace to know I had finally taken care of this very important act of obedience. It made my heart full of joy because I could hear His voice saying, ‘Well done, my good and faithful servant.’ It filled me with His indescribable peace.”

Raised in a Christian home and baptized as an infant, she was eager to take part in believer’s baptism, demonstrating her own public profession in Jesus Christ. Schoch says she accepted Christ as her Savior at a tent revival in 1969 when she first moved to Lake City. She then joined a Methodist church and became active in many ministries including youth, Sunday School, choir and mission trips.

Schoch, who gave up driving only a few years ago, began attending Hopeful about two years ago with her daughter and son-in-law, with whom she lives. Once she got plugged into a great Sunday School class, she soon felt compelled to become a member of the church.

Having witnessed river baptisms during 15 mission trips to Haiti, Schoch at first wanted to be baptized in a river—just like Jesus. But due to her age and safety concerns, the baptistery was chosen as the best option.

“I think Pastor Mark could visualize me floating down the river and not being able to catch me,” she said with a laugh.

While baptisms are typically held during morning worship services, Associate Pastor Mark Cunningham said he decided to baptize Schoch on a Wednesday afternoon so there would be no time constraints.

“When she came up out of the water, she raised her fist,” Cunningham said. “She was so excited. She gave me a big hug. It was such a special time. I cried I think more than she did.”

In attendance that day were Schoch’s daughters and their families, along with interim pastor Steve Thompson and his wife Gloria. Photos taken during the baptism were shown to the congregation the following Sunday when Schoch joined the church.

Schoch said her advice to the older generation would be that you’re never too old to be involved at church.

“I knew there was something I still had to do,” she said of her baptism. “And now I’m still wondering what else He’s got for me to do.”

Her favorite passage of scripture is Psalm 46:10 — “Be still and know that I am God.” She says it’s a great reminder for us all during these hectic times.

“You can get so busy, and everything is going so fast, then you’ve got to just take a deep breath and know the Lord is with you and be still and think about it,” she said.

Her baptism and new church membership have now been added to the fifth rewrite of her obituary, which Schoch began writing years ago to ensure its accuracy.

“When you’re 96 and you’ve got something that isn’t done yet, you better hurry up because you never know,” she said. “I’m so thankful and so blessed. I am in good health. I can’t see very good, but I can still go. The Good Lord has given me so many blessings.”

View all posts by David Moore