A Tennessee couple has gifted to Oklahoma Baptists an instrument that once was owned by Baylus Benjamin (B.B.) McKinney, a name forever linked to Oklahoma Baptist music history. Wilson and Charlene Henderson of Spring Hill, Tenn. recently donated the portable pump organ used by McKinney as he led music in revivals and at Ridgecrest Baptist Assembly in North Carolina. 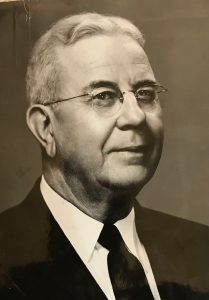 “As a Baptist minister of music, now 64 years, my family has enjoyed having the little organ,” Wilson Henderson said. “We have used it to sing at family gatherings… it occupied a prominent place in our home. Now, my wife and I have down-sized, and it is time for the organ to again be with the memorabilia of its original owner, B.B. McKinney.”

McKinney led music at Falls Creek Baptist Assembly for almost 30 years, and the original landmark chapel on the assembly campgrounds was dedicated in his name in 1965. The original free-standing chapel—a centerpiece of the assembly grounds—was removed in 2005 to make way for construction of the new, 7,056-seat, climate-controlled tabernacle at Falls Creek. An updated McKinney Chapel was included in the design of the new tabernacle.

It began with McKinney’s accompanist, Mamie Helm, who kept the instrument when McKinney died in September 1952 from injuries he sustained in an automobile accident in August while returning home from directing Church Music Week at Ridgecrest. At that time, McKinney was secretary of the Church Music Department of the Southern Baptist Convention’s Sunday School Board—now known as LifeWay Christian Resources—where he edited the Broadman Hymnal. When she died, Helm left the organ to her brother, Harry, who later passed it on to the Hendersons. 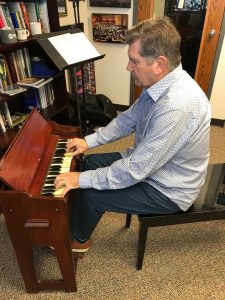 Lind said he would like for the three-octave organ to be housed either in the Oklahoma Heritage Room on the third floor of the Baptist Building in Oklahoma City or in the Gaskin Baptist Archives at Oklahoma Baptist University (OBU) in Shawnee. He is excited that Oklahoma Baptists will have the opportunity to see and hear the organ played in future events.

“We hope to have some of our well-known Oklahoma Baptist accompanists play the organ,” he commented.

“McKinney was one of the iconic shapers of church music; certainly for Baptists,” Lind added. “For example, the melody of the song, ‘Wherever He Leads I’ll Go’, is titled ‘Falls Creek.’”

McKinney was involved in writing more than 500 hymns and Gospel songs, including such endearing tunes as “Breathe on Me,” “Speak to My Heart,” “Glorious in Thy Name,” “The Nail Scarred Hand,” “Let Others See Jesus in You,” and “Have Faith in God.” His song, “Lord, Send a Revival” was used as a theme song in Billy Graham revivals.

McKinney also was a professor of music at Southwestern Seminary and conducted music for hundreds of revival meetings and music conferences in Oklahoma and other states. He was the editor and compiler of four hymnals—including the Broadman Hymnal (1940)—and 19 song books. In 1922, he earned a bachelor of music degree from the Siegel-Myers School of Music in Chicago, and received an honorary degree of doctor of music from OBU in 1942. He was inducted into the Gospel Music Hall of Fame in 1982, and the Oklahoma Baptist Hall of Fame in 1993.