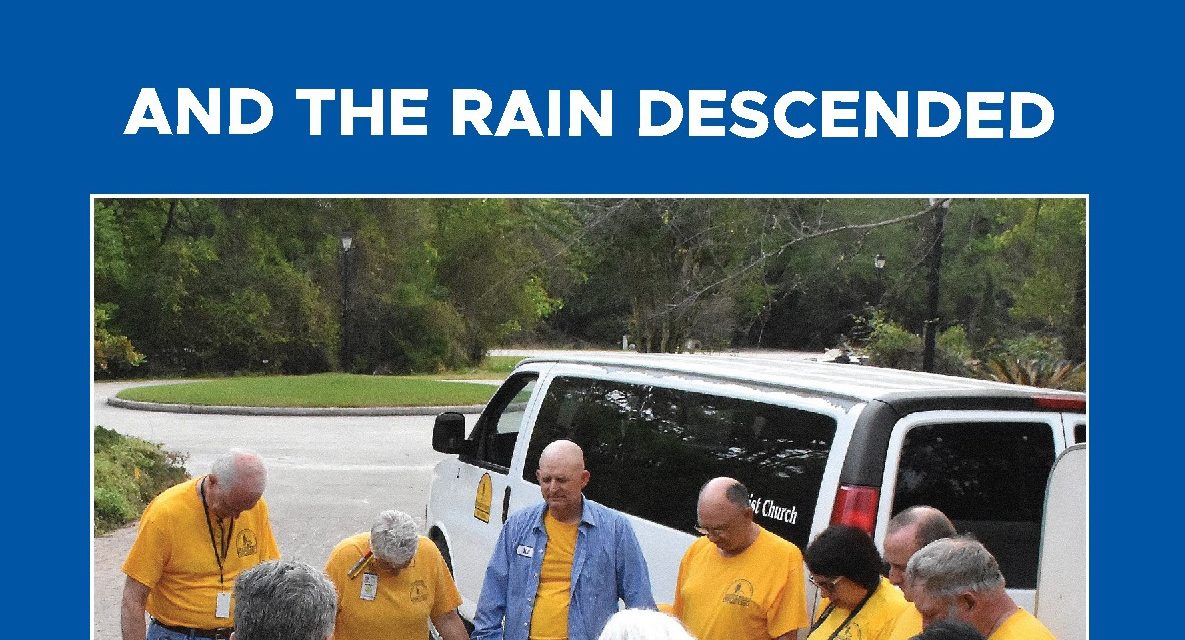 Between Oct. 11-13, 1973, Oklahoma’s greatest urban rainfall on record occurred in the Enid area. An estimated 15-20 inches of rain fell over a 100-square-mile area. About 12 inches fell in just three hours! The downpour officially totaled 15.68 inches and forced some residents to cut holes in their rooftops to reach safety. Tragically, however, nine people died. 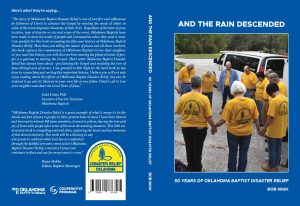 ‘And the Rain Descended’ is available for purchase in both paperback ($15) and Kindle ($9.99) versions at Amazon.com.

By comparison, the famous Johnstown (Pa.) Flood—known locally as the Great Flood of 1889—occurred on May 31 after the failure of the South Fork Dam on the south fork of the Little Conemaugh River, 14 miles upstream from Johnstown. The dam finally broke after several days of extremely heavy rainfall. The U.S. Army Signal Corps estimated that 6-10 inches of rain—more than five inches less than what deluged Enid in October 1973—fell during a 24-hour period over the region.

Just as hundreds, perhaps thousands, of people rushed to the aid of Johnstown, Pa. in its time of need, Oklahoma Baptists also were motivated to help their fellow citizens in the Enid area in 1973, including a fledgling group of volunteers who comprised the genesis of what was to grow into one of the largest, most-active, and most-respected disaster relief organizations affiliated with the Southern Baptist Convention (SBC).

According to a letter mailed to state pastors from the Baptist General Convention of Oklahoma (BGCO) Department of Brotherhood dated Oct. 26, 1973, the Disaster Relief Committee of the BGCO Board of Directors met in emergency session on Oct. 22 with the goal of finding a way to “assist our Baptist congregations in flood-ravaged north central Oklahoma.” The committee recommended that an offering be received from state churches on Nov. 11, 1973. A minimum goal of $25,000 was established, stating that “all receipts above this amount will be placed in a special account to assist in future disasters.”

To provide support for the recommendation, BGCO Brotherhood Director Laddie Adams pointed out that, “The local churches in that area have at least 35 families who have suffered a total loss, with many others who have major damages. Some of the churches have received an offering to help their own members; others are unable to make much contribution. All Oklahoma Baptists can help. Please allow an opportunity for your congregation to make contribution to these needy sister churches on Nov. 11. The next disaster could be yours.”

One month later, on Dec. 11, 1973, at a meeting of the BGCO Board of Directors, board member Raymond Gary, former Oklahoma Governor, made a motion to establish a visible presence of Baptists at disaster sites in our state.

“When I have gone to tornado-damaged communities, I have seen the American Red Cross and the Salvation Army with their emergency relief vehicles, but have thought, ‘Where are the Baptists?’” Gary explained. The former governor’s motion carried unanimously, and the implementation of a plan for Oklahoma Baptist disaster relief began.

Fifty years later, and after more than two years of research, writing and editing, retired Baptist Messenger Managing Editor Bob Nigh has compiled a history of Oklahoma Baptists’ disaster relief ministry. Nigh, now the historical secretary and director of history for Oklahoma Baptists—and a disaster relief chaplain endorsed by the North American Mission Board—was faced with a daunting task. How do you condense five decades of ministry into a readable, comprehensive document?

“Through my own memories, personal interviews, online research and scouring the pages of the Baptist Messenger, Oklahoma Baptists’ Annual Reports and other documents, 50 years’ worth of information was cobbled into what I hope is a coherent manuscript,” Nigh said.

The result is a book titled, And the Rain Descended, referring to the deluge that inundated the Enid area in October 1973.

“This work is simply an attempt to tell a story. A narrative of help and hope,” Nigh commented. “It is dedicated to the thousands of faithful, God-called ‘yellow shirts’ who have given hours, days, weeks and, in many cases, years of selfless service to our Lord. Service which was performed following extremely tragic, difficult and heart-rending circumstances.

“But, it highlights much more than human response to earth-shattering events. It’s a chronicle of how God used many thousands of volunteers to shower His love on a hurting humanity, meeting not only physical needs, but also spiritual needs. And as a result, many people have had a life- and eternity-changing encounter with Jesus Christ as the Gospel was shared with them.

“Obviously, there is no ‘end’ to this story. As we all know, in a world driven by evil selfishness, hatred and cruelty, more disasters—both natural and man-made—will occur. We can take solace, however, in that when those dire and tragic moments do occur, Oklahoma Baptist Disaster Relief volunteers will be among the first to step up and take the love of Jesus to those who need it.”

The book is endorsed on its back cover by Todd Fisher, Oklahoma Baptists’ executive director-treasurer, and Brian Hobbs, editor of the Baptist Messenger. Fisher wrote, “I am grateful for this book recounting the 50-year history of Oklahoma Baptist Disaster Relief. More than just telling the names and places of all those involved, this book captures the commitment of Oklahoma Baptists to love their neighbor. As you read this history, you will discover how meeting the physical needs of people is a gateway to sharing the Gospel. That’s what Oklahoma Baptist Disaster Relief has always been about—proclaiming the Gospel and modeling the love of Jesus through acts of service. I am grateful to Bob Nigh for the hard work he has done in researching and writing this important story.”

Hobbs wrote, “Oklahoma Baptist Disaster Relief is a great example of what it means to be the hands and feet of Jesus to people in their greatest hour of need. I have been blessed and honored to witness DR team members, donned in yellow, sharing the love and joy of Jesus with people after some of the most devastating disasters. This 50th anniversary book is compelling and well done, capturing the heart and key moments of this storied ministry. This work will be a blessing to any who pause to celebrate what God has accomplished through faithful servants connected to Oklahoma Baptist Disaster Relief, a ministry I pray God continues to bless and use for many years to come.”

And the Rain Descended is available for purchase in both paperback ($15) and Kindle ($9.99) versions at Amazon.com.