Americans open to most churches, regardless of denomination 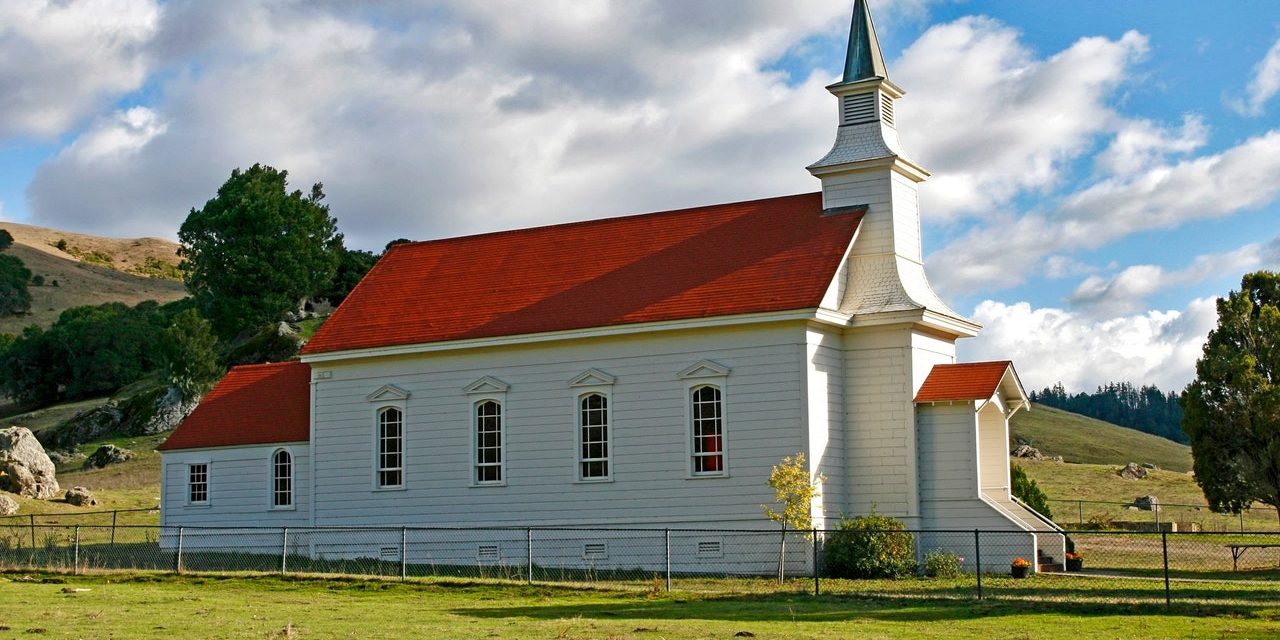 Most Americans are open to a variety of denominations of Christian churches, including many people of other faiths or no faith at all.

Americans have a wide range of opinions and impressions about Christian denominations, but most won’t rule out a church based on its denomination, according to a new study from Lifeway Research. From a list of nine denominational terms—Assemblies of God, Baptist, Catholic, Lutheran, Methodist, Pentecostal, Presbyterian, Southern Baptist and non-denominational—more Americans rule out Pentecostal than any other denomination. Just over half of Americans (51 percent) say a church with Pentecostal in the name is not for them. 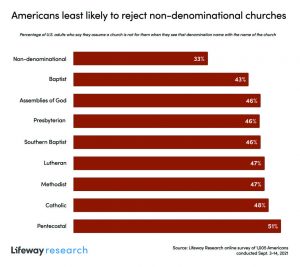 “Church names vary greatly,” said Scott McConnell, executive director of Lifeway Research. “Names including St. Peter, Trinity, Crossroads and Presbyterian reflect biblical people, theology, modern imagery or references to the branch of Christianity the church is tied to. Most people have preexisting impressions of denominational groups when they see them in a church name or description.”

For each denominational group studied, 11 percent to 32 percent of Americans say they are not familiar enough with that denomination to form an opinion. This response is often more common than unfavorable responses and may indicate many don’t understand denominational differences. 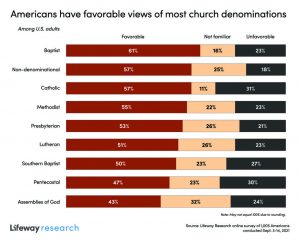 “The reputation of denominational groups may be tied to what someone knows about that group’s doctrine, but it also can be the sum of people’s impressions of local churches in those groups,” McConnell said. “Personal experiences with local churches, word-of-mouth and whether they see them serving in their communities can lead people to have positive or negative impressions of those groups.”

Infrequent churchgoers are also generally open to non-denominational churches, as well as Presbyterian and Lutheran churches. Christians who attend a worship service less than once a month are least likely to say they assume a church is not for them when they see Presbyterian (36 percent), Lutheran (37 percent) or non-denominational (22 percent) in the name of a church.

What’s in a name?

Denomination identifiers in the names of churches spark different responses among Americans. For non-Christians, three denomination names stand above the rest as deterrents for attending that church: Baptist, Lutheran and Southern Baptist. People of other religions are most likely to say they assume a church is not for them when the name Baptist (63 percent), Lutheran (65 percent) or Southern Baptist (66 percent) is in the name of a church.

The majority of Catholics indicate most of the Protestant groups are not for them. Only Baptist (49 percent) and non-denominational churches (44 percent) are ruled out by less than half of Catholics. Similarly, 58 percent of Protestants assume a Catholic church is not for them.

Those who are religiously unaffiliated are most likely to have unfavorable impressions of Catholic (47 percent), Pentecostal (41 percent) and Southern Baptist (40 percent) churches. Although the religiously unaffiliated think most favorably about Baptist (36 percent) and non-denominational (36 percent) churches, the majority don’t think favorably of any denomination.

“The one group of Americans that consistently has more people with unfavorable than favorable views of different religious groups are those who are religiously unaffiliated,” McConnell said. “More of them have negative impressions of every group except for non-denominational churches.”

But faith isn’t the only factor in people’s impressions of churches. In some cases, ethnic, educational and geographical factors play a role as well. People who live in the South are among those most open to Southern Baptist churches, as they are least likely to say they assume a church is not for them if the name Southern Baptist is in the name of the church (40 percent). Those in the South are also most likely to have favorable views of Baptist churches (70 percent).

The online survey of 1,005 Americans was conducted by Lifeway Research Sept. 3-14, 2021, using a national pre-recruited panel. Quotas and slight weights were used to balance gender, age, region, ethnicity, education and religion to reflect the population more accurately. The completed sample is 1,005 surveys. The sample provides 95 percent confidence that the sampling error from the panel does not exceed plus or minus 3.3 percent. This margin of error accounts for the effect of weighting. Margins of error are higher in sub-groups.

Lifeway Research recognizes there are differences between online and phone methodologies and therefore only references the earlier study in our reporting. While the exact impact is unknown, both 2021 and 2014 studies are reliable independently and provide valuable insight.