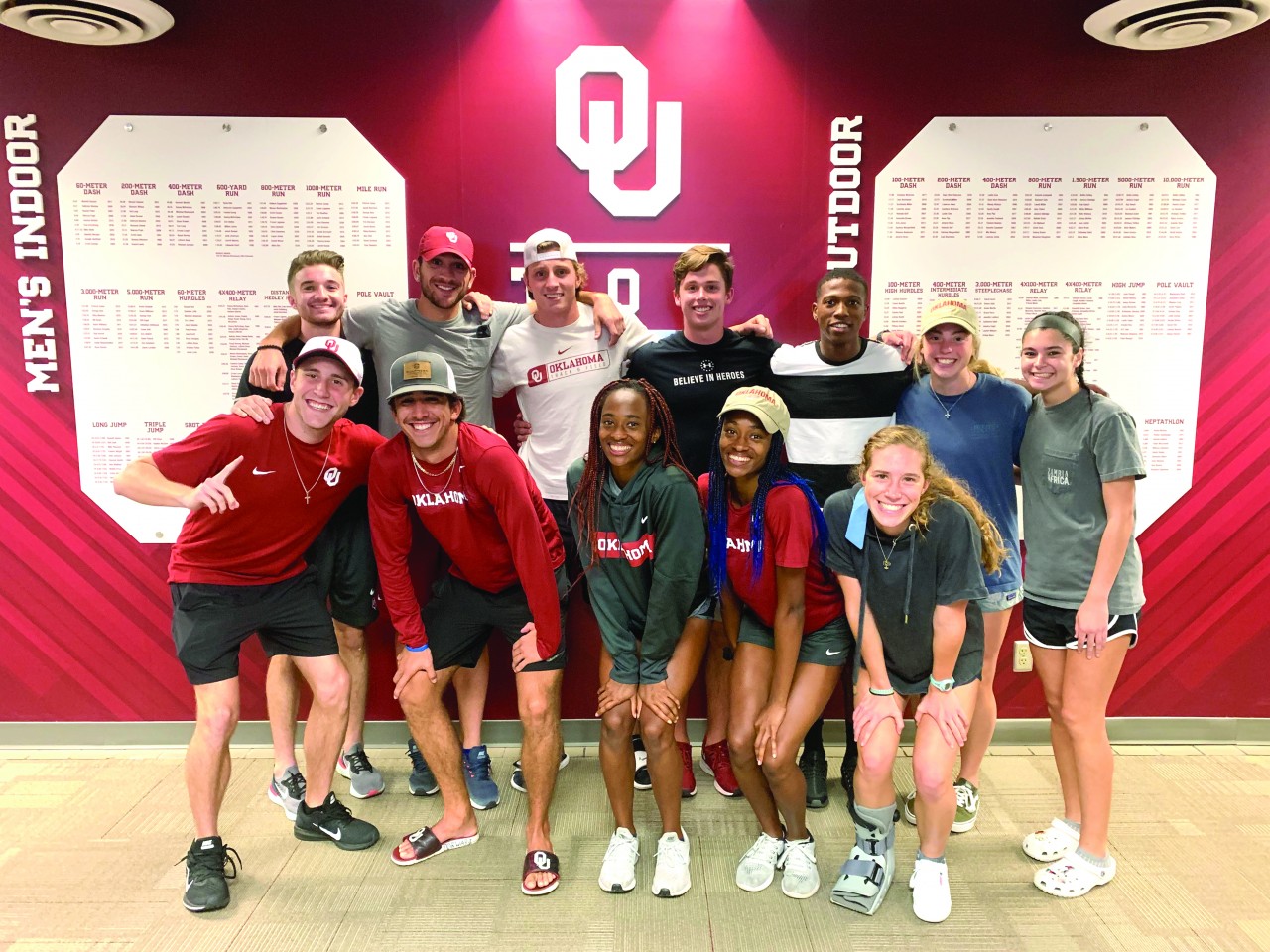 NORMAN—Baptist Messenger readers were introduced to Andrew Doherty earlier this year. Known by his nickname “Adoh,” he first appeared in the Jan. 24 edition, which shared his life-changing experience of surrendering his life to Christ while a member of the track team at the University of Oklahoma (OU).

The Boston native had no previous knowledge of what it meant to be a Christian, but Adoh’s exposure to Christianity grew extensively during his first year at OU, through people he met on campus. He made a profession of faith in Christ the following summer after he met a missionary in Colorado Springs, Colo. who led Adoh to the Lord and helped him see God in a whole different perspective. 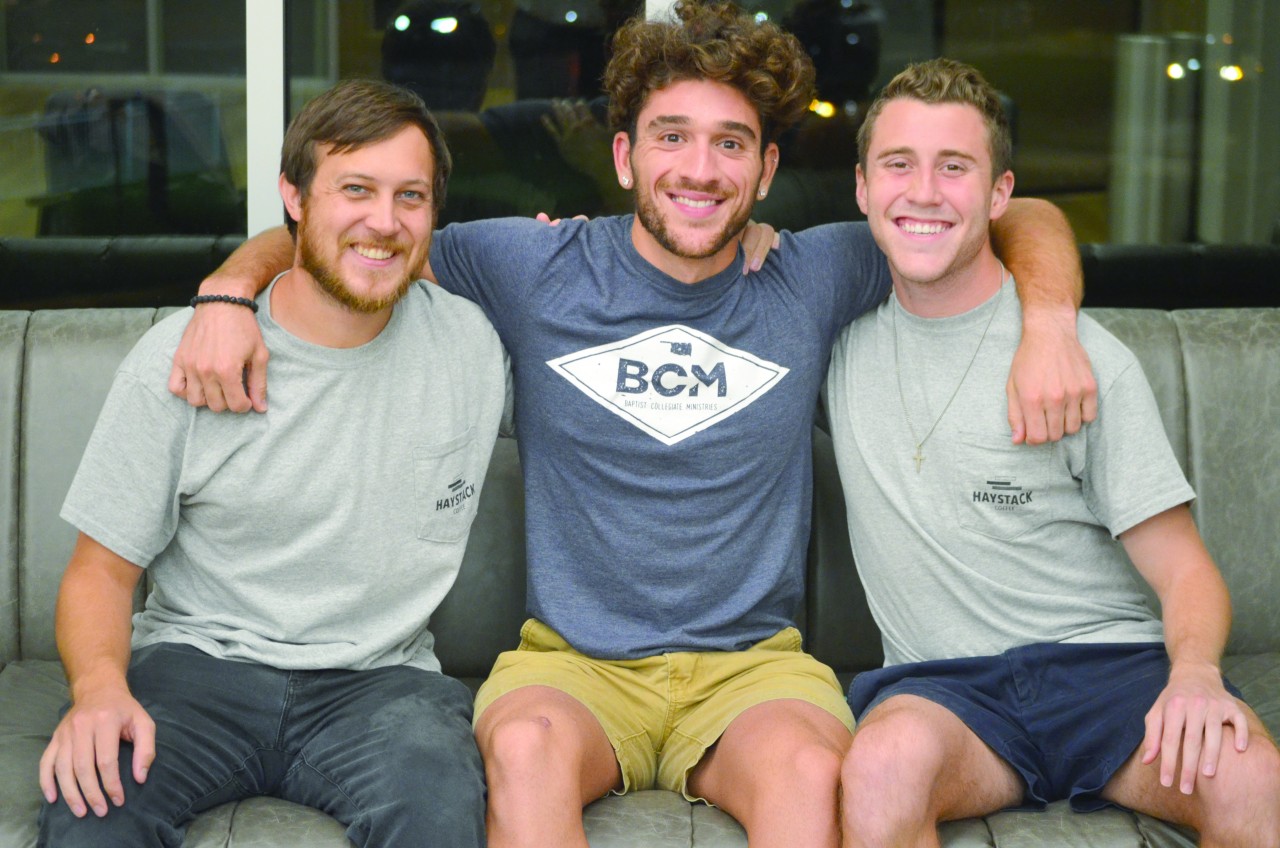 Bronson Baker, left, and Adoh, center, started a Bible study in 2018, inviting the OU track team. Heath Warren, right, will be leading the Bible study in the future.

In the fall of 2018, Adoh met Bronson Baker, a campus missionary through the OU Baptist Collegiate Ministry (BCM), and together they started a Bible study that meets on Thursday nights during the school year and involves members of the OU track team. Now in its second year, the Bible study continues to have an impact, as 24 student-athletes have attended, and the Bible study averages 12-14 people a week.

“It’s just growing. People are growing,” Adoh said. “The Bible study offers a safe spot, where my teammates can share the struggles they are going through, and then we talk about how God is going to help us. There are unbelievers attending, and we also gave out six Bibles to people who did not have one.”

Adoh knows God is using him to reach his teammates, recognizing he relates so well with what they are experiencing.

“A year ago I was where they are,” he said. “The best way to explain it is I know what they are feeling. They dream about All-America status and competing in the Olympics, but they also know that something is missing. I’ve had that feeling. That’s a ‘custom puzzle piece’ made by God and only for God.”

Adoh also is growing in his understanding of the Bible. He is aware of the parable of the seed sower in Matthew 13, how the seed fell on rocky soil, shooting up too fast but did not last. He is making a point not to let his life reflect the rocky soil.

“Everything I do, I know, it’s from God,” he said. “Everything is His. Once you meet Him and know Him, you can’t actually function without Him.”

He also credits the discipleship he gets from Baker and the fellowship he found at the BCM.

“The BCM is an incredible resource,” he said. “It provides community which is one of the pillars of living the Christian life.

“The BCM is a place where I can meet people outside of my ‘bubble,’” Adoh continued. “Being a student-athlete, you put yourself in a bubble. I choose to come here because this is true Christian community. I meet people who help me grow. They hold me accountable.”

Adoh has shared his testimony in churches, especially with youth groups. With the energy and excitement he demonstrates, it is understandable that Adoh has a new passion to pursue full-time ministry in the future.

For now, Adoh still has his hopes set on competing in the Olympics, but now he has a new focus. He is striving to make his Olympics pursuit an opportunity to share his Christian faith with a larger audience.

“We need more Christians with a microphone,” Adoh said. “My goal is to get as far as I can while my body is able. As long as God is ordaining it, I’m going to run as hard as I can. I want everybody to know my name so they can know His.”

An experienced distance runner, Adoh has pursued competing in the Olympic steeplechase. However, he has added another event to pursue.

Adoh was injured all summer. Though he did not train, he said it was a blessing in disguise, as he has changed his training perspective. With an upper body injury, he could only do lower body training. He spent a lot of time on a bike and found out he was good at cycling. He also was competitive in swimming.

“I’m actually now training for the Olympic tryouts in the triathlon,” Adoh said. “I’ve been doing some time trials on my own, and it’s actually going to be possible. I’m closer now to compete in an event (triathlon) I’ve never touched before than in an event (steeplechase) I’ve been training for my entire life.”

Adoh has received much support on his attempt to compete in the Olympic triathlon, as well as continue to compete in steeplechase.

Some of the OU track athletes who attend the weekly Bible study.

He also plans for the OU track team Bible study to continue, even after he graduates. His current roommate Heath Warren, also on the track team, will be leading the Bible study in the future.

Adoh’s life has seen much excitement in the last few years. Some things have changed, and some things in his life remain the same. But as Adoh makes his plans, he knows God directs his steps (Prov. 16:9). Maybe Adoh’s steps will lead to Tokyo in 2020.