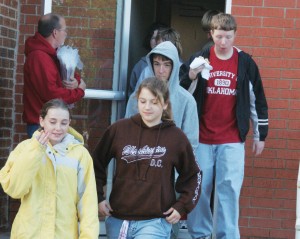 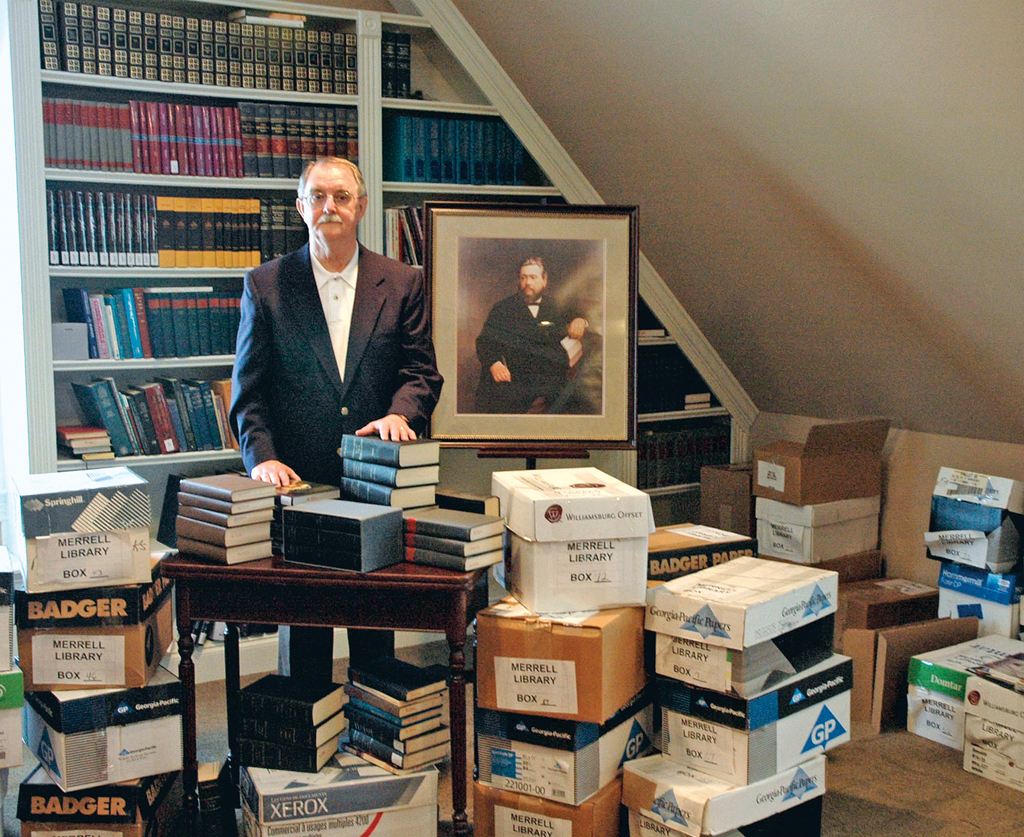 “Oklahoma Baptists have been praying for good weather for today for months,” said Alan Quigley,” evangelism specialist for the Baptist General Convention of Oklahoma. “What did we expect?”

Quigley joined thousands of Oklahoma Baptists as they spread across the state delivering more than 600,000 packets containing the Gospel to homes in cities and rural areas throughout Oklahoma, in the largest distribution of the Gospel ever attempted in the state.

Not only has Quigley spent the last few weeks driving across Oklahoma delivering materials to churches and associations, but also he was on hand to help deliver packets for a new church start in Claremore.

Danny Cotner, pastor of New Creation Church, which began Jan. 1, but actually kicked-off with a service on Easter, visited with Quigley about ACROSS Oklahoma during the State Evangelism Conference. As a result, the Church Outreach team chartered a bus and drove to Claremore to help the new church hand out 600 packets in a five-mile area. Ten church members joined 16 COT employees and 14 family members/friends to cover about 15 housing additions with 25,000 people.

The young church was advertising its Easter service, which was a sunset service at 6 p.m. instead of a sunrise service, preceded by an ice cream social.

“At this point, we are having only Sunday evening and Wednesday evening services,” said Cotner. “We started with nine adults and seven children from Claremore, Memorial Heights, and our focus is going after the lost, not church people.”

The majority of Oklahoma churches were poised to cover their areas March 31, although some did the distribution on Sunday, and some did it the week before. In many cases, entire towns were covered. Marlow, First and East Side Churches were placing door hangers on every home in that city. Nearby, Duncan, First covered 2,500 homes. Sapulpa, First covered 5,000 homes in that area. Hobart, First touched nearly every home with 1,200 door hangers. Oklahoma City, Southern Hills placed 8,800 door hangers on homes in south Oklahoma City, while Oklahoma City, Portland Avenue, hung 6,000 messages. Pawnee, First distributed more than 800 packets, also putting information in Angel Food boxes that were given out that day. In Enid, 15,000 packets were delivered, and Chickasha, First visited 1,500 homes. 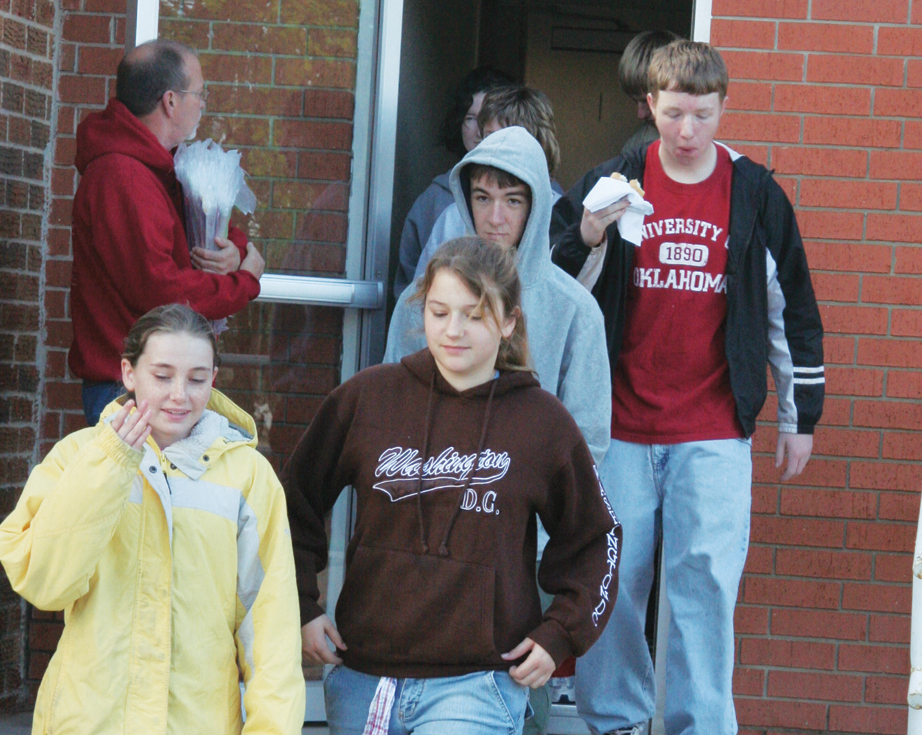 Many churches, such as Moore, Highland and Blanchard, First, got creative, adding packages of microwave popcorn to the bags and inviting people to “pop in and visit.”

While the results of the massive outreach program will not be known for some time, there are already stories about how the packets of information have resulted in professions of faith.

Duke, First scheduled a revival March 25-29 with Ralph Chapman, director of missions in Beckham-Mills Association, preaching. Instead of waiting until after the revival, church members placed the packets on doors the weekend before the revival.

“This was the type of revival we hope for and pray for, but few of us ever get to see,” said Chapman.

Chapman, who served as pastor at Duke 18 years ago, said the church has gone through some recent struggles, is currently without a pastor, and the members were willing to do anything for a revival in their church.

“They were so desperate for a move of God, they actually did what God says to do-seek His face, get things right in their own hearts and expect God to do something wonderful,” he said.

The first thing that happened was the salvation of a 16-year-old boy who had been in some trouble. His grandfather led him to the Lord, and he was the first to make a public decision.

Chapman told the congregation he would be at the church from 4-6 p.m. each day of the revival to go visiting with laymen. Every day, when he got to the church, there were people waiting to talk to him about accepting Jesus as their Savior.

“They were coming to the church wanting to know how to be saved,” said Chapman.

Because of sharing the ACROSS Oklahoma materials the week before, everyone in town knew about the revival.

“People came, I think, because of the contact with First Church, and they had information in their hands,” said Chapman.

On Wednesday night after the final service, Chapman baptized 10 people, the first time the baptistery had been used “in a very long time,” he said.

After he returned home to Sayre on Wednesday night, Chapman said he had a message from the 16-year-old boy’s grandfather, who said the revival was still going on. The 16-year-old told a 17-year-old friend he wasn’t going to be doing the things he did before because he had trusted Christ and his life had been totally changed. The friend said he needed to be saved too, and the boy said, “Let me take you to my grandfather. He can tell you how.”

Earlier during the revival, one of the boys the 16-year-old had been fighting with also was saved. The two boys, who had been “enemies,” were baptized together.

“Praying, planning, being desperate for revival, then placing those packets on the doors and returning to visit in those homes produced something that can only be described as a great moving of God’s Holy Spirit,” said Chapman.

Participating in ACROSS Oklahoma was an easy decision for Oakdale Church located just south of Edmond. Carolene Walters is chairwoman for the church’s outreach committee, and has years of experience canvassing neighborhoods as a real estate agent. She jumped on the opportunity to use her skills to help attract newcomers to the Lord’s house. Under her leadership, Oakdale has become very active in making its presence known throughout the community.

“We started off distributing door hangers on approximately 800 houses. That number grew to 1,000, then 1,500 and to more than 3,000 with ACROSS Oklahoma,” said Justin Ford, pastor. “Carolene helps makes it happen. She is at the center of our outreach efforts.”

Oakdale is a different church than it was just a few years ago. Considered a rural church for years, the church now finds itself in the middle of one of Edmond’s fastest growing affluent neighborhoods. Church attendance has grown from 70 on Sunday mornings to more than 200 on a regular basis. Ford believes much of the growth is a result of their outreach into the community. ACROSS Oklahoma was the perfect strategy for Easter Sunday, he said.

“Our neighborhood is rapidly changing from a rural farming community to an affluent upper class neighborhood. It is exciting to see how the church is working together to reach the community,” Ford explained. “Sure, we could have mailed out all of the ACROSS Oklahoma materials, but there is just something special about being out in the community meeting our neighbors face to face. Plus, distributing the materials gives church members an opportunity to get to know each other better and to work toward a common cause. Knowing our efforts were enhanced by the evangelistic TV campaign of the Baptist General Convention of Oklahoma was the icing on the cake!”

Ford and Walters developed the church’s distribution strategy based on one person being able to reach 50 homes in two hours. As a result, 50 members from Oakdale reached more than 3,000 people in less than two hours during ACROSS Oklahoma.

In Minco, about 30 members of First Church met for breakfast and instructions from Pastor Steve Shelhamer in the family Life Center before dividing up into teams of three or four and hanging plastic sacks of information on the doors of 800 homes in the community of approximately 1,700 people. In addition to the four-color brochure provided by the Evangelism Group of the BGCO Church Outreach Team, the packet included the church’s basic informational brochure and fliers promoting its Easter program and June 18-22 Vacation Bible School.

Shelhamer was pleased with how the effort went.

“I think it went well; I was very much pleased with the effort our folks put forth,” he said afterward. “We were, I think, able to reach every home in town. We may have missed a few, but not many.”

The flier was Minco, First’s initial notification about VBS to area residents.

“That was just the first touch to let everyone know it is coming up,” Shelhamer said.

After Easter, church deacons will lead visitation to follow-up on visitors, the pastor said.

Churches in Kay Association got a head start on the ACROSS Oklahoma campaign by putting out yard signs.

“We decided we wanted a visible saturation of the cities and towns of the association in regards to the statewide promotion of getting out and sharing Jesus Christ during Easter,” said moderator Larry Nigh, pastor of Ponca City, Northeast. “These signs, which said, “Sharing Life Through Jesus Christ,” were placed in Ponca City, Tonkawa, Blackwell, Lamont, Red Rock, Marland, Shidler, Newkirk, Braman, Kaw City and Burbank.

“We placed the Kay Association Web site address at the bottom of the sign, so people could go there and find all the information about the campaign and how to be saved through the information called ‘The Most Important Thing,'” Nigh added.

In addition to putting out the yard signs, members of several churches in the association took the door hanger bags and information to local doors March 31.

“We ordered and distributed 5,600 yard signs to the 25 churches and two missions that make up Kay Association,” Nigh said. “My church took 300 signs for our congregation. The signs had to be folded over and stapled to the metal frames. We chose to make up all the signs for our people so they would not have to do so themselves. Our staff, secretaries and custodians did the work.

“As associational moderator, I feel we did a pretty good job of getting the yards signs distributed all over town. It’s kind of exciting to drive the neighborhood streets and see a positive promotion for Christ instead of all the political and business signs that usually occupy people’s lawns. I feel that signs have a made a positive impact upon our community and were worth the expense and effort.”