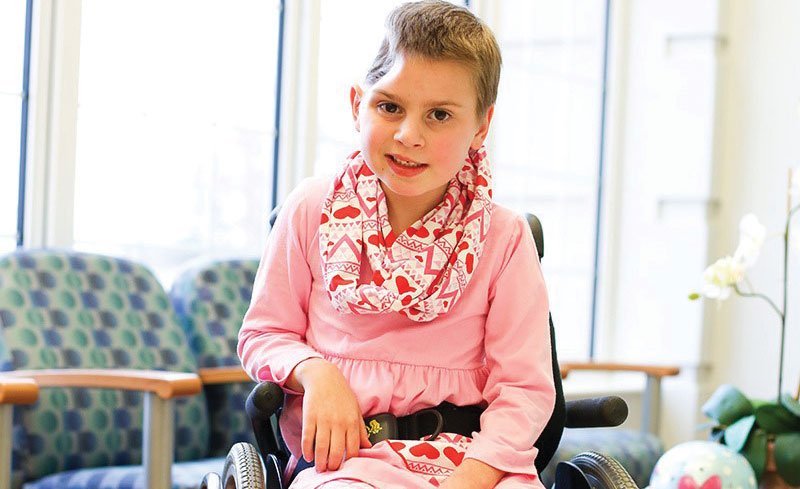 BETHANY—Jaimie Weihermueller was asked to describe how life has been since last November for her family, especially for her daughter Sophia.

“In two words I could say it has been terrible and beautiful. That encompasses all of our feelings,” she responded.

“She was writhing in bed and kind of screaming, saying ‘I need some medicine!’” Jaimie recalled from that early morning experience with Sophia, who is now 6 years old. 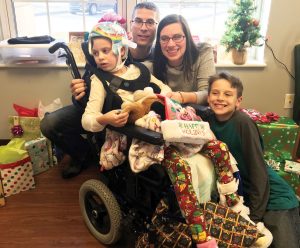 The Weihermueller family at Christmas time, from left, Sophia, Stefan, Jaimie and Philipp

Being a registered nurse, Jaimie could tell what was happening. “(Sophia) was unable to lift her left arm very well. My stomach just dropped at that point. I asked her several times and finally got her to smile and saw immediately that the left side of her mouth didn’t move.”

Jamie’s husband Stefan drove the family to the emergency room, and in the next several hours, Jamie said, they found out about Sophia’s brain hemorrhage. By 6 a.m., Sophia was in brain surgery to remove a clot.

Two days later, Jaimie said, Sophia had a stroke, affecting the whole right side of her brain. Another emergency surgery was needed to remove a malformation as well as a large piece of Sophia’s skull in order to allow her brain to swell. Sophia had to be placed in a medically-induced coma for three weeks while she healed.

After a month, Sophia was out of the coma, off of the ventilator and able to be transferred to the Children’s Center in Bethany where she continues to go through the rehabilitation process.

This is the timeframe Jaimie described as terrible and beautiful.

“It’s obviously been terrible because our life is so ‘other’ than what it was,” Jaimie said. “There’s been so much unknown and change and hurt, and you can’t stand to see your child suffering and her world in turmoil.”

So how is it also beautiful?

“It’s been beautiful because so many people have been there for us through prayer, through giving, sacrificing their own time to help us,” she confirmed. 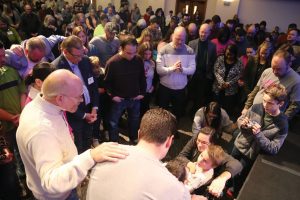 OKC, Putnam City gathered around Sophia and her family for a special prayer time during a recent Sunday service.

Jaimie’s co-worker is GinnyAnn Hemphill, whose husband Jeff is the discipleship ministry director at Oklahoma City, Emmaus. A friend from Jaimie’s Sunday School department is the daughter of the pastor of Crosbyton, Texas, First. Keith Haygood, music minister at Edmond, First, also has ministered to the Weihermueller family.

“The support we have gotten, it’s so humbling,” Jaimie said. “People from states away, countries away, have given an unbelievable amount of support. I’ve been in tears multiple times because of what people have done for us.”

Jaimie especially emphasized how important her Sunday School group at Putnam City has been, especially with financial support. They started a GoFundMe account, sold t-shirts that say #SophiaStrong, a social media hashtag they have adopted, and along with Cherokee Hills, they are having a community garage sale for Sophia in March.

But the support has not only been through serving and giving. Jaimie knows how important the many prayers for Sophia have helped. She especially appreciated Cherokee Hills Pastor Mike Keahbone who has asked his congregation on Sunday mornings to pray for Sophia. 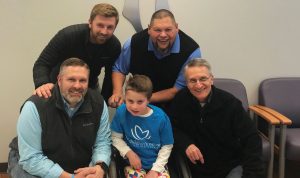 “We have been praying for her left side to regain function and continued brain improvement,” Jaimie said. “She is doing things we thought we’d never see or hear, so it’s a matter of patience. I know if it’s God’s will for her to walk again, I know she will. To use her left arm again, I pray that she will regain that.”

Jaimie said being a nurse has been both a blessing and a curse. Knowing more from her medical experience in what Sophia was facing has helped her understand this process, but she also is aware of the possible complications that can arise. However, Jaimie’s faith in God has helped her in those anxious moments.

“I honestly felt like God was telling me so many times, ‘Don’t rely on the monitor; don’t rely on the doctor; don’t rely on those things. Rely on Me,’” Jaimie said. “So many times I would be obsessed with staring at her heart rate or how many times she was breathing or all those things, and I would feel this instruction, ‘Cease striving and know that I am God’ (Ps. 46:10). That verse meant so much to me because I was striving so hard. I was putting my trust in the wrong things, and that continues to be a huge lesson for me. I need to put my faith and trust in Him and not the medical side of it.”

Sophia is now learning how to recover from her stroke at young age. But her mother knows faith in God and receiving support of especially many churches will help make “Sophia Strong” in the time ahead.

“To see the entire community of believers in general supporting you and praying for you, going above and beyond for your child,” Jaimie described, “that is what the Body of Christ is supposed to be like. I fully believe that everybody has lived up to that—being the hands and feet of Christ.”