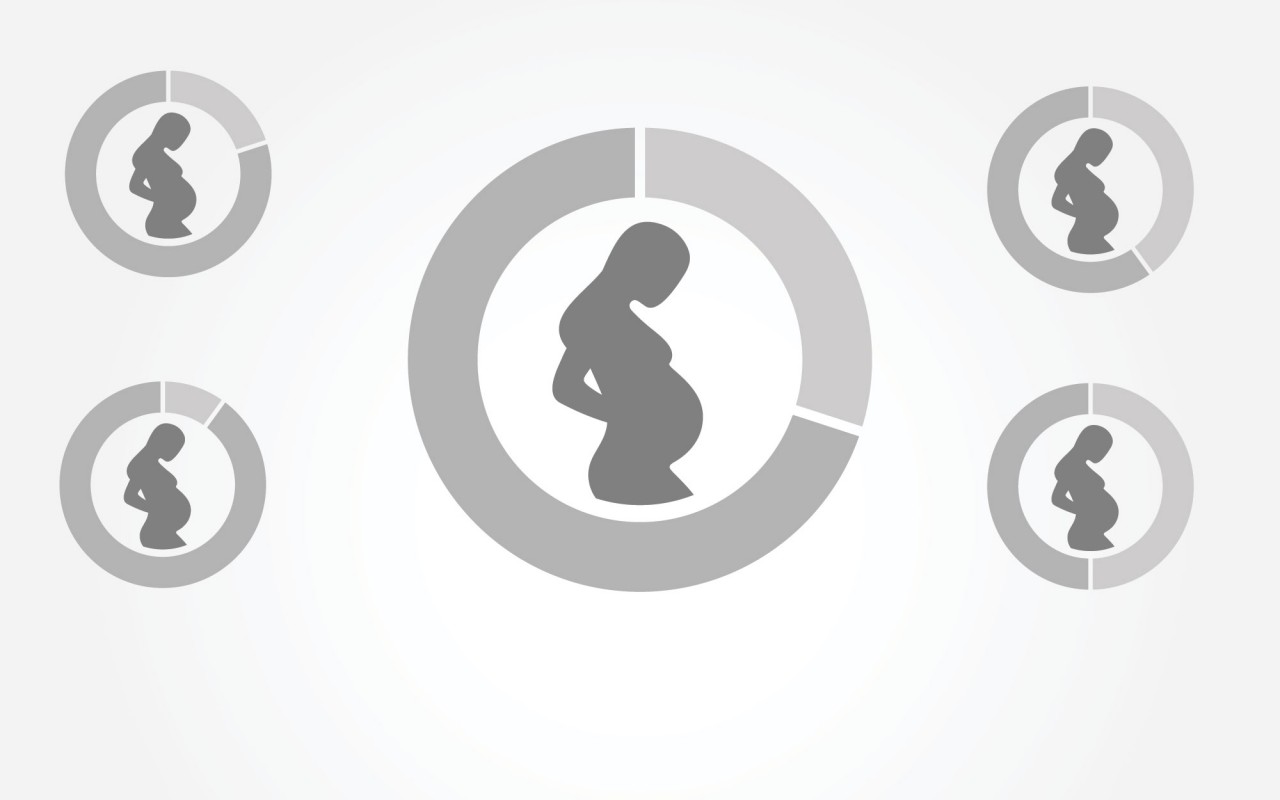 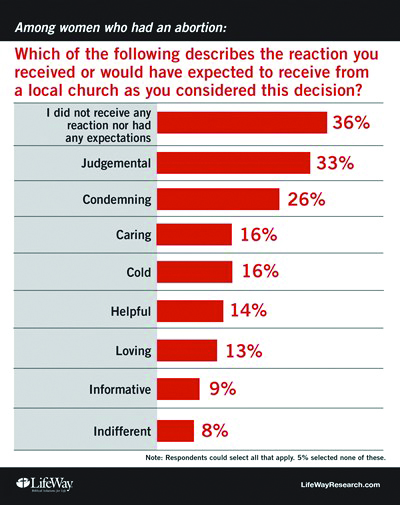 NASHVILLE (BP)—Many women with unplanned pregnancies go silently from the church pew to the abortion clinic, convinced the church would gossip rather than help, a study released Nov. 23 by LifeWay Research shows.

More than 4 in 10 women who have had an abortion were churchgoers when they ended a pregnancy, researchers found in a survey sponsored by Care Net, a nonprofit organization supporting more than 1,100 pregnancy centers across North America. The study features data from a survey conducted May 6-13.

“That’s a huge opportunity for the church to have an impact on those decisions,” said Scott McConnell, vice president of LifeWay Research.

But only 7 percent of women discussed their abortion decision with anyone at church. Three-fourths (76 percent) say the church had no influence on their decision to terminate a pregnancy.

The results point to a church culture that often lacks grace, McConnell said. Among women who have had an abortion:

• Fewer than half (41 percent) believe churches are prepared to help with decisions about unwanted pregnancies.

• Only 3 in 10 think churches give accurate advice about pregnancy options.

“Women are perceiving judgment from the church, and that’s probably partly because there are clear teachings in the Bible including about how and why we make judgments,” McConnell said. “However, if they don’t start experiencing something different than what they’ve seen in the past, these numbers aren’t going to change.” 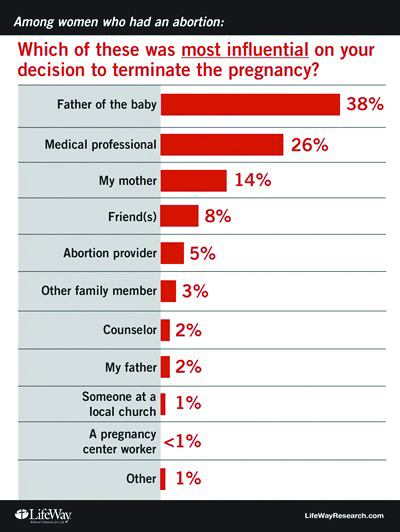 The church has connections with many women who choose abortion, Care Net and LifeWay Research found. In the survey of 1,038 women who have had abortions, 70 percent claim a Christian religious preference, and 43 percent report attending church monthly or more at the time of an abortion.

But distrust of the church’s response is widespread, the survey shows. Nearly two-thirds (64 percent) believe church members are more likely to gossip about a woman considering abortion than to help her understand options.

When weighing an abortion decision, women say they expected or experienced judgment (33 percent) or condemnation (26 percent) from a church far more than caring (16 percent) or helpfulness (14 percent).

Judgmental attitudes among even a few people in a church can discourage women from seeking help, McConnell said. “They’ll perceive everybody feels that way.”

Only 38 percent of women who have had an abortion consider church a safe place to discuss pregnancy options including parenting, abortion and adoption. And while 25 percent say they would recommend a friend or family member discuss an unplanned pregnancy with someone at church, more than twice as many (54 percent) say they would not recommend it.

Women keep silent in church both before and after ending a pregnancy, the study found.

“That tells you the environment of the church,” McConnell said. “You can’t say you’ve had an abortion, you can’t say you’re considering one—it’s completely taboo to discuss.

“But when a woman is willing to publicly acknowledge she’s had an abortion in the past, she will sometimes be approached by several other women in the church who’ve never been willing to share with anybody that they too have had an abortion,” he said. “It’s incredibly freeing for them.”

Church attendance makes a difference for many

Even among regular churchgoers, 52 percent of women who had abortions say the church had no influence on their decision. However, women attending church at least once a month were more likely to discuss their abortion decision with someone at church (16 percent) than those who rarely or never attend (2 percent).

“While much work needs to be done to equip the church to help women and men with their pregnancy decisions, there are positive signs that many churches will be receptive to efforts to implement programming that addresses this need,” said Roland C. Warren, president and CEO of Care Net.

“The survey shows that frequent churchgoers—people who know the church best—were significantly more likely to believe the church is prepared to provide loving, compassionate support for those considering abortion, especially those attending evangelical churches,” Warren said.

Supportive responses from the church are key, McConnell said.

“For most women with an unwanted pregnancy, if nobody is willing to say, ‘We’re going to help you through this,’ it’s hard for them to rationally say they should keep the child.”

Methodology: A demographically balanced online panel was used for interviewing American women. Quotas and slight weights were used to ensure the sample matched national totals for ethnicity, age, income and region. This nationally balanced sample was screened to include only those women who indicated they had ever had a pregnancy termination/abortion medical procedure. The completed sample is 1,038 surveys.