A blessed Board meeting: Dilbeck addresses board for 1st time as state exec, CrossTimbers NE announced

Addressing board members of the Baptist General Convention of Oklahoma (BGCO) for the first time since stepping into his role as BGCO executive director-treasurer, Hance Dilbeck shared what the Lord put on his heart and about his desire for the convention to serve local churches.

Dilbeck shared that he has been traveling across the state to connect with pastors and churches.

“We have such great people here in Oklahoma. I am doing a lot of listening and learning, and I am greatly encouraged by what the Lord is doing,” he said.

Plans for CrossTimbers Northeast in 2019 announced 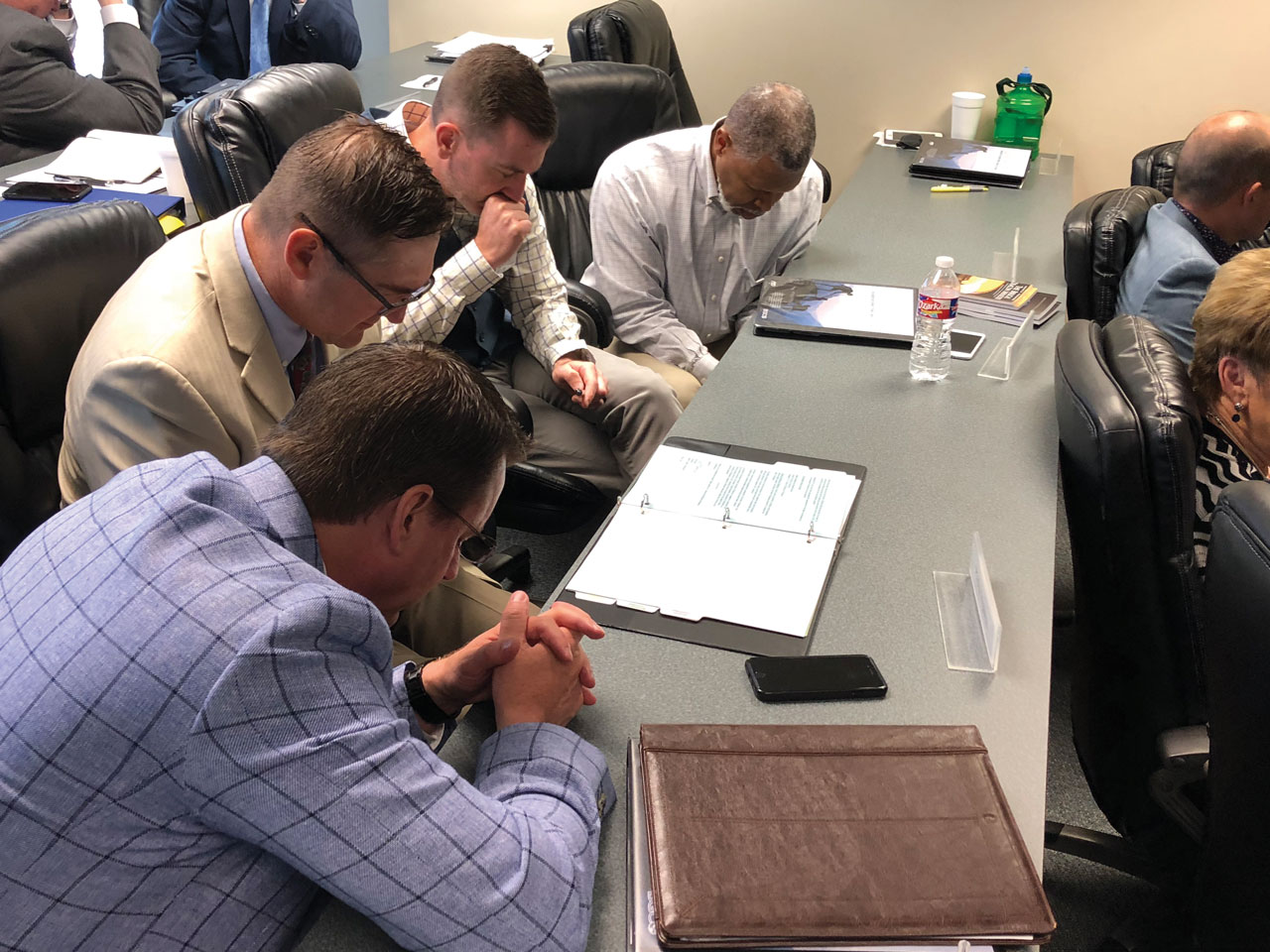 During the meeting of the board, the BGCO Equipping Team committee reported the BGCO will enter a five-year agreement for CrossTimbers Children’s Mission Adventure camps to be hosted at Grand Lake Baptist Assembly (GLBA) in Grove beginning in 2019.

James Swain, BGCO Equipping Team Leader said, “When the sad news that the acquisition of Tulakogee by the BGCO was unable to move forward was announced, the Lord opened up another opportunity to serve the churches in that region of our state. Scott Hill, director of missions in Northeastern Association, approached BGCO leadership about exploring the possibility of a partnership that would enable CrossTimbers to be hosted at Grand Lake Baptist Assembly beginning in the summer of 2019.”

“We will partner together with Grand Lake Baptist Assembly (to) use their camp to bring the CrossTimbers program (to northeast Oklahoma). What a great thing to expand the influence of CrossTimbers because there’s not an open spot at CrossTimbers this summer,” said Chris Fields, pastor of Clinton, First and chairman of the Equipping Team committee.

Along with camp sessions continuing at the CrossTimbers campgrounds in Davis, GLBA will host seven sessions in 2019. Camp dates will be finalized later in the summer.

During the morning session, board members spent time in prayer. A new feature for the meeting included a special time of discussion. Dilbeck asked each of the committees to think about church health and to discuss how to help “feeble churches.”

“Our Baptist predecessors talked about aiding feeble churches. Feeble does not refer to size or financial strength, but church health. There are large churches who are weak, and there are smaller churches who are strong,” he said.

During the afternoon reports, chairs from each committee shared thoughts and reflections from the committee members discussions.

“We love our churches. The future is bright, but the only place you can be is on your knees before God,” said Nick Garland, pastor of Broken Arrow, First and chairman of the BGCO Operations Team committee, regarding what pastors need to do to help in the strengthening of churches.

Bill Pierce, president of Baptist Village Communities (BVC), was the first leader of BGCO affiliates to report to the Board during the afternoon plenary session. He elaborated on BVC’s theme of “Serving God, serving you, serving together.”

Pierce also spoke on a recommendation to board members. The Board approved deleting a sentence from BVC’s bylaws, regarding the makeup of BVC board of directors, which states “At least one (1) director shall be from each of the areas of the state in which a Baptist Village is located.”

“When that bylaw was written, and I wrote it, we had seven villages,” Pierce said. “Today we have 12 villages. (The bylaw) used to affect a third of our board. Now it affects more than half of our board, and we can generally accomplish that requirement just by the other requirement that’s in our bylaws that board be geographically represented of the state.”

BGCO Board members approved the recommendation without dissent.

Robert Kellogg, president of the Baptist Foundation of Oklahoma, reported on the financial status of the Foundation and its distribution to different entities.

Dilbeck mentioned plans for the upcoming BGCO Annual Meeting, including its theme verse Eph. 3:20-21. He quoted this passage to point out God is “able to do far more abundantly beyond all that we ask or think,” and Dilbeck stressed, at the convention level, the importance to keep God at the forefront of decisions.

The next meeting of the BGCO Board is set for Sept. 11 at Falls Creek Baptist Conference Center.