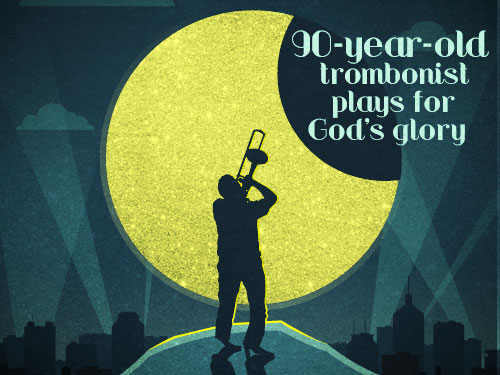 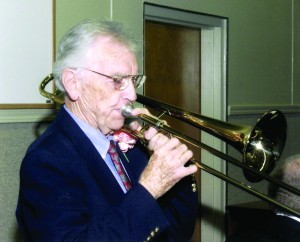 TULSA—Those who are familiar with Meredith Wilson’s “The Music Man” know that 76 trombones led the big parade. At Tulsa, Woodlawn Acres, a trombonist had led an Easter service for 76 years. And this past Easter was his 77th rendition of “The Holy City.”

Jack Griffin has been playing the trombone since he was 12. Now at 90, he resiliently moves his slide
every year to perform the song about the New
Jerusalem.

“I was raised by my grandparents, and my grandmother purchased my first trombone and a copy of ‘The Holy City’ when I was 12,” said Griffin, who is affectionately known as Dr. Jack. “When I was 13, she urged me to learn that (song), which I did, and I played it on Easter. Now, it just seems like it is one of those things I do every Easter.”

Only one time during this stint did he not play the song on his trombone.

“One Easter, my wife (Billie) sang, and I played the piano accompaniment,” he said.

“They know the accompaniment so well that they can do it by memory,” said Griffin.

This past Easter, another enhancement was featured. Kevin Wallace, minister of music, had the choir sing the final chorus of the song.

“My son, Mark, was on the tympani,” Griffin said proudly. “It was a robust finale and was well received, and our goal in (the whole performance) was to glorify God.”

The performance, though, was not without drama. Earlier in the week, Dr. Jack took a spill that required 16 staples in his scalp and an overnight stay at the hospital.

“I don’t know exactly what happened, but I did pass out,” he said. “One of my sons got a hold of EMSA, (and an ambulance) took me to the hospital.”

Even with the “war wounds” and the 16 staples, Griffin performed through it all, kept his playing streak going and played to the glory of God.

Griffin has been a member of Woodland Acres since 1980. Prior to performing at WABC, he also played “The Holy City” at Tulsa, Memorial and originally at First Christian Church in Tulsa.

For 40 years he worked in administration for Tulsa Public Schools, retiring in 1987. Griffin lives on his own, does his own grocery shopping and meal preparations.

When asked what is his secret for remaining active he said, “I give all credit to God and His watch over me. I don’t take any extreme measures, and I just enjoy life.”

About three times a week, Griffin meets with Dale, and they practice together. He said they enjoy playing medleys of hymns, such as “What a Friend We Have in Jesus,” “Near to the Heart of God” and “Near the Cross,” just to keep his embouchure up.

His wife of 66 years passed away in 2008. Dr. Jack gives credit to his children and how they have helped him in his recent years. He has two sons, Mark and Brad, who live in the Tulsa area, and a daughter, Beth, who lives in Irving, Texas.

“I can’t tell you how much they mean to me, in the way of support,” he said. “They never let me climb a ladder. I fell once and broke some ribs. That ended that. Now they take care of any maintenance I have around the house.”

Dr. Jack is an example of faithful service. His family is a demonstration of looking after parents when they are older (I Tim. 5:4). His friends and church family also are credited for supporting Dr. Jack and allowing him to faithfully perform every year. In return, everyone is blessed, and God must be pleased.