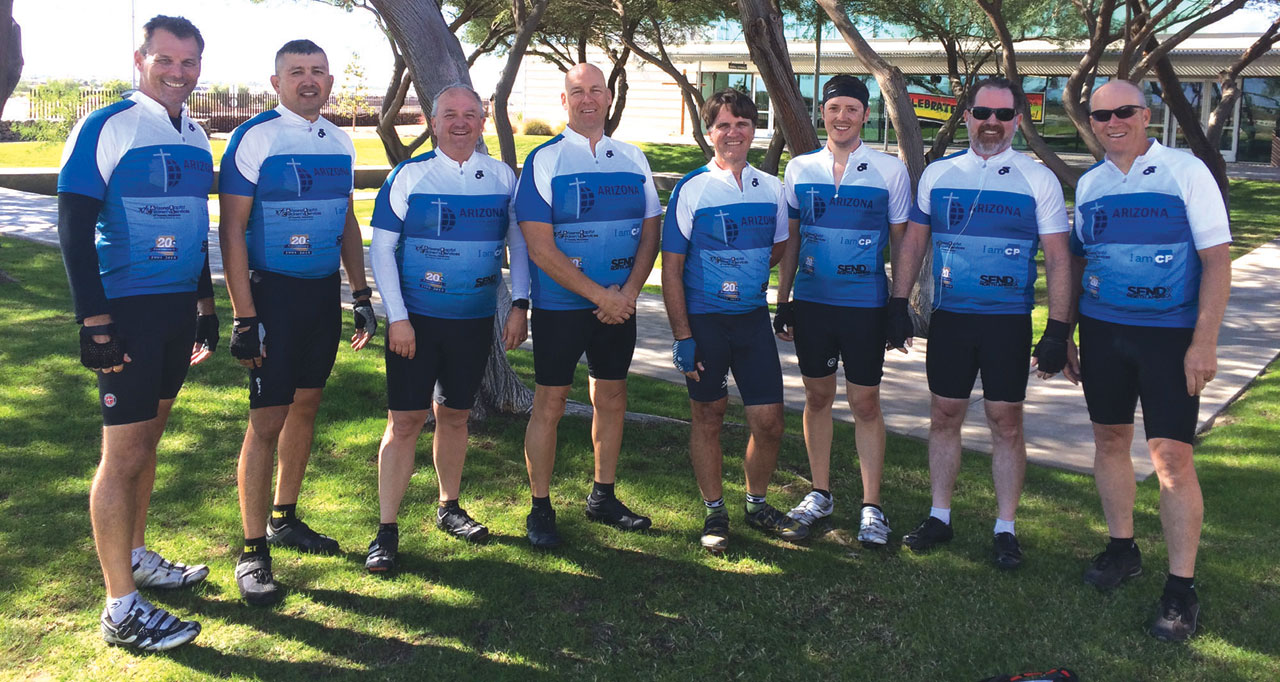 Their destination: Yuma, Ariz., Stone Ridge and the 2015 AZSBC annual meeting Nov. 13. AZSBC Executive Director David W. Johnson, an experienced cyclist, came up with the idea for the trek.

The eight riders represented organizations that benefit from or give through the CP: the Arizona Southern Baptist Convention, Arizona Baptist Children’s Services, Golden Gate Seminary, the North American Mission Board and Arizona churches.

For most of the year—save the scorching summer months that stretch into September—weather in the Valley of the Sun is ideal for cycling, and this day was no different. In the first leg of the ride, the men pedaled to Gila Bend, approximately 60 miles. But the following two days proved challenging.

“I learned a lot on this ride, not just about the guys I was riding with but about working together as a team,” Johnson told Arizona Southern Baptists, gathered for the annual meeting. “There is no way that I would have made it to Yuma without the team, and I think just about everybody on the team would say the same thing. We depended on each other.”

On the second day, the longest with 88 miles to cover, the team battled 18-mile-an-hour headwinds.

Pointing to Scripture printed on the jersey he wore on the ride, Johnson explained, “This was kind of a play off the movie “The 3:10 to Yuma.” Eph. 3:10 says, ‘…so that the manifold wisdom of God might be made known through the church.’ That’s the purpose of the church. That’s why we work together. That’s what we are trying to accomplish.”

Johnson invited the cycling team to join him on the platform and share their involvement with the CP.

Pastor Victor Berrelez said when he was called to lead Phoenix, Ariz., Mission Drive, the church was not giving through the CP.

“I challenged the people that if we’re going to be partners with someone, we should be partners all the way,” Berrelez said. “When it comes from the heart of the people to give to the CP, it’s a blessing. We want to be a part of missions. The CP does that. Even though we’re home and (missionaries) are out in the mission field, we take part in that blessing as well, and we pray for them.”

Monty Patton, North American Mission Board Send City coordinator for Phoenix-Tucson and lead pastor of Glendale, Ariz., Mountain Ridge, spoke of the importance of the CP to church planting.

If it weren’t for the CP, church planters would not be funded, resourced, encouraged, trained or sent out as they are at the current rate, he said. If Arizona Southern Baptists are to fulfill their Centennial Vision of starting 52 churches a year through 2028, “we need all of us to contribute to the CP, working together to see our state come to know Jesus Christ as Lord and Savior,” he said.