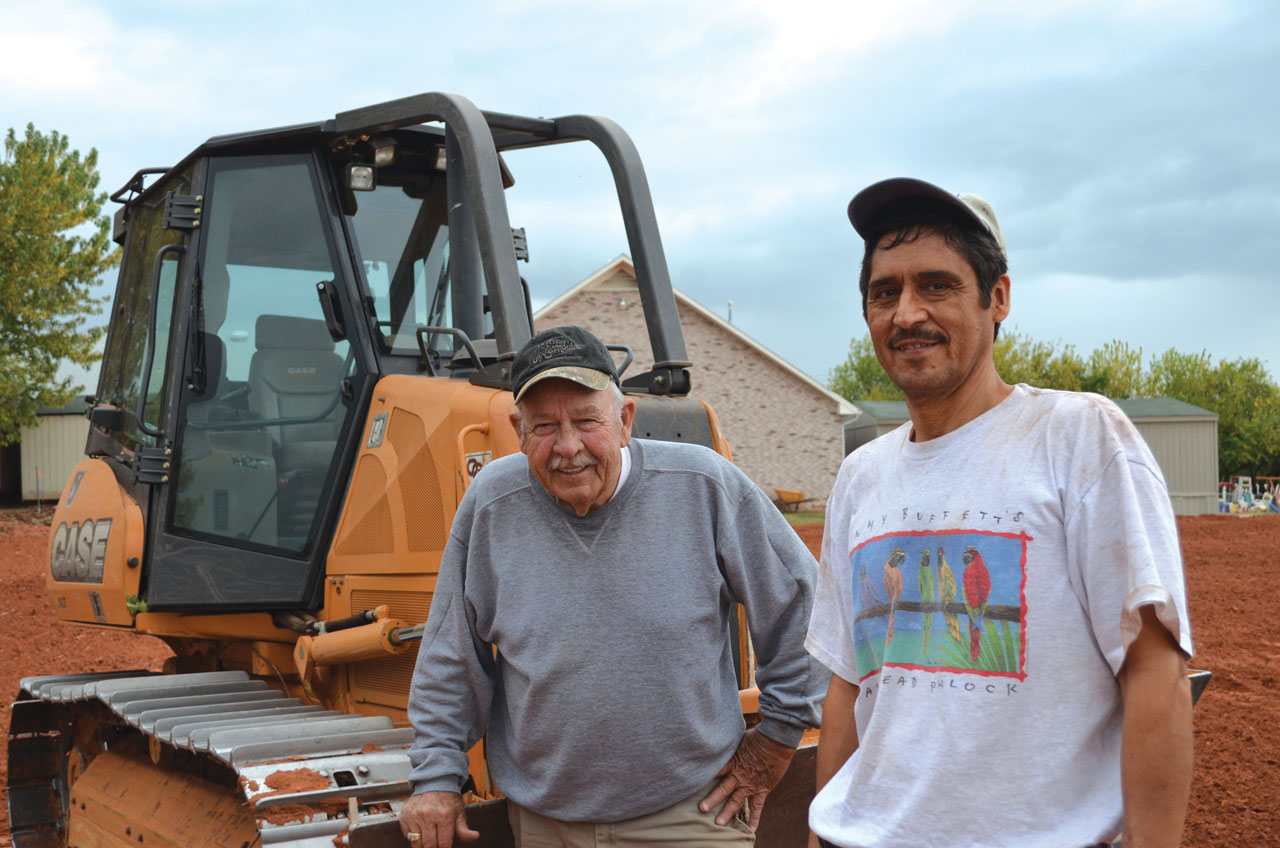 GUTHRIE—For years, Jim Wakeman, his wife, Melba Deane, and their three daughters used the same excuse many people use for not attending church.

For Wakeman, who was saved and baptized at age 9, his unfortunate and unusual experiences with a couple of congregations led him to abandon meeting with fellow believers for five decades, and it was only after Melba Deane passed away last April did he seek to reconnect with a body of believers.

Wakeman’s break with “The Church” began when members of the church his family was attending began to mock their clothing.

“It was kind of a shock,” admitted Wakeman, who turned 83 on Thanksgiving Day. “We had three daughters, and we were poor. Somebody said something about what the girls were wearing, which was some homemade clothes that their grandmother had made for them. And that really upset them because they were really proud of them, so I said, ‘Well some people are that way.’

“Then the next week, somebody said I looked like a farmhand from out of the field, or something like that. That kind of upset me, too. I had khakis on. So, I thought well, maybe we’ll find someplace else.”

“On Wednesday evening, three elders came to the house and they wanted me to give them our tithe. Well, that hit a nerve. I said, ‘No, I’m not tithing, and I’m not coming back to your church, anymore, either.’

“So, we tried another church,  but, we finally just quit going and drifted away for 50 years. We never quit believing. I tell people we never left Christ, we left the congregation. The same thing was going on in the second church that was going on in the first one. It seemed like everyone was interested in what everyone else was wearing more than what they should have been there for.”

A Korean War-era Navy vet, Wakeman later worked for the Oklahoma City Fire Dept. for 20 years (1955-75), retiring as a Captain, then put in another two decades with the Logan County Sheriff’s Dept. as a deputy (1975-95). But, his real love through all of those years was operating heavy machinery, specifically Case Equipment dozers and earth movers.

“I was a sinner the first 20 years of our marriage, and we just didn’t go to church,” he admitted. “After I got off the fire department and got on the Sheriff’s department, I was working most of the time, and we just weren’t interested in going.

“So after Melba Deane died, I decided that I needed to go back.“

He started attending Guthrie, Faith, where Charlie Loper, IT manager for the Baptist General Convention of Oklahoma (BGCO), is pastor. That connection has led to some interesting developments in which God is using Wakeman’s innate interests and talents he developed during his lifetime.

But, his life hasn’t been a smooth road by any sense of the word. He recalled that his wife and he used to have to go pick up pop bottles to sell to make ends meet in their early years together.

He graduated from Kingfisher High School in 1950, and married Melba Deane in 1951. She passed away on April 4, 13 days before their 64th anniversary. He cared for Melba Deane for four years as Alzheimer’s Disease slowly took her away from him.

“In 2010, I told my urologist, you have to take care of me so I can take care of Melba Deane as she gets worse, and he did.”

Wakeman wanted to join the Seabees during the war, but that didn’t work out, and he said he has always had an intimate relationship with vehicles of all kinds.

“I bought my first car when I was 15—a ‘32 Chevy convertible with a rumble seat,” he beamed.

“When I was a kid, I had an uncle who ran a  ‘dozer for the county. He and my dad were real close. He’d let me watch him run those big machines, and it just mesmerized me. Then, I went to a Boy Scout camp at Roman Nose when I was 12 and came home on a Sunday evening. The next day, my dad met me on the stairway early and said your grandpa is coming in here to meet you and you’re going to the harvest field.

“I got outside and my grandpa had a wagon and a team of horses that we hauled seed wheat to the granary. He had me scoop it off at the granary and then the next year they had me driving a tractor pulling a combine. And then the next year, I went to my other grandpa’s driving a tractor there. So, I started driving when I was 13, and I drove a pick-up when I was 13 hauling wheat to town. Nobody had a driver’s license, but during harvest, nobody even looked at you; they didn’t bother you. If you didn’t have a wreck, you were OK.”

Now in his golden years, Wakeman said he is happy to finally have found a church home where people love you for who you are, and not for what you wear.  He also said he is just one example of how no one is ever too old to be used by the Lord.

He has begun to use his heavy machinery expertise in a couple of ways. He said BGCO Disaster Relief Director Sam Porter has visions of him leading a team of heavy machinery operators.

“Sam has this idea of volunteers doing dirt work for churches, thereby saving them money,” Wakeman said. “Sam also asked me if I could build the pad for the new Disaster Relief Resource Center to be built at Moore, First, and I said, sure, of course.”

The first step, then, was the requirement for Wakeman to attend DR training and be certified. He did that by attending state training Oct. 3 at Oklahoma City, Grace Place.

Ironically, trainers there told him he couldn’t attend the skid loader (Small front-end loader) training because he was a first-time volunteer, so he became certified in maintenance for the large feeding unit.

A few weeks later, Wakeman met with Edmond, Hispanic Pastor Alfaro Orozco, who has dreams of building a new worship center for the church. The congregation had received a bid of $22,000 from a construction company to do the dirt work for the foundation of their building.

“A friend of mine who goes there asked me if they could hire me to do the dirt work for them cheaper,” Wakeman said. “I said, ‘No, but I’ll volunteer to do it if you rent the kind of equipment I like, which is Case.’”

When he was finished, Wakeman had completed the job for around $4,000, the cost of renting equipment and fuel to run them, a savings of some $18,000!

Meanwhile, Loper is grateful Wakeman has found a home at Guthrie, Faith.

“He started attending our church in search of some peace,” Loper said. “He joined a few weeks ago, and has become a very reliable and active member who still has a lot to give to us and to others.”